As corn follows in wheat’s footsteps and becomes more intensively managed, experts see growers leaning more heavily on their own self-propelled sprayers. And the need will be greater as growers push populations.

“More plants mean more potential for stress,” says Below. “With higher populations come the challenge of balancing nutrition and managing stresses like disease and insects.

“We need to get high-clearance equipment down narrow rows with fungicides to manage stress. Aerial applications of fungicide require the use of an adjuvant that can harm crops if applied before flowering. With a ground rig, you can leave out the adjuvant, apply earlier and prevent stress.”

Wollenhaupt says sprayers need to be able to work in crops that are 7- 8 feet high to spoon feed nutrients and for fungicide and insecticide applications. “We need to allow for machines to work taller,” he says.

Cox credits foliar applications with taking his yields to a whole new level. When he started the practice, his competition plot yields jumped from 260 bushels up to 289 bushels in 2003 and have been over the 280-bushel mark ever since.

To determine what goes into his foliar applications, Cox relies on tissue samples to determine micronutrient needs. Sensing technologies could be used to get that information more quickly. “

Sensors can be used as field scouts,” Reis says. “They can be attached to the booms and scan the crop during a post-emergence herbicide application and then create a vegetative index map to show where healthy or weak plants are.” 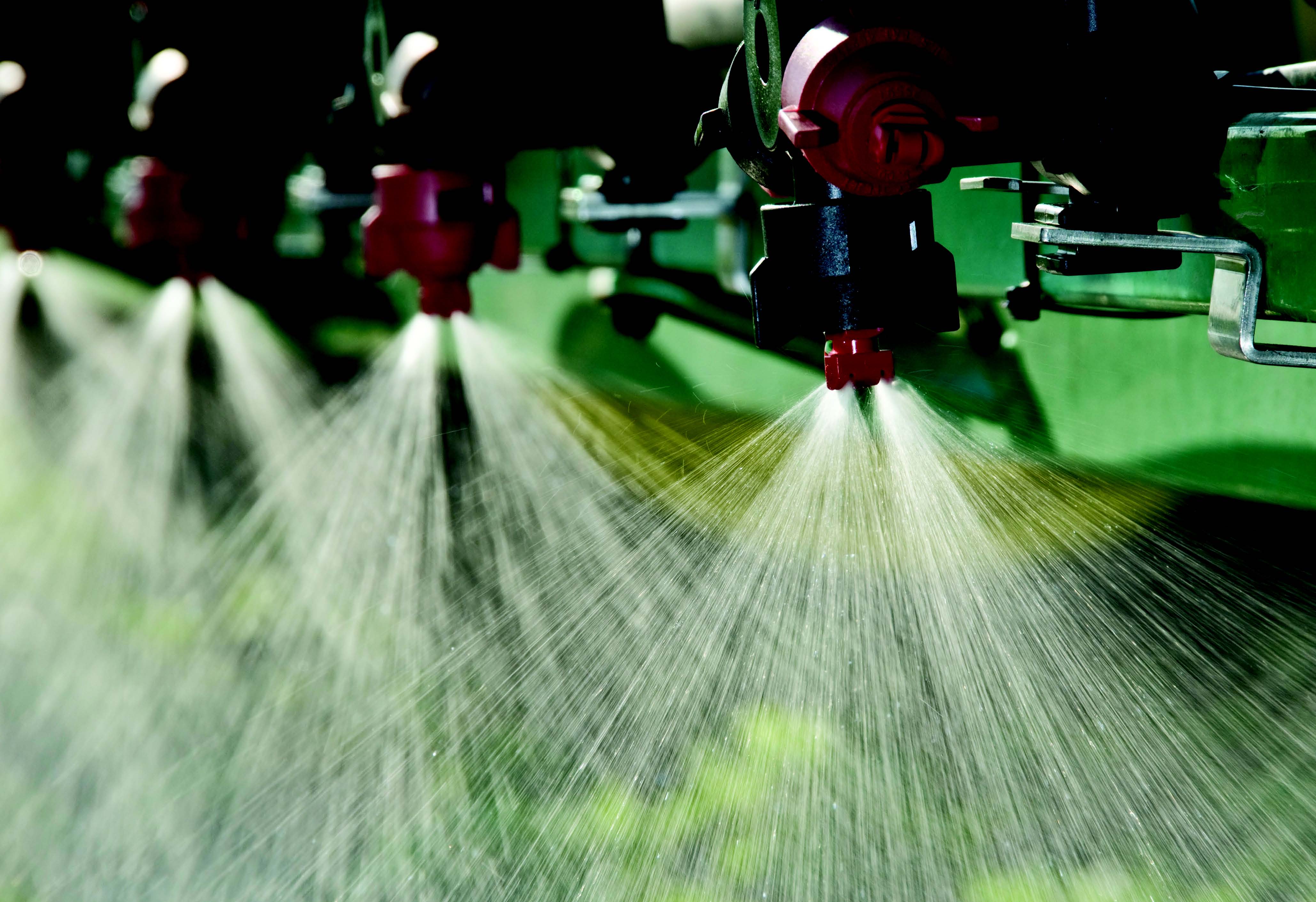 To achieve his 320-bushel contest yields and 220-bushel across-the-farm average yields, Jerry Cox of Delta, Mo., makes 3-4 trips over his fields applying herbicides and spoon feeding fertilizer. He credits foliar applications with taking his yields to a whole new level.“

Reis says this information can be used to determine areas for more precise crop scouting. “Once the crop is scanned and the farmer or agronomist has a map, they can go to that area to determine if there is a pest infestation, if there is a nitrogen deficiency or other problems causing unhealthy plants.”

In addition to scanning, the sensors can be used to determine nitrogen deficiencies in real time and apply variable-rate nitrogen applications on the go. This application would happen at the time of sidedress. One area for future improvement is that with sensing and foliar applications it’s currently impossible to do row-by-row precision in variable-rate application.

“Only 3-4 sensors are used to scan the width of the boom and then one average recommendation is made for rate throughout the entire boom,” Reis says. “The sensors can be used with automatic boom section control to avoid overlaps, but you don’t have variable rate nitrogen prescriptions between boom sections.”

“It’s putting nitrogen where it’s needed based on what the plant is doing at that time,” Reis says. “Crop sensors can give a yield bump. The total nitrogen investment may not decrease, but the nitrogen being used is going where it’s needed. And that can be determined in real-time, unlike soil or tissue tests.”

As with other precision equipment, growers may currently lack the knowledge and access to sensing technology. Cox says that he would like to try sensing technology, but is concerned that there isn’t currently sufficient tech support or qualified repair facilities in his area.

Being able to vary the rate or type of herbicide on the go is something the application industry is working toward. But it may require recycling some old technology.

“Chemical injection systems are going to become a player again,” says Kevin Covey of Equipment Technologies. “Producers can use it to apply more or different chemical in areas where there is a heavy weed population or a different species.”

Chemical injection sprayers carry chemical and water in separate tanks and pump it to the nozzles for mixing just prior to application. This technology was looked at in the early 1990s as an option for developing variable-rate herbicide applicators. Challenges arose for variable-rate herbicides as significant time delays in changing concentrations occurred as the chemical moved through the spray boom. This resulted in significant areas of misapplication. One study suggested injecting chemical into the carrier at the nozzle body to avoid delays.

While the chemical injection system itself can be used to quickly and easily switch between chemicals or between rates for spot treatment, it’s not a true variable rate application, which is where Covey thinks spray application is headed next.

“Chemical injection needs to be improved upon,” Covey says. “It needs to better integrate with the machine.”

Even further out may be the ability to use sensing technology to automatically determine weed type and pressure for accurate weed control.

In addition to being tall, sprayers need to be able to operate in the narrow or twin-row situations that will likely drive 300-bushel yields. Paul Nielsen of Equipment Technology says narrow rows will almost certainly require auto-steer technology with RTK accuracy.

“In narrow rows, a lot of people can hit the middles when the crop is 2-3 inches tall, but as the crop grows and the middles close in they can’t see where they need to be and start running over their rows,” Nielsen explains. “Without precision, producers will start to lose what they were trying to gain with the narrow rows.”

Narrow rows mean narrow tires, too. This can be a challenge as producers push toward larger rigs to increase application efficiencies. But the drive for fewer refill trips could cost them in yields.

“When driving through narrow rows, if the ground is wet the tires want to go down. When that happens, the soil pushes up onto smaller crops or displaces roots of larger crops,” Nielsen says.

“We need to maintain capacity while running lighter machines so we can use narrower tires.”

One way to do that is to adjust the drive system. Hydrostat machines have a heavy wheel motor on each wheel. Nielsen says Equipment Technology’s Apache’s mechanical drive, power-shift transmission system doesn’t use wheel motors and weighs 2-6 tons less than equivalent hydrostat sprayers.

“With lighter machines we can run narrower tires down narrow rows without the same compaction problems,” he says.

More precision is necessary, too. “Under or over application of fertilizer or chemicals will rob yields just like overplanting or skips,” Nielsen says. “The more boom sections a producer can shut off across the width of the machine, the smaller the section will be and the greater the accuracy will be.”

He says top-end producers are already able to control up to 10 sections and there are companies working on individual nozzle control. With greater control comes the need for greater accuracy in guidance. While WAAS (Wide-Area Augmentation System) can provide good pass-topass accuracy, he says the sub-inch repeatability of RTK becomes necessary. Otherwise, nozzles will turn off and on at the wrong time due to any number of errors.

“Generally, when running a WAAS system we’ll tie several nozzles together on the outside rows to dumb up the machine so it won’t make those mistakes,” Nielsen says. “If you want the machine to truly be precise, you’ve got to use RTK.”

Making these technologies react faster will push yields even further.

“The technology is good now, but it can be better. Just think of how fast your computer was 5 years ago as compared to now,” Nielsen says.

Sprayers Will Shift Focus from Drift to Precision Placement