One Year Ago: Deere Employees Go on Strike

Negotiations between the union and Deere had begun in August 2021. After 90% of union members had rejected the first proposed contract agreement on Oct. 11, the parties had had until Oct. 13 at 11:59 p.m. to reach an agreement.

A report at the time from the Wall Street Journal, "the striking workers make up more than one-third of Deere's 28,000 employees in the U.S. About 4,000 production workers at non-union plants or represented by other unions remain on the job, the company said. Deere has about 14,000 management and administrative employees."

Announcements posted on Deere's One Deere production and maintenance employee website on Oct. 12, 2021, had stated "Under the tentative agreement, John Deere made the best wages in the agriculture and construction industries even better. How? By increasing wages and adding things like a cost of living adjustment and lump sum payments, your annual earnings are projected to grow significantly today and over the life of the agreement." 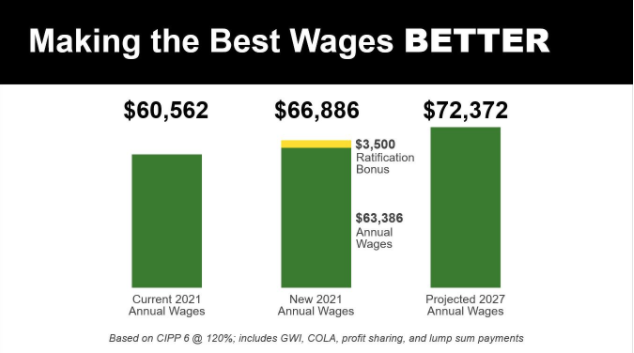 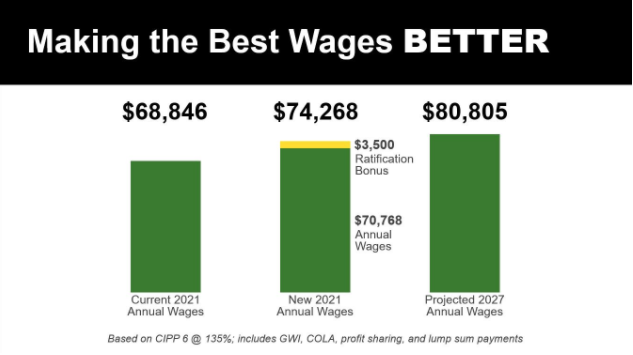 The strike would continue for over a month and require 3 different tentative agreements before the last one was ratified by 61% of UAW-represented John Deere employees. A press release from UAW on Nov. 17, 2021, stated, "The agreement includes an $8,500 signing bonus; 20% increase in wages over the lifetime of the contract with 10% this year; return of Cost of Living adjustments; three 3% lump sum payments; enhanced options for retirement and enhanced CIPP performance benefits. Healthcare remains the same for the life of the agreement." Operations began that same day at the striking factories.

Below if a timeline of how some of the key events during the strike unfolded, as covered by Farm Equipment's sister publication Ag Equipment Intelligence. Click on each subhead to be taken to the full coverage of that event:

As a follow-up to the impact the John Deere/UAW strike had on dealers, a survey from Ag Equipment Intelligence conducted from Jan. 5-7, 2022, asked dealers of all brands how the strike had impacted their business, what they learned and what the strike might change in the industry.

A November report from the Des Moines Register (UAW members won big gains in their strike of John Deere. Will other Iowa workers follow?) quoted a Bloomberg Law database in saying UAW Deere workers' 10% wage increase won in the recent contract is more than triple the average raise a union worker receives in a new agreement.

Bob Tita, in a recent article for the Wall Street Journal, quoted William Blair & Co. in saying the recent strike by UAW workers likely cut Deere's production "by 10% to 15% in both its fourth and first quarters."

According to a press release from UAW, by a vote of 61% to 39%, UAW John Deere members have ratified the latest tentative agreement from John Deere.

A report from the Waterloo Cedar Falls Courier quoted James Cooney, employment law expert at Rutgers University, as saying "an official, best and last offer could signify Deere is at an impasse in negotiations."

Deere Increases Number of Employees at Parts Fulfillment Centers by 60%

A report from the Des Moines Register cited a Barclays report when reporting that, "...cell phone location tracking found that Deere actually increased the number of workers at parts fulfillment centers by 60% in the weeks after the strike began, compared to the same period in 2019 and 2020."

Included in the letter emailed by Rebecca Guinn, factory manager at John Deere Waterloo Works, on Nov. 9 to 150 local business and elected officials was a 7-page PDF of “John Deere-UAW Negotiations Update.”

A report from CNN quoted Deere's Chief Administrative Officer Marc Howze as saying importing products from its international factories to fill U.S. orders was something the company is "exploring."

A recent poll from Ag Equipment Intelligence found that 92% of Deere dealers forecast some degree of aftermarket revenue loss should the strike continue through the end of the year.

A press release from UAW stated that by a vote of 45% yes to 55% no, UAW John Deere members voted down the agreement on the evening of Nov. 2.

A recent poll from Farm Equipment showed that roughly 54% of dealers do not support the strike, while 37% said they did and 8.5% weren’t sure.

A summary of the second tentative agreement between John Deere and UAW recently posted on Facebook by UAW Local 281 reveals upgraded wage increases, including a 10% raise in Year 1 and 5% raises in Years 3 and 5.

Deere failed to reach an agreement with its workers and the UAW on a new labor agreement, resulting in 10,000 workers going on strike — the first time Deere employees have gone on strike in 35 years.

A press release from United Auto Workers states 90% of its John Deere members rejected a tentative agreement the union's national bargaining team had reached on Oct. 1.

A report from the Quad City Times stated Deere employees represented by United Auto Workers Local 865 had passed a strike authorization on Sept. 12 as part of ongoing contract negotiations with Deere. The vote does not call a strike but instead gives the union the ability to call a strike on the workers' behalf should they feel it necessary.

Deere Announces 4Q Earnings Down 20% vs. Year Ago