Are We Headed Back to the 2014 Used Equipment Glut?

According to Iron Solutions’ Director of Data Services and Software Development Cameron Hurnard, things aren’t quite as grim as they were 8 years ago. However, some of the same issues that caused the 2014 used equipment glut need to be monitored now and in the future.

Many dealers remember how used equipment began to sit on lots in 2013-14, driven by rising commodity prices, low input costs and a notable increase in the supply of new equipment. This spelled trouble for the used market, with some equipment sitting for over a year before it moved. And with 2022 opening with some of the same signals (high commodity prices, strong demand for new units), Director of Data Services and Software Development at Iron Solutions Cameron Hurnard raises the question: are we headed right back to where we were in 2014?

The short answer is: probably not. Not all the parameters that caused the glut in 2014 are present now, particularly low input costs and producers’ gross revenue surpassing their costs. However, it’s worth looking back at what triggered the oversupply of used equipment then and examining the indicators that could help the industry avoid a similar situation in the future.

“We had very high commodity prices, and we had low input costs. Producers were making money,” says Hurnard. “We also started to see manufacturers try to take advantage of the situation, with producers having money in their pocket and looking to spend it. We ended up with above average demand, and manufacturers were able to ramp up their production to meet that demand. Then we may have ended up with a little too much supply.

“We had a lot of excess supply at the time and ended up with a push market. So manufacturers started to try to come up with ways to entice producers to buy. We saw roll programs come out and multi-unit discounts, so we managed to sell new equipment maybe to producers who didn’t necessarily need it.”

According to Hurnard, this push on new equipment led to a wave of trades coming in, which didn’t see the same demand as the new equipment.

“We saw lots of used equipment sitting on dealer lots for long periods of time,” he says. “There’s stories of producers coming in to trade their new combine, and the one they had traded last year was still on the lot.”

To learn more and to watch the webinar presentation of this data, click here

Looking at the numbers from 2013 and comparing them to 2021 (see table below), the data shows the same dangers that were present then haven’t quite appeared the same way today. 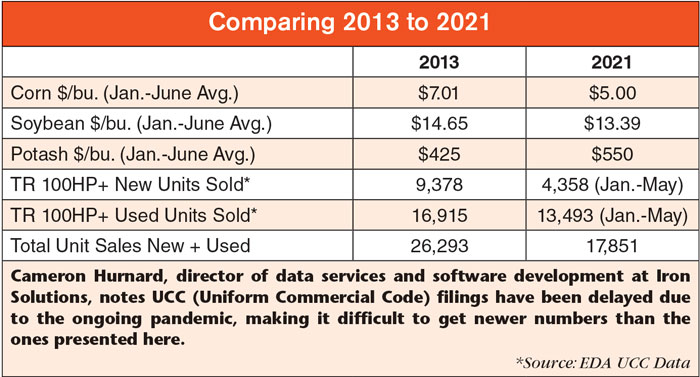 “Let’s also look at the ratios. That’s important as we try to figure out if we’re heading back into a 2014 scenario,” says Hurnard. “In the first half of 2013, 64% of total sales were used equipment, but now looking forward to the first 5 months of 2021, we’re seeing that used makes up 76% of sales. This is good for dealers not being hung out to dry with used units.

Hurnard also examines producer finances going back to 2012 (Fig. 1). He emphasizes producers were making money just before the 2014 used equipment glut but aren’t breaking even currently. 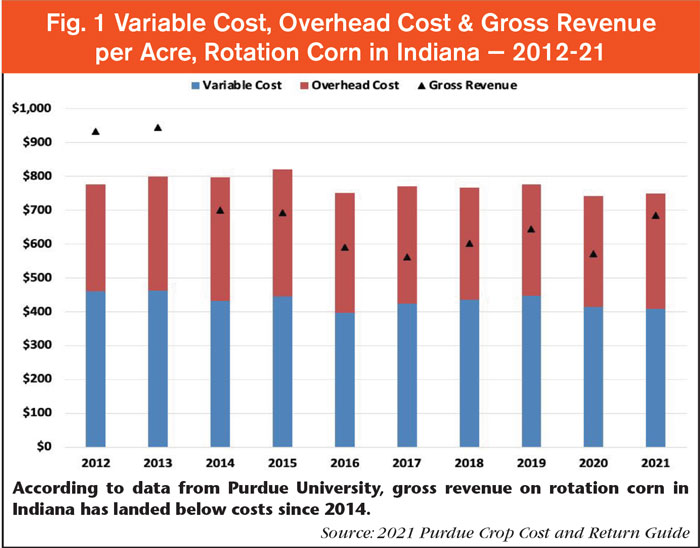 Hurnard predicts fertilizer costs will continue to rise, which will slow demand for new and used equipment (Fig. 2). 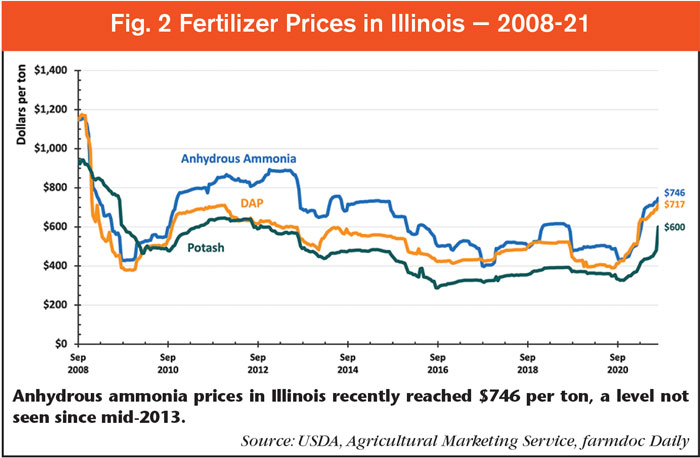 “Fertilizer was close to $450 as we said earlier, and now we’re heading north of $600,” he says. “I think these input costs are going to continue that significant upward trend, and that’s really going to hit producers hard.”

Using Iron Solutions’ sold reports, Hurnard shows that the number of days used combines (specifically class 7-9 combines less than 5 years old) spend on dealers’ lots has been declining since the end of 2019 (Fig. 3). 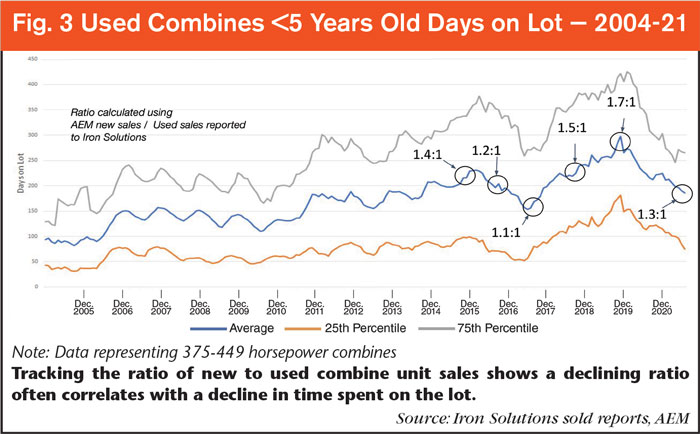 The data shows the average number of days used combines spend on lots rose again from 2017 to 2019, ending at around 300 days.

“What I find encouraging is this sharp downward trend in the time equipment is spending on lots right now,” Hurnard says. “Strong performing dealers are back to the 60-75 days range.”

Hurnard points to the end of 2015 on the average dealer line, where the ratio landed at 1.4:1.

“At that point, used combine were sitting for about 225 days. As that ratio dropped, so did the time on lots until we got down to about 1.1:1, then we’re back to 150 days,” he says. “I think it’s a great idea for dealers to track this in their own inventory and use it as one of their indicators.

Hurnard also examines Iron Solutions’ index value of used combine retails (Fig. 4, red line), which he describes as, “representing the change in month-to-month retail selling price of used combines, adjusted for hours and age of equipment.” The index is also adjusted for seasonality, and Hurnard says these adjustments make for a more accurate comparison. 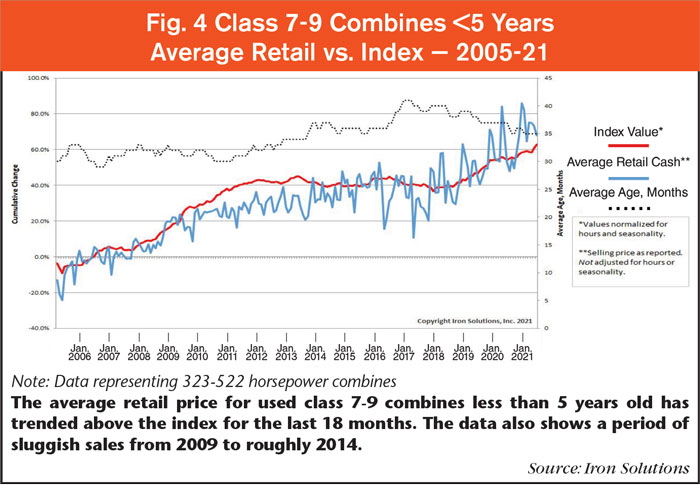 “Over the last year and half, we’ve seen pretty strong demand and a lot of upside in the class 7 to class 9 combines that are less than 5 years old,” says Hurnard. “Combine age has also been fairly steady in that same period, right around the 3 year mark.”

Narrowing it down to just the class 7 combines (Fig. 5), Hurnard sees strong demand and doesn’t see it ending any time soon. 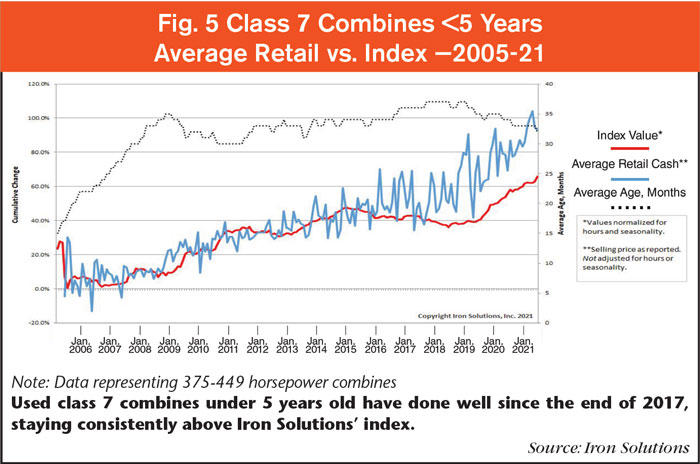 “As we look at the index number, since back toward the end of 2017, we consistently see demand on this segment has been strong and retail prices have been good,” he says. “We can see this trend start to come down a little bit over the last 3-4 months, but I don’t see any sign of this dropping off anytime soon.”

Looking at even older combines in the 5-10 year range (Fig. 6), Hurnard sees good news again in the amount of time equipment sits on lots decreasing. “We look back at 2013, just before everything took off, and we were right on that 200 days mark,” he says. “We hit a peak in summer of 2019, but now this segment is trended down pretty sharply over the last 12-15 months, almost back to that 200 days mark. 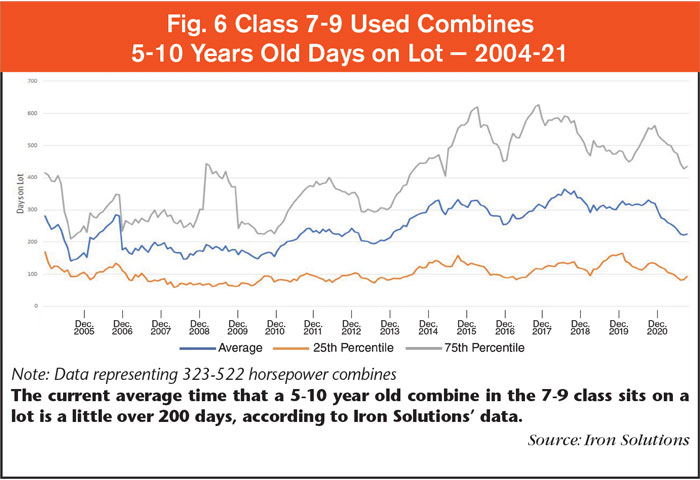 “This tells me equipment is moving back the way it should and not sitting on the lot long. There’s good demand for 5-10 years old combines right now.”

Switching over to the 4WD tractor market, Iron Solutions’ data once again shows a recent decline in the time units that are less than 5 years old spend on dealers’ lot (Fig. 7). 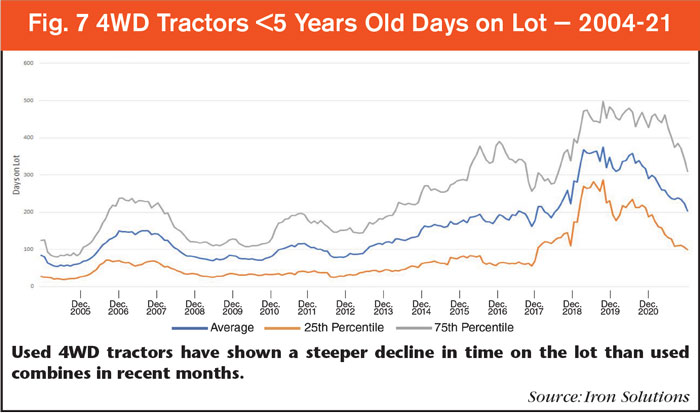 “We see a steady climb since 2013 that reached its peak around 2018. But now we’re seeing very significant demand, and these units are getting cleared off the lot much quicker than they had been,” Hurnard says. “We’re still not back to that magic number, probably around 100 days on the lot, but the trend is very strongly downward, and I don’t see any reasons for this not to continue. Perhaps by the end of 2022, we’ll get back to the 100 days mark.”

According to Hurnard, average retail pricing for used 4WD tractors, when compared with Iron Solutions’ index (Fig. 8), spells the same story as their time on lots: demand is strong. 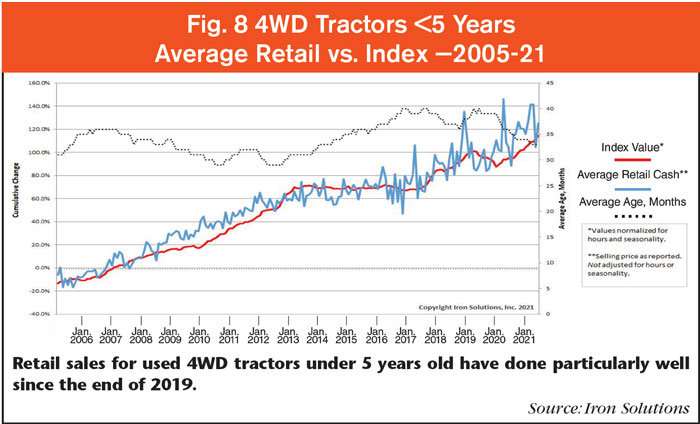 “We’re seeing average retail cash sitting well above the index number for the past 24 months or so,” he says. “This tells me once again that we’ve got good demand for these bigger units, particularly the newer ones. That should continue.”

When examining the time that older used 4WD tractors sit on lots, Hurnard notes a similar pattern to the younger units, where time trended up in 2013, peaked in 2017, rose again in summer 2020 and then started
trending downward.

“On this chart in particular (Fig. 9), what I find interesting is the strong-performing dealers [orange line] being able to keep these times right around 50 days,” says Hurnard. “They don’t have any problem moving these 5-10 year old units. 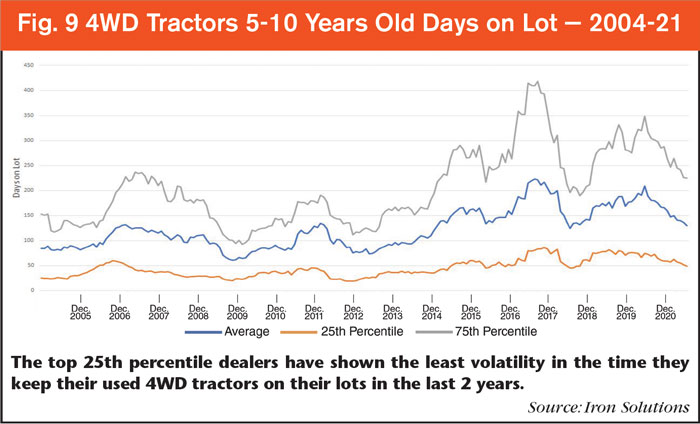 “If you’re not using all the tools you have available to you, that’s when you can run into problems getting these moved, but even that is starting to change now. Everybody’s moving 4WD tractors fairly quickly. I think we should be back to the 100 day level here in 6-8 months or so.”

“Are we heading for 2014 all over again? Our feeling is probably not,” concludes Hurnard. “We have high commodity prices, but they are still below what we were seeing in 2014. Another thing is increases in input costs. The struggles we’re seeing in the supply chain too is probably going to lead to more increased costs, which is going to temper the demand for units. It’ll slow down on new and used. Producers’ gross revenue is now dropping off because of this, and I think that is going to probably limit any more additional equipment purchases.”

The real “savior,” as Hurnard calls it, is the below average new unit sales, which will stave off a wave of used equipment hitting dealer lots.

“We don’t have the same situation with the manufacturers either, just pushing hard to get new equipment out the door. I think that’s going to be beneficial to us. People may end up hanging on to their used units a little longer.”

Hurnard also points to the increased demand for newer used units, which he believes will help moderate the increasing inventories on the used side.

Particularly for dealers noticing a growing ratio between their new and used units sold, Hurnard recommends putting programs in place to limit sales of new equipment.

“I don’t think we’re to that point yet, but it’s certainly something to be watching for. If you really see if starting to change, implement some processes to keep it in check.”

[Podcast] Are We Headed for a Recession?

[Podcast] Are Back Up Machines the Solution to Parts Shortages?