When Henry Ford Didn’t Have the Bucks

By Frank Lessiter posted on December 16, 2021 | Posted in Manufacturer News

Excerpt from "Centennial Farm: How Six Generations Farmed the Land"

It was the summer of 1902 when a gentleman farmer from Detroit stopped at the Lessiter family farm to look over a small group of young Shorthorn bulls advertised for sale.

My grandfather Frank and his brother, Floyd, ("Uncle Jay") had heard of the "Detroiter" be­fore-he was known pretty much as a "crackpot" because of some of his crazy ideas.

Yet he later became one of America's most successful and richest businessmen.

The gentleman farmer was Henry Ford and his visit to our family farm came less than a year before he began rolling his "horseless carriages" out of an old converted wagon factory in Detroit.

The amusing details of how Ford happened to come to our farm on his bull buying trip is a story that has been passed down through five generations of our family over the past 90-plus years.

As I heard the story from my Dad and Grandmother Norah, Ford arrived at our Lake Orion farm after a 35-mile journey north from Detroit in what was a forerunner of the company's most famous car-the cele­brated Model A. He was still ex­perimenting with the machine at that stage and he came with a mechanic who did the driving. 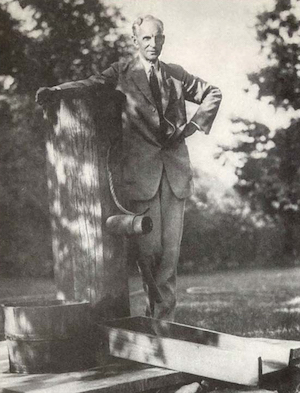 Before he ever was an automobile manufacturer, Henry Ford v,as a gentleman farmer near Dearborn, Mich.

There apparently were many problems with the car during the half-day jaunt. After arriving at the farm, the mechanic spent all his time tinkering with the can­tankerous horseless carriage while Ford looked over the Shorthorn cattle.

As Dad tells it, neither Grand­father Frank nor Uncle Floyd were very impressed with what they saw—which was one of the very first cars either of them had ever seen up close.

Anyway, while the mechanic worked on the car, Ford and my Grandfather and Uncle Floyd walked into the pasture to look over a group of young Shorthorn bulls. The family herd had been winning quite a fe\v blue ribbons at various fairs around the state which was what attracted Ford to our cattle breeding program. 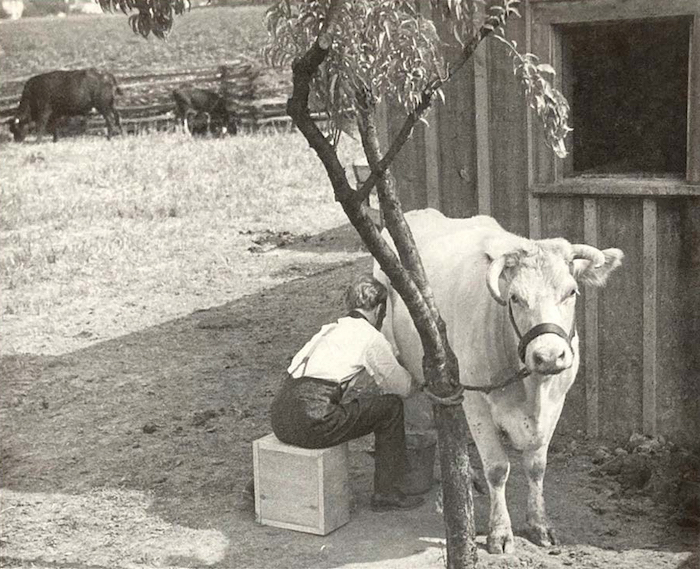 Henry Ford operated a general farm which also included a herd of valuable Shorthorn cattle, the reason he visited the Lessiter family farm back in 1902.

Once in the pasture, Ford fi­nally selected a young yearling Shorthorn bull he liked. After the three men did some serious haggling, they finally agreed on a price for the bull. Then the fireworks really got started!

Ford wanted to write a check just large enough to cover a down payment and arrange an installment contract for the re­mainder. My grandfather and Uncle Floyd would have none of that—they were a little wary of Ford in the first place, and in­sisted on cash for the bull!

Ford wouldn't relent—trying to launch his car company at the time, he was short of cash and kept insisting on negotiating an installment deal on the bull.

When the three men couldn't agree on financial terms, the bull kept grazing in our pasture.

Ford stomped back to the car and told the mechanic to finish adjusting the car's engine, be­cause they were leaving! They soon took off in a huff. That was the first and last time Henry Ford ever visited our farm.

Grandpa and Uncle Floyd felt they'd done the right thing­—with the problems they'd seen Ford have with the experimental car he'd brought to our farm, they certainly didn't think they should risk the payments for a good Shorthorn bull on that sput­tering machine's future.

Secondly, the earlier generation of our conservative family wasn't about to take a chance on anybody who actually believe these horseless carriages would ever totally replace horses.

Ford never mentioned the possibility of offering stock in his For Motor Co. for the bull during the visit to our farm. But he later asked a friend of our family to think about investing $500 in his proposed auto company.

The friend considered it for awhile, then turned Ford down and was not among the original 11 investors who eventually raised $28,000 among themselves to form the Ford Motor Co. in 1903. 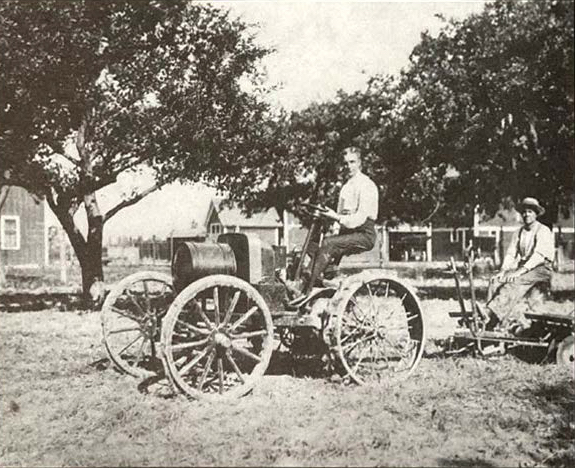 Always a farmer at heart, Ford soon found himself involved extensively in the tractor business. One of his first Ford tractors is shown here tilling the soil on the Ford farm.

By the time Chicago dentist Ernst Pfenning bought Ford's first model L car in July of 1903, the company's capital had dwindled to $223.65. But you and everyone else know how the car quickly proved to be a big hit, and how Ford's company soon grew to become one of this country's leading businesses.

Our family has often wondered what that neighboring farmer's investment of $500 in 1903 would be worth today, but we all agree it would surely have a value of millions of dollars.

At any rate, as Ford became much more successful over the year, the five generations of our family have enjoyed some good laughs about that summer day in 1902, when Henry Ford's check and credit just weren't good enough for the Lessiter family! 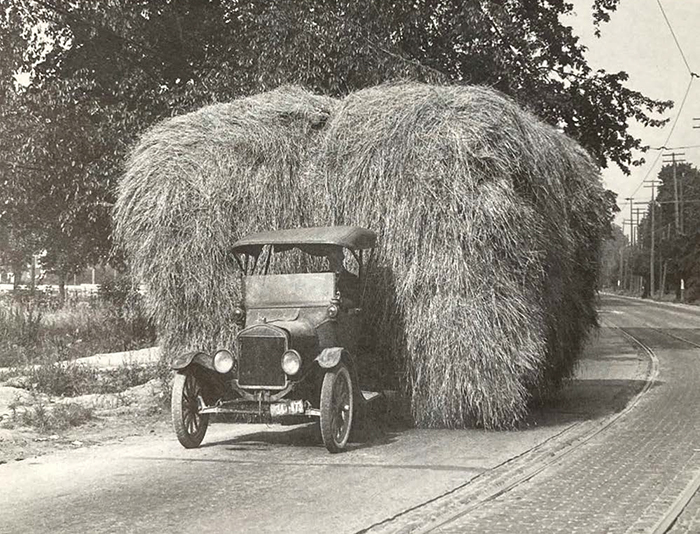 Hauling big loads of hay at the Ford family farm meant relying on the auto company's products for needed power. Note the street car tracks and brick roads in the area around the farm.

The Story of Henry Ford’s Tractor