Excerpt from "Centennial Farm: How Six Generations Farmed the Land"

Having been a teenager at Lohill Farm in the early 1950s, I fondly remember the slick new Ford Jubilee and Farman Super H tractors coming off the deliv­ery trucks.

I don't remember all of the economic details, but 1953 and 1954 must have been extremely good farming years for us be­cause we bought new tractors both years. In 1954, the decision was made to switch to baling hay, and this meant buying the Farmall Super H and a pto-pow­ered International baler.

Both tractors are still going strong today at my sister and brother-in-law's farm west of Lapeer, Michigan. As you might guess, both tractors would bring more dollars today than Dad paid for them 45 years ago!

Besides a couple teams of Bel­gian horses, Dad and Grandpa Frank had farmed with several older Ford and Fordson tractors.

In fact, the Lessiter family's relationship with the company goes back to 1902 when Henry Ford visited the farm to examine a Shorthorn bull as a potential herd sire for his herd. That was a year before the Ford Motor Company was officially formed and four years before ex-farm boy Henry Ford started thinking about producing tractors.

By 1917, Ford was building the Fordson model F tractor in Ireland. It had an 18-horse­power, four-cylinder engine and featured a three-speed, worm-re­duction gear system. In 1918, 6,000 of these tractors were built at a Detroit factory.

When the 1953 Ford Jubilee tractor was introduced to cele­brate the 50th anniversary of the Ford Motor Company, Dad was among the early buyers.

Larger and heavier than the 8N tractor it replaced, the Jubilee had an overhead-valve, four-cyl­inder, 134-cubic-inch engine. Completely restyled, it no longer resembled the popular 8N Ford tractor or the Ferguson T0-30, a major competitor which came out in 1951.

What I remember most about this tractor was the "Golden Ju­bilee Model 1903-1953" nose medallion used to promote the founding of the company in 1903.

This medallion was made only during the 50th anniversary year and there was a revised star-en­circled medallion on the 1954 tractors-about the only change made in that year's production.

A non-live pto was standard on the Jubilee tractor and a live pto was optional. The brakes were improved and a better gov­ernor was built. The muffler was moved from under the engine to under the hood to reduce the chance for a hot muffler causing fires in dry straw. The tractor also featured a Ford-designed, camshaft-driven pump mounted on the engine.

These Jubilee tractors were painted red and gray, an exciting change from the gray Fordson and Ford tractors seen for years. So much for the auto philosophy of Henry Ford Sr., whose credo was, "Any color as long as it's black." 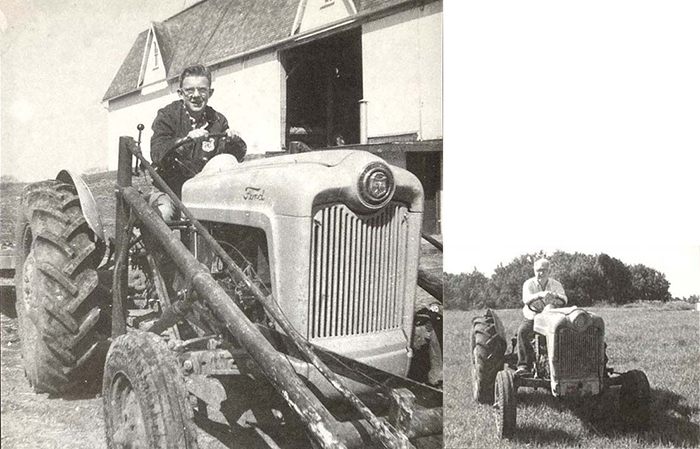 SAME GUY, SAME TRACTOR. As a teenager, Frank Lessiter spent many hours driving this tractor. Both are still going strong 60 plus years later.

It was more than just coincidence that a new Ford tractor made its debut during the 50th anniversary year of the com­pany. To fully understand the sit­uation, you need a little history.

The revolutionary three-point implement control system with automatic compensation for changing draft loads with im­plements was invented by Irish­man Harry Ferguson. He had partnered early with Englishman David Brown to build the Fergu­son-Brown tractor.

When the partnership didn't work out, Ferguson sold Henry Ford on the idea and they quick! y struck a gentleman's agreement to build a new tractor incorporat­ing the Ferguson hydraulics.

The first joint-venture 9N tractor rolled off the assembly line in June of 1939 and more than 10,000 tractors were sold that year. The 9 meant 1939 and N was the Ford designation for the tractor. To hold the price to around $600, parts from Ford car and truck assembly lines were used on the tractors. The tractor proved very popular, but World War II material shortages and rationing meant low tractor in­ventories.

The designation was changed from 9N to 2N (for 1942) to reflect simplified changes and to get around the War Production Board's price controls.

Following the war, Henry Ford Sr. was forced out and his grandson took over the company controls. Faced with nose­bleed-sized losses, the decision was made in 1946 to disband the tractor partnership with Harry Ferguson. The younger Ford soon figured out Ferguson was the only one making any money in the deal.

Ford had built tractors at a fixed price for Ferguson, who then sold tractors and equipment to farmers through his Ferguson dealers, one of which was lo­cated in Pontiac, Michigan.

As a young kid, I remember sitting with Dad in the Ferguson tractor dealership--actually the garage behind the dealer's house in downtown Pontiac.

The Ford goal was to build a completely new tractor to go head-on with whatever tractors Ferguson could piece together. By 1948, Ford offered a line of implements under the Dearborn Motors Company name.

I remember seeing farm mag­azine ads for Dearborn Motors farm machinery. Since the city of Dearborn was the home of Ford Motor Company, it wasn't hard to figure out this tie-in with the new farm machinery arm of the Ford organization.

By then, Ferguson had devel­oped the Ferguson TE-20 for Eu­rope and soon followed with a plant in Detroit to build the T0-20 American version.

In late 1946, Harry Ferguson sued Ford for $251 million. Because Ford would no longer pro­vide tractors, he felt he earned these dollars for loss of business and patent infringement.

Hydraulics Were The Key

Yet the real bone of conten­tion was the hydraulically con­trolled three-point system, the only point on which Ferguson eventually won in court. This led to a court settlement of $9.25 million, much less than what Ford paid lawyers on the case.

Most importantly, Ford was required to come up with a new hydraulic system by 1953. This led to the decision to have Ford engineers design a better hy­draulic system and to launch the new Jubilee tractor in 1953.

Even as a teenager, I could tell that the tractor featured a pretty darned close copy of the Fergu­son three-point hydraulic sys­tem. But it somehow withstood later court deliberations.

When we switched to baling hay in 1954, the Farmall Super H tractor was needed for pto horsepower. Plus the pto shaft of the Ford Jubilee tractor simply wasn't high enough off the ground to handle the baler's power needs.

With higher engine displace­ment and more power than pre­vious H model tractors, the Super H wasn't manufactured for very long by International Harvester. It was introduced in 1952 and production was halted in 1954.

These H series tractors were advertised by International Har­vester as a "two-plow tractor in any field." They were probably International 's best-selling full­-size tractor with more than 350,000 sold from 1939 to 1954.

The H tractor was a 1939 re­placement for the much-loved International F-20 tractor. In 1940, you could buy a model H tractor for $962 with rubber on all four wheels. This cost $172.50 more than tractors that came with four steel wheels ­something many farmers had to settle for during the early 1940s when rubber was in short supply during World War II.

By 1954, the "letter line" was discontinued and replaced by the "hundred" series of. bright red tractors. Yet there's much more to International's role in the trac­tor field at that time than just changing the way tractor models were named.

In hindsight, unfortunate busi­ness moves by International in the mid-l 950s probably brought an end to the company's domi­nance of the U.S. tractor market.

Branching out into construc­tion equipment, home appli­ances and other products meant the company was short of much needed investment and manu­facturing funds.

This soon led to the company falling behind the U.S. market in the. one area which made the company great-production of those bright red tractors.

The Story of Henry Ford’s Tractor

When Henry Ford Didn’t Have the Bucks