HR: The Employee’s Advocate During Growth-Mode

Every organization needs to attract, motivate and retain the most qualified employees and match them to jobs for which they are best suited. Human Resources is pivotal in making that happen. But unlike the past when HR was mostly relegated to the administrative function of an organization — handling employee benefits questions or recruiting, interviewing and hiring new staff — at Precision Equipment, HR is moving from a “behind-the-scenes” staff to a thought leader in suggesting, changing and implementing company policies.

Human Resources Manager Angela Huthmacher certainly values the importance of the administrative and compliance duties, but recognizes, “Dealerships are learning you need to have HR doing employee engagement things as they get bigger. And as they get bigger and more robust, realize that HR is a vital part of moving them forward.”

Prior to her arrival in 2010, Elder Implement had someone handling the administrative tasks, but had the foresight to see they needed a full-time HR manager to help it grow. That’s where Huthmacher stepped in. She had worked previously with General Manager Randy Amosson and welcomed the opportunity to again be part of his team.

Huthmacher had experience in HR, but points to her time working in IT as laying the foundation for her current role. “It taught me a lot of things about customer service, which is really what HR is all about. Internal and external customer service is what you’re doing every day, all day long. It may not seem like they’re very similar, but they really are.”

In her estimation, HR is much more than “we have a new hire, let’s put them into the system.” It’s about encouraging employees to recognize they are each other’s customers and the importance of relationships. 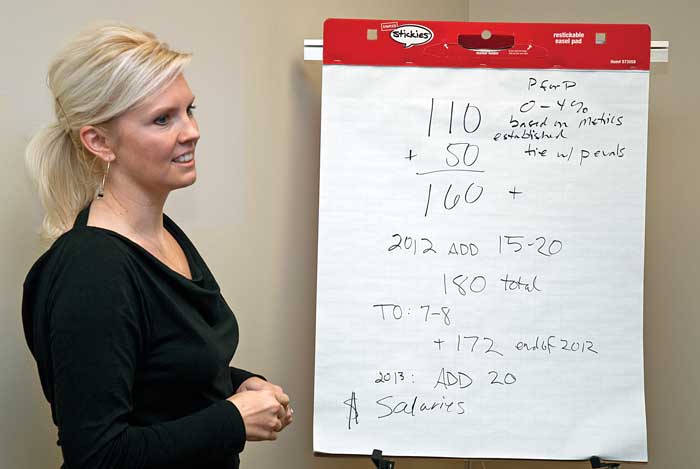 Role: “I call myself ‘Switzerland.’ We’re here to provide a resource to both employees and management in order to meet in the middle and help facilitate whatever we need to do.”

The task of fostering communication and developing an identifiable company culture became a bit more challenging when three more stores were added with the November 2011 merger, bringing the total to eight. But Huthmacher believes patience and effective communication will make it possible. “It’s still a learning process for all of us to figure out what kind of culture we’re merging into. We need to be patient; it’s not going to happen overnight.”

In the months leading up to the union of the dealerships, Huthmacher estimates that nearly 90% of her time was taken up with issues related to the pending merger. As with any move of this nature, there was plenty of water-cooler talk and misinformation floating about, so it was critical to impart Chairman Ron Farrier’s message of “growing, not going” to help employees see they were becoming part of something bigger. There would be, of course, some period of change, but it was important that employees not feel overwhelmed by the thought of the merger.

The idea of gathering all employees together at a single location to announce the merger was considered. Thinking that may be a bit overwhelming and not as personal, the newly formed leadership team opted to work with a marketing company to develop a video that would be rolled out at simultaneous meetings. As Huthmacher explains, “We did one with the owners who told the history of how we got to where we’re at. Then I did an employee video that explained to everyone you’re not really going to notice much change, but we’re excited about moving forward.”

When it came to employee benefits, an effort was made to make as little immediate impact as possible on all employees. In that respect, the merger has gone smoothly. Long-term, Huthmacher hopes to see more co-mingling of not just the locations of the new company, but also of the specific departments, too. “Things are probably being done the way they’ve always been done, but employees can help each other,” she says. “We need to continue to merge people together, and HR is going to be the big thing behind making that happen.”

While the merger was the focal point during the months prior to the announcement, Huthmacher needed to keep her eye on the day-to-day tasks of HR. Hiring is an example and it’s a process she streamlined shortly after joining the team.

“We were still taking paper applications. People would walk into one of the locations and want to fill out an application,” she recalls. “When I looked at the stack of applications, I knew right away what my first task would be!”

The firm now utilizes the same online application as John Deere that integrates with their payroll system and makes for considerably more efficient processes.

“A candidate can now input their resume online, and it comes right into our database.” From there, she’s able to set up appointments, interviews and basically track a candidate from hire to retire all the way through the system.

Asked how they face the challenge of finding and hiring good service technicians, Huthmacher indicated that they haven’t had to do too much recruiting thanks to a lot of word-of-mouth from current employees.

The dealership continues to maintain a relationship with a local community college and also participates in the JD Power program which sponsors a student preparing to become a technician. Students need to maintain a certain grade point level and Precision Equipment will cover their tuition in exchange for a commitment to work for them after graduating.

With regard to employee retention, Huthmacher supervises a Training Coordinator who meets with new employees to assess their background, skill set and ambitions. This helps identify a potential career path and plan how a service tech, for example, might grow to service manager. It’s essential to employees with ambition to see how their current position can lead them to where they want to go.

“I encourage the leadership team to remember where it starts. To remember the people behind the scenes who are coming in every day and investing so much in their work. Our leadership team does a good job of appreciating that, but it’s up to me to be there to remind them about the human capital part of things…” – Angela Huthmacher, Human Resources Manager

Community involvement is certain to be an integral piece of the developing culture. “It’s key to support the local communities because that’s where our stores are,” Huthmacher said. “We’re not nearly where we want to be as far as community involvement, and HR will have to take on a bigger role in that.”

Another initiative Huthmacher would like to implement is a pay-for-performance plan. As she puts it, “Right now, people are not getting compensated or rewarded on a consistent basis.” There’s a performance review program in place, but it isn’t tied to compensation. It basically falls to the employee to say, “I would like a raise. Can I have one please?”

It creates a “squeaky wheel getting the grease” scenario that’s not performance or incentive driven. Huthmacher believes that establishing clear guidelines is critical to employee retention and will introduce metrics so employees recognize that if they achieve at a certain level, their compensation will be adjusted accordingly.

Going forward, Huthmacher has her sights set on increasing HR’s visibility within the organization and its voice in the direction of the company. She’ll look to accomplish the first by introducing an internal newsletter to communicate to every corner of this growing enterprise that they’re not off by themselves, but are part of something bigger and better.

For the big picture, Huthmacher envisions making HR a more integral part of the long-term planning by working closely with the leadership team. “We’re talking about annual goals and initiatives, and I have a couple things I would like to focus on,” she shared. “The planning that will need to take place to get there is considerable, and it’s important that HR be part of the team that sets the goals.”

She sees HR as that resource or “middle-ground” where employees and management meet to help facilitate what needs to be done and a key ingredient for the projects and plans to be achieved in the coming year.

In her tenure, she believes her main accomplishment may come in the form of advocacy for the employees.

“I encourage the leadership team to remember where it starts. To remember the people behind the scenes who are coming in every day and investing so much in their work. Our leadership team does a good job of appreciating that, but it’s up to me to be there to remind them about the human capital part of things.”

Michael Ellis is publisher of Rural Lifestyle Dealer and takes an active role on all the titles in Lessiter Media’s Ag Division. He brings nearly 20 years of publishing experience across diverse markets both in business-to-business and consumer focus, with the last 10 on trade media for agriculture and landscape industries. A graduate of the University of Wisconsin-Milwaukee, Michael joined the Lessiter team in 2008. Contact: mellis@lessitermedia.com

'Personally' Tackling the HR Challenges of a Growing Dealership

Acquisition Growth Can be Done Without Seeking Additional Capital