Agri-Service, an AGCO dealership group with 13 stores in Idaho, Washington and Utah, held a grand opening for its new store in Fruitland, Idaho. The expansions in both Fruitland and Marsing — the location of a new parts warehousing facility — are the result of evolving agriculture epicenters for Agri-Service, which prompted the closure of facilities in Nyssa, Ore., and Caldwell, Idaho.

Painter says the two locations that were closed were too close together and were also becoming more residential areas instead of large ag. “Location was definitely an issue because we were surrounded by industrial and residential instead of being in the farmland where we needed to be,” he says.

The new store provides a much larger shop (10,000 square feet). Painter says it also has much better tooling and has enabled Agri-Service to better serve customers as the size of equipment continues to get larger. “This new facility now has state-of-the-art tooling, a much bigger shop, overhead cranes, the things that we really needed,” he says. Plus it’s all under one roof. At the old Nyssa location, Painter says the shop was getting old and outdated and was small so the technicians often had to do a lot of work outside.

“Now, we can have double the number of mechanics working under one roof and a big thing with us right now is teamwork. And, by bringing all the mechanics together, it’s been pretty amazing, what we’ve seen just with teamwork and people working together, being under one roof,” he says. 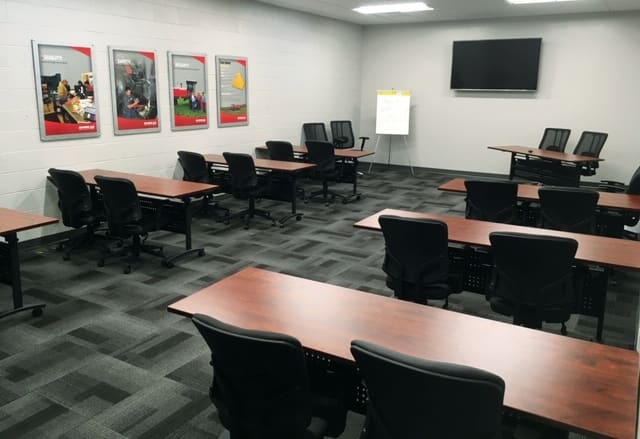 The Fruitland location includes a training room that is twice the size of any other training room in Agri-Service’s western region. It will be used for training across the region, says Jamen Painter, store manager.

In total, the Fruitland location is 30,000 square feet. Previously, the dealership didn’t have nearly enough office space, with some salespeople having to share desks. “Now, everybody has their own office, their own desk, their own base or home, which has been huge,” Painter says.

The Fruitland store also features a state-of-the-art training room, which is double the size of any other training rooms Agri-Service has in its western region. “Now, we can hold local trainings in this region and not be worried about cramming people in a small room,” he says. 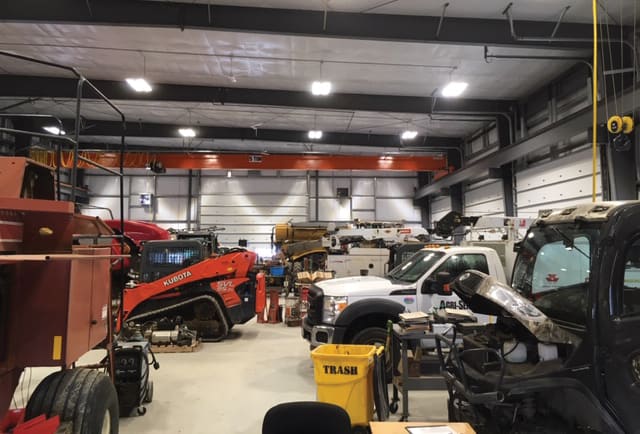 The new service shop is 10,000 square feet and features overhead cranes and has state-of-the-art tooling. The old Nyssa, Ore., location’s shop was so small that techs often had to work on equipment outside.

Agri-Service also drastically increased its parts stocking with a stackable racking system by E-Z-Rect Parts Shelving. “Our ability to house and keep our parts under cover now has doubled. Which, in the ag industry is so important. Probably the No. 1 complaint from farmers to dealers is they didn’t have any parts. Well, we don’t want that, so we doubled our parts inventory in both locations — Fruitland and Marsing — and our parts have drastically increased.”

The showroom has very high ceilings and there are stairways behind the parts counters leading to a second level of parts storage. The dealership also added additional containers for storage outside. Previously, they had one 40 foot container and now there are three, Painter says. 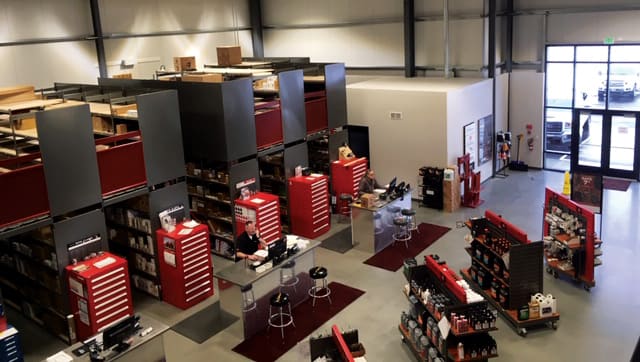 Agri-Service’s Fruitland, Idaho, store has E-Z-Rect Parts Shelving, a stackable racking system. The high ceilings in the showroom and parts department allow for a second level of parts storage.

See how these dealers updated their facilities below