Earlier this month, Ag Equipment Intelligence released an entirely new quarterly report to its subscribers that was developed to be used as a baseline for company valuations and to track mergers and acquisitions (M&A) activity levels in the farm equipment industry.

The editors of Ag Equipment Intelligence, in collaboration with Eric Bosveld from SDR Ventures (a U.S.-based mergers and acquisitions advisory firm), released the inaugural report, Agricultural Equipment Markets, on Aug. 23. It covers transactions that took place during the second quarter of 2018 and includes a trailing 12 month listing of M&A transactions along with historical trends starting with January 2012. 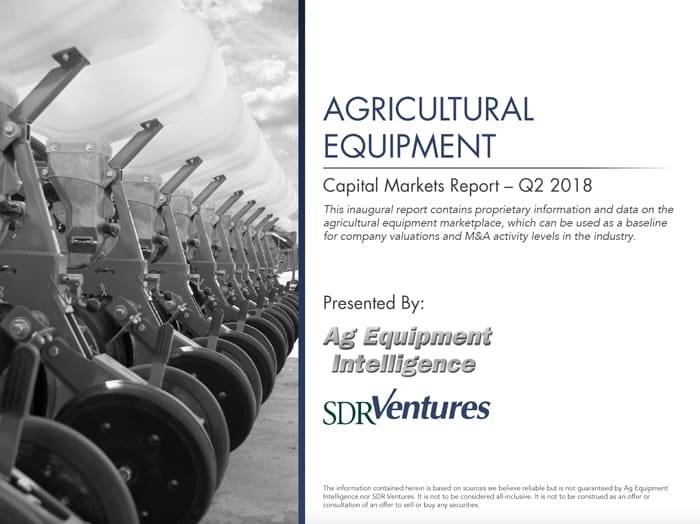 For private business owners, the valuation multiples of comparable publicly traded companies can provide a relevant valuation metric. However, since public companies are inherently more liquid than private companies because investors can easily trade public company shares, a Discount for Lack of Marketability (DLOM) is applied to private transactions. Typically, throughout business and industry, this discount ranges between 30-50%. For the purposes of this report, a 30% discount is applied to these multiples.

Since Jan. 1, 2013, average transaction EBITDA multiples of public and private company deals in the ag equipment industry have been 9.8x EBITDA (earnings before interest, tax, depreciation and amortization) and 1.2x revenue. The median EBITDA multiple was slightly lower at 8.0x EBITDA. The average total enterprise value (EV), which includes debt, was $632.9 million, with an average disclosed revenue of $326.6 million.

“We tracked 10 ag equipment transactions during the second quarter of 2018, 27 since the start of 2018 and 54 over the last 4 quarters,” says Bosveld, director of Food & Agribusiness for SDR Ventures, and author of the report.

Overall, 10 ag equipment transactions were tracked during the second quarter of 2018, 27 since the start of 2018 and 54 over the last 4 quarters.

One transaction that took place in the second quarter was Turbo Mist sprayer manufacturer Slimline Manufacturing, which was acquired by publicly traded Decisive Dividends during the quarter for CAD (Canadian) $7 million, plus a potential earn-out of an additional CAD $1.5 million. The deal was financed with CAD $6 million in debt including a CAD $1 million vendor take-back, plus CAD $1 million in Decisive shares.

This constitutes a pre-earn-out multiple of 3.9x EBITDA and potential 4.7x EBITDA multiple should the full earn-out be paid. According to Decisive’s website, it invests in established manufacturing companies with strong predictable cashflow to provide its shareholders with stable and growing monthly dividends.

No other deals tracked during the second quarter of 2018 disclosed any financial details.

Average agricultural equipment market valuations dropped by 1.1x EBITDA during the second quarter of 2018, from an average of 10.1x EBITDA to 9.0x EBITDA, when expressed on an adjusted DLOM basis. Median multiples also dropped but not to the same extent. This extends the valuation decline for the group since the beginning of the year.

Trimble, Raven, Lindsay and Titan International stand out in our comparison with much higher than average valuation multiples, while AGCO and CNH lagged much of the rest of the industry.

The decline in the market valuations of the publicly traded ag equipment companies during second quarter 2018 was largely during the month of May. However, the drop in value was not as steep as the S&P Agribusiness index during the same period.

While sector and individual company analysts can undoubtedly provide detailed explanations for many of the individual securities, we believe the declining market conditions were largely driven by:

The increased cost of steel and aluminum for both U.S. and Canadian manufacturers with newly imposed tariffs;

The deteriorating conditions of the overall agricultural market and end-customers’ lack of ability to buy or upgrade equipment.