While steel tariffs are currently grabbing most ag headlines these days, possible changes to the Renewable Fuel Standard (RFS) may produce longer term chal­lenges for U.S. agriculture. Battle lines between oil refiners and ethanol pro­ducers and their suppliers (corn grow­ers) have been clearly drawn.

In large part, ethanol has literally fueled much of the growth U.S. agricul­ture has experienced in the past dozen years because corn is the principal feed­stock in producing the fuel additive. Since the use of ethanol (or biofuels) was mandated in 2005, U.S. corn pro­duction has grown from about 10 billion bushels a year to slightly over 15 bil­lion bushels by 2016, or by about one-third. During this time, ethanol has made up about 10% of the total gasoline fuel consumption. In other words, ethanol production has been very, very good for agriculture and neither corn growers nor ethanol producers want to cede any of that growth.

Overall, of the 14.3 million bushels of corn used in 2017, 30% went into production of fuel ethanol and another nearly 9% was used for DDGS, or dried distillers grain with soluble, a co-prod­uct of ethanol production used as feed rations for livestock and poultry.

Oil refiners, on the other hand, do not want to cede any more of their market to ethanol. But they have framed the current battle around the cost of RINs (Renewable Identification Numbers) and are pushing to cap its price. 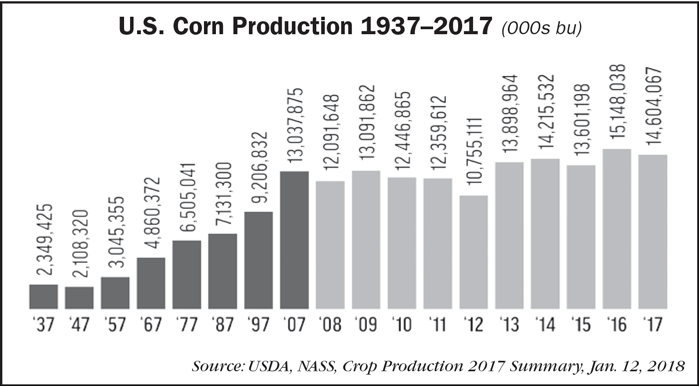 RINs are serial num­bers used to track production, use and trading of biofuels as enacted by the Energy Policy Act of 2005 through the Energy Independence and Security Act in 2007. Every batch of biofuel pro­duced has its own unique RIN. The laws require transportation fuels sold in the U.S. to contain minimum volumes of renewable fuels. RFS is administered by the U.S. Environmental Protection Agency, and the RIN system allows EPA to monitor compliance with RFS.

In effect, the law requires fuel refin­ers, blenders and importers to blend a specified volume of renewable fuels based on a percentage of the compa­ny’s total fuel sales. Oil companies cre­ate RINs (38 character codes), register them with EPA and submit them on an annual basis to demonstrate they have met their RFS quota.

According to a study published by the Center for Agricultural and Rural Development (CARD) at Iowa State University earlier this month, every gal­lon of biofuel produced in or imported into the U.S. generates a RIN. The RIN is detached from a gallon of biofuel when it is blended into the U.S. fuel supply at wholesale terminals. Refiners comply with the RFS either by blending biofuels and selling them to domestic wholesale markets, thereby generating RINs in-house or by purchasing separated RINs from other parties.

The U.S. Department of Energy explains that those that fulfill their annual RFS requirements and continue to buy and blend renewable fuels can amass excess RINs. They are allowed to sell the excess to others who have not met their annual obligations. RIN prices are determined by market factors typical of other commodities.

In other words, refiners who produce more fuel but do not blend it to RFS requirements, must purchase RINs. As the demand for RINs rises, so do their prices. According to published reports, the price of credits rose from just a few cents in 2012 to more than $1 at times in 2013 and 2016. Prices for renewable fuel (D6) credits for 2018 were at 39 cents as of March 13, which is down about 40% since the beginning of the month. 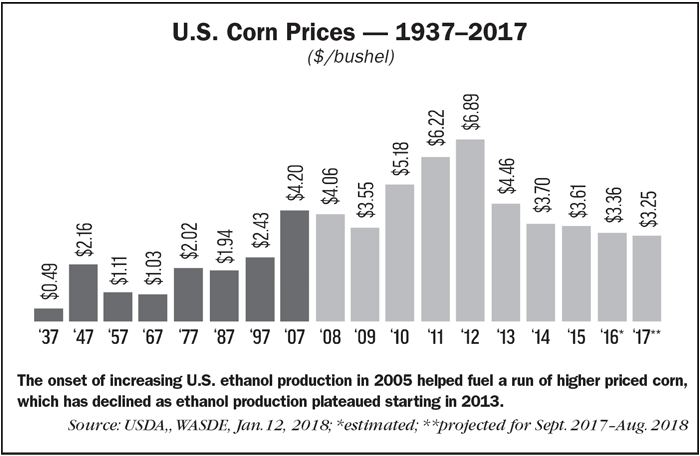 The Iowa State CARD study examines a Renewable Fuel Standard reform proposal current­ly being considered by policymakers that would allow E15 (fuel containing 15% ethanol) sales throughout the year and implement a cap on D6 RIN prices between $0.10-$0.20/RIN. (D6 is one type of RIN.)

The study goes on to says that, while year-round sales of E15 would encour­age retailers to sell the fuel, capping D6 RIN prices would reduce consump­tion of E15 and E85. “A cap on D6 RIN prices between $0.10/gal to $0.20/gal would likely reduce the effective ethanol mandate from 15 billion gallons to about 14.3 billion gallons in 2018. Unless increased ethanol exports com­pensate for the reduced mandate, corn prices would decrease under the pro­posal’s D6 RIN price cap.” It estimates that such a cap could cost farmers as much as 25 cents per bushel.

That’s the rub for corn farmers. And, of course, as has been demonstrated for the past 3 years, low commodity prices result in lower farm equipment sales.

The National Corn Growers Assn. has led the charge on behalf of farmers in insisting that the current administration in Washington D.C. not tinker with the RFS. In an open letter to President Trump on March 9, NCGA president and North Dakota farmer, Kevin Skunes, said that changes to RFS would trigger significant losses in farm income and rural jobs. He also made it clear that NCGA is opposed to the oil industry proposal that would cap the price of RINs.

Skunes said: “Corn farmers have fought hard the past 10 years, within Congress, with the last Administration, and in the courts to protect the oppor­tunity for renewable fuels to continue to grow as an option for consumers. The President is considering a proposal from the oil industry that could cut farm income almost $4 billion dollars per year for the next two years. It is a deal that American farmers cannot afford. My message to the Secretary [Perdue] was to ask the President not to cap future growth and opportunity in rural America by implementing a bad policy that would only serve to bailout a small handful of oil refiners.”

According to NCGA, there is a win-win for farmers, ethanol producers and the oil industry. This would require adjusting current regulations to allow year-round use of fuel blends above 10% ethanol. “Unfortunately, the oil industry continues to insist those changes are not enough,” said Skunes, “but we will con­tinue to oppose any deal that includes a RIN cap or waiver credits.”

One of the fac­tors that provided the oil industry with ammunition to pressure EPA to change RFS regulations regard­ing RINs was the bankruptcy of the Philadelphia Energy Solutions refinery. PES says the high cost of RINs contrib­uted to its financial problems.

In its settlement with PES, on March 14, EPA conceded that the bankrupt refiner would only need to satisfy about one-half of its $350 million in outstand­ing compliance obligations under the RFS. According to a Reuters report, EPA has signaled its willingness to exempt more small refineries, which would limit potential buys for the credits. The company entered bankruptcy owing 467 million credits from the past 2 years, with only 120 million RIN credits in its possession.

Ethanol groups reportedly “troubled at the precedent this sets.” The RFS battle rages on.