From the provocative to the practical, the world's largest agricultural machinery trade show offered a peek at upcoming innovations.

Touting a theme of “Green Future – Smart Technology,” Agritechnica 2017 in Hannover, Germany, featured both progressive and pragmatic innovations. Precision technology was again a focal point with nearly 700 of the 2,800 exhibitors showcasing the latest hardware, software and other mechanical components.

Farm Equipment identified these three technology trends to watch for from Agritechnica 2017. 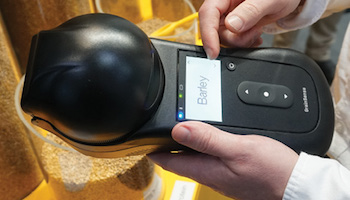 The system, which will begin commercial production in January 2018 and initially retail for about $4,500, takes readings from a small sample size (about 80 kernels) ahead of harvest and delivers results in about 30 seconds on the device and also to a connected mobile app. It is initially calibrated to analyze wheat, barley, oats and rye, with additional seed varieties to be added in the future, including corn.

“The system will automatically update when new calibrations are added, so farmers won’t have to invest in additional software,” says GrainSense co-founder Ykä Marjanen. “Farmers don’t want to wait 3 days for results from a lab, and this tool will allow them to make same-day decisions in the field ahead of harvest.” 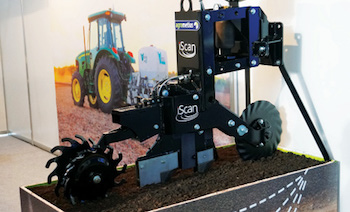 Tyler Lund, sales and marketing manager for Veris, says the tool allows farmers to identify patterns in fields where areas may get consistently drowned out and also digitize real-time soil readings up to 2-feet deep to plan variable-rate planting prescriptions and in-season nitrogen (N) applications.

Speed and accuracy are essential elements of planting and companies unveiled new innovations to improve on both. Väderstad introduced its new Tempo L high-speed planter, available in 18-row, 20-inch spacings and 16-row, 30-inch spacings staring in 2018. 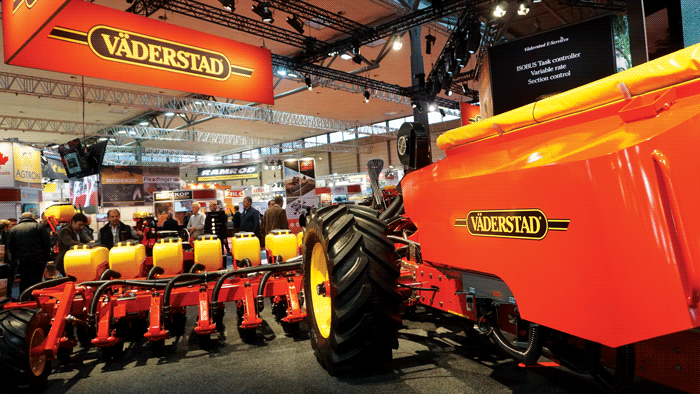 Updates to the new model include an optional dry fertilizer bin and 3-bushel seed hoppers capable of planting corn populations of up to 34,000 seeds per acre and 124 acres per fill up for a 16-row machine. Also new is a small seed kit with altered press wheels and closing wheels that travel in the seed trench and more closely follow the contours of shallow-planted seeds.

The planter set a world record, planting 1,300 acres of corn in 24 hours at an average speed of 15 mph, with 98.5% accuracy. Larry Wieler, managing director for Väderstad sales in North America, acknowledges that farmers aren’t expected to plant at speeds that fast — especially in no-till conditions.

“Farmers will base their planting speed on field conditions, but if they are facing a tight planting window, they can be confident about pushing speeds if they need to,” Wieler says. “There is a radar system connected to our electric seed metering system, which can adjust instantly to varying speeds and field conditions. The power shoot seed delivery system also takes gravity out of the planting equation, so even on side hills, seed bounce is eliminated for consistent seed-to-soil contact.”

AGCO Fendt debuted its Xaver autonomous seeding unit, which earned a silver medal for innovation at this year’s show. The compact, programmable robot is designed to work in sync with multiple units in the field, creating a “swarm” of autonomous planters. 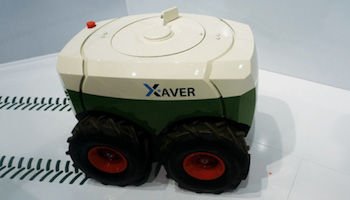 PRECISION TRENDS. One of the more popular debuts at Agritechnica 2017 in Hannover, Germany, was Fendt’s Xaver autonomous seeding unit. Programming a “swarm” of 12-15 of the robotic machines is to the performance of one standard 8-row corn planter.

According to Johannes Lehmann with Fendt, 12-15 units are comparable to the performance of one standard 8-row corn planter and 10 Xaver units can plant about 2.5 acres per hour. The units are automated to refill and recharge batteries, which takes about a half-hour.

“There is a background app that calculates different variables, including field size and other machines running the field to avoid overlaps and overplanting,” Lehmann says.

The prototype units are being field tested in 2018 with scheduled commercial production in 2020.

Following are additional new products introduced during Agritechnica. You can also find video interviews from the show by clicking here.