Understanding Customers, Keeping Ahead of the Curve Vital for Redhead Equipment

The dealership’s successful partnership with shortlines across the agricultural, construction and trucking industries reflect a wide range of benefits, from customer loyalty to service quality.

An overhead view of Redhead Equipment’s Saskatoon dealership, one of their 7 locations across Saskatchewan.

Redhead Equipment has always taken pride in keeping up with the industry’s latest. Well aware of its progressive-minded customer base, missing out on what could be the next breakthrough is simply not an option for the 7-store dealership.

While primarily a Case IH retailer, Redhead Equipment has never been shy about testing the waters with shortlines. In the dealership’s farm equipment division alone, an abundance of manufacturers are available, including Seed Hawk, Bourgault, Kubota, Degelman, Honey Bee, MacDon and more (see Dealer Info Box below). Complementing the agricultural selection is a wide range of options in the dealership’s construction and trucking divisions as well.

Perhaps no addition has made a bigger impact on innovative technology for the dealership than its partnership with Seed Hawk, a shortline specializing in seedling, planting and tillage systems.

Jarrod Pugh, agricultural sales manager at Redhead Equipment’s Saskatoon, Sask., location, says it was Seed Hawk’s precision drill that first caught the attention of the dealership. Featuring an independent opener concept allowing for unprecedented precision in seed placement, the design had industry-shifting potential in Western Canada, which has always been a seeder-oriented region.

“Sectional control was a big opportunity because it offered something that the industry didn’t currently have,” Pugh says. “The conventional air drill with a seed shank didn’t have the accuracy in seed placement like the current Seed Hawk offers. It was the first of its kind and really is the benchmark for every drill manufacturer today.”

The Success in Shortline Machinery series highlights the best practice strategies employed by top farm equipment dealers to promote and sell shortline equipment. It is brought to you courtesy of Väderstad.

Väderstad, is a family-owned full-line manufacturer of high-speed planters, seed drills and tillage equipment. Together with farmers in 40 countries all over the world, we have spent the last 55 years creating machines that make any farmland find its full potential. Väderstad is seeking independent-minded dealers capable of selling and servicing high quality equipment to professional farmers. If you are looking for the possibility to expand your customer base, contact Larry Wieler at larry.wieler@vaderstad.com or (289) 527-4697.

Keeping Up with Customers

The improvements in yield, germination quality and overall planting value brought by Seed Hawk’s innovations were not lost on Redhead Equipment’s customer base, whose consistent and lofty expectations keep Pugh and the rest of the staff on their toes. While many are appreciative of the dealership’s initiative in keeping up with the industry’s best, Pugh understands that loyalty is never guaranteed. Having the best shortlines and overall equipment is one thing, but convincing customers of such is an entirely different story.

“It’s always a tough sell, and in my opinion, Seed Hawk is the number one drill on the market,” Pugh says. “But there’s very good competition and more than one product offering for farmers. They need to be sold on the reasons for why it makes sense for their farm and how it can create better value for them.”

Part of convincing customers on specialty equipment lines is proving an understanding of the region’s general market, which can even include drawing a strict line within a manufacturer’s products. As successful as Seed Hawk’s seeder has been for the dealership, Pugh says Redhead Equipment doesn’t invest in Seed Hawk’s planting equipment. It’s not a quality issue, but one of relevance he says.

“Corn and soybean planting is less specific to our crop rotation,” Pugh says. “The crops we grow in Western Canada are ideally suited for the air drill, which is why all the main competitors in the industry were developed here.” 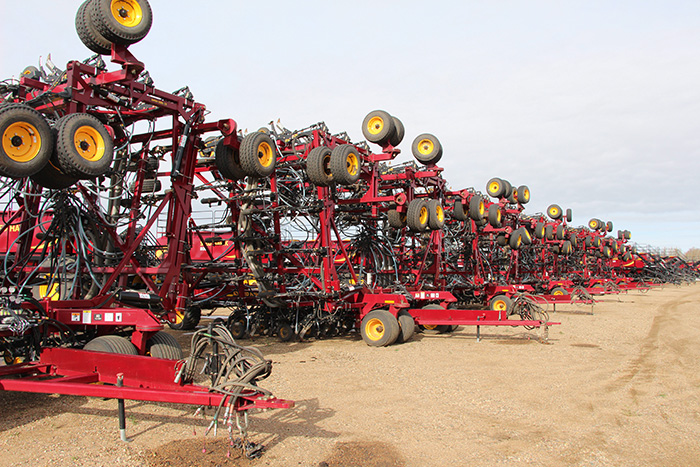 Sectional control was unprecedented in the seeding industry across Western Canada, a feature of the Seed Hawk drill that immediately caught the attention of Redhead Equipment.

Along with relevance to industry and dealership, Pugh says the other major factors considered when adding a shortline include quality of product, and perhaps most importantly, the overall reputation of the company being considered. Just because a company is profitable and sells great equipment doesn’t always make it a perfect match, and the concept of a well functioning, long-term partnership is crucial for both Redhead Equipment and the manufacturer.

Reasons for why a quality manufacturer may not make a quality partnership can include the aforementioned lack of relevance in equipment to the region, and also a failure to act in the best interests of a perceived partnership, which Pugh cites as a red flag and potential deal-breaker.

“What’s critical is ensuring everyone’s best interests are aligned – ours, the manufacturers and our customers,” Pugh says. “If those requirements aren’t met, then the partnership has likely run its course. We’ve certainly had shortlines we no longer carry because of this.”

Specifically, Pugh notes the concept of exclusive deals between a shortline and dealership within a specific region as a key driver in a successful long-term partnership. Otherwise, conflicts over loyalty and overall benefit to both sides can arise. Pugh notes this is hardly an issue in their region, as manufacturers have a strong track record with dealership commitment.

“Having more than one dealer in a trade area doesn’t do the manufacturer any good,” Pugh says. “It just becomes a wholesale giveaway. It certainly doesn’t do the brand any good, and it ties the hands of the dealers as they try and build a profitable and reputable brand.”

Training for the Future

Redhead Equipment has continued to expand its footprint in Saskatchewan, adding 2 additional locations in Prince Albert and Melfort as recently as 2014. With the increased staff brings not only an expansion to their training program, but also an elevated expectation in product knowledge, a factor Pugh contributes to shortline success.

Among the many benefits to a successful long-term shortline partnership are unique advantages in training. By having a deep understanding of the different product lines’ history and development over the years, Redhead Equipment can train its employees on the functionality of the product as if they were the manufacturer themselves.

Priding itself on being a service-focused dealership, Pugh believes the personal partnerships Redhead Equipment has built go a long way when introducing products to customers at their fields.

“We have the best sales and service staff, and being able to orientate the drills and keep them going throughout the season is essential so our customers can get them into the ground in a timely manner,” Pugh says. “This is high-level technology and high demand stuff. We need to be able to show and train our customers how to use it.”