The precision manager of this 5-store dealership fired himself, reassigned the specialists to other departments and took away the safety net.

In an engaging session of the Summit, Matt Eldridge, director of aftermarket sales, Smith Implements, Greenfield, Ind., shared how their 5-store dealer group turned course and loaded up all its “precision chips” into traditional departments.

Just a few years, ago, the dealer group had 4 specialists (including himself) across its 5 ag sites. “Precision ag specialists had the responsibility of quoting the product, configuring it, selling it, collecting it, installing it and supporting it,” he recalls. “We were doing it all, but we were doing too much. While we did a good job with customers, we still weren’t getting it all done and couldn’t keep up.”

The recognition of several “failure areas,” led Smith Implements to “do away” with dedicated precision specialists and instead refocus those responsibilities to 3 core profit centers (sales, parts and service).

The factors that led to the change included:

So, Smith made significant changes to its organization to stop drinking from the fire hose, get their arms around the support they could manage and work “on” the departments more so than “in it.” That included “taking the legs off of the stool” that forced accountability and kept everyone “glued together.”

Eldridge says the first thing he had to do was “fire himself.” He would stay on as the sole Integrated Solutions (IS) person in a strategy role but would reassign the other 3 specialists. One went to ag sales (“That was a home run — he had the relationships and credibility”), another went into marketing/advertising to market the precision packages, and another into training, both internally and externally. “All these people together helped to support this transition,” he says.

The big change was with the salespeople. Eldridge says sales was told, “If you want to earn a commission on the product, you need to step up and address the gap in knowledge that exists between what the specialists knew and the rest of the organization did not.” They were told they would need to be part of 3 in-house training sessions in addition to manufacturer training, and pass a pre-test of 20 basic questions.

“If they didn’t pass, they couldn’t play the game,” he says. “They had to get on board and get the training and get up to speed.”

The big change in responsibilities was that sales would now be taking that first call — those 30-40 calls a day that previously were landing on an overwhelmed specialist. “We didn’t expect them to be experts, but it was the simple ‘button-pushing’ stuff that we all get. We measure our calls and 80-90% are ‘How do I turn this on? or ‘How do I set that A-B line?’ Sales was now going to fields those calls.

“If they couldn’t fix it for the customer, then it gets turned over to the service department and we open a work order. And if we send the truck out, it was a billable event.”

In addition to 12 salespeople who could now assist on precision, another 20 emerged through the parts departments, who also went through the same testing and precision knowledge preparation. “We saw that parts personnel sourced things accurately and do it well. So, they started managing the precision wholegoods like displays and receivers. We didn’t lose track of things, and the shrinkage went away.” 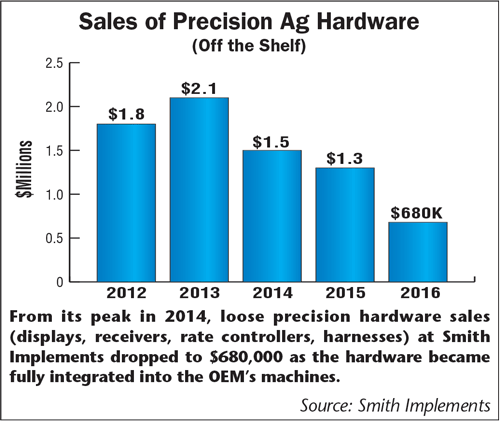 Service was the area that delighted Eldridge the most. “My only requirement going in was that we had to have a minimum of 2 precision ag techs per store.” So, he was excited to get 14 volunteers, mostly from the young staff stepping up to contribute.

“This was an opportunity for them to come in. They love the technology and wanted to be a part of this, and it leveled the playing field for our techs among the veterans. Now those service employees install the precision, do the field start-ups, diagnose and repair, and maintain the 13 base stations when there’s a problem.”

Non-Negotiables to Make it Work

Eldridge says without top-down insistence, a bold move like this would fail. “If your owners, CEO and managers don’t believe in it, don’t do it. You’ve also got to be willing to let some people walk. But the bottom line is that this exposes the gap and we found out what peoples’ commitment level was, and that’s OK.”

The change required a big commitment to in-house training. The trainer began focusing on education for the first time (all employees now go through 3 clinics per year before customers come in) and involved himself in customer events. In fact, the quality of those customer clinics increased to where the dealership now charges for some training. “This training focus brought the knowledge level up across the board so the entire organization knew what was going on and how to keep track of it,” he says.

Another big change was the work order. “If the salesman couldn’t answer the question, they know it goes right to the shop and a work order gets opened, so it keeps it moving.” He also says that the firm is now packaging everything it can, and has parts, service and salespeople all sitting down with key customers for discussions about their pressures, problems and plans that result in informed decisions on how to build those packages.

Eldridge compared the 4 specialists of a few years ago to the resources they’ve assembled today. Today, he’s the director of aftermarket and in charge of parts and service, which ensures that precision is properly represented in promotions and packages. Smith maintains an IS manager, but it’s a strategic position with key account management duties, not a hands-on position in which one can be trapped in a rat-race or rut.

Smith has one specialist (a certified crop advisor) who serves as the data manager, and spends a lot of time with third-party ag service providers. “Loyalty among customers has changed and they want to know what you’re going to be doing for them tomorrow more so than what you did last year. Those service providers are the ones who invite us to the customer’s table. Let’s say there’s a variable-rate prescription they need enabled on a piece of equipment. We make sure that we’re right there with them and the network works very well.”

Dealing with Problem Customers? Don’t Do It!

How do you deal with those customers who are calling and shopping you against everyone else for the same GPS receiver? “You don’t mess with those people,” says Matt Eldridge, director of aftermarket sales for Smith Implements, Greenfield, Ind. “They’re a dollar buyer, it’s dial a deal. You’ll never win them over; they don’t want to be won over. Instead, spend your time with those people who are interested in your support; they’re a value buyer. They’ll make that investment if you make the investment in them. Remembering this will help get you going.”

And if you do the math, Eldridge counts 35 that he could call “precision ag” personnel today. That includes 14 in ag sales who are taking that first call and can configure and sell a product. And if parts is included, “that’s 49 people leveling out the support and managing it in the busy season; we’re no longer trying to load it all on 4 specialists.”

In total, Smith has 54 different packages (branded as “Performance Edge”) and has sold 300-plus of those programs over the last 2 years. “I’ve not heard a complaint that we weren’t getting the job done or that ‘no one called me back,’ so that part’s working.

“We’re now driving the business back to our core profit centers where we know how to make money. Service sells time, our parts department manages our inventory and our sales people make the deal.”

Sales credibility has been restored and sales is back in the driver’s seat again, where it belongs, he says managing the relationship.

He says that package selling has been instrumental in leveling the workload and avoid getting hundreds of calls exploding on the first day farmers are in the field.

Eldridge expects growth will come through key account management, its packages “Performance Edge” and the opportunities with the RTK network. And the dealership will remain on track by emphasizing its core, and also what it won’t pursue, something that was not clear in the early days of precision. “Our role is to serve as enablers in the agronomy space; to make sure the technology is doing what it needs to do, not to make recommendations or pull soil samples.”

Eldridge says the IS department made a slight profit in 2016. “That’s OK because until we could figure out where we could put the support and manage it, we weren’t going to make a profit. We had to get that piece figured out so we can manage it and get our arms around it, and then we could start at looking at making profits.”

Precision Success Only as Good as Your Internal Training