Photo above: Developed by the Australian Centre for Field Robotics at the University of Sydney, the Ladybird uses a 3-D stereo camera for weed detection of weeds and delivers tiny amounts of herbicide exactly where it’s needed. Photo Courtesy of ACFR, university of sydney

There’s just no winning with weeds. If we don’t kill them, they’ll choke out our crops and devastate yields. In earlier days, we removed them by labor intensive hoeing and cultivating. More recently we started spraying herbicides to control them. Unfortunately, this unwanted vegetation figured out how to beat the most common of the weed killers being used, leaving us with as big of a problem, we had before we started spraying.

No one is proposing going back to hoeing weeds, but it looks like we’ll be back to killing one weed at a time in the near future.

“For years, we had Roundup and we’d spray everything, it didn’t matter,” says James Fehr, general manager of Jenner Ag’s Application Division, headquartered in Harristown, Ill.

Brent Wiesenburger, precision ag manager of Wheat Growers, an ag retail cooperative based in Aberdeen, S.D., adds, “Roundup isn’t getting the job done anymore. Given the challenge of resistant weeds that we’re seeing, it’s getting trickier and trickier to kill all the stuff that’s growing out there today. So having a good plan, moving forward with some different pre-emergents, different modes of action is very, very important.”

Unlike other ag inputs where it’s possible to reduce their use to save some money, that isn’t necessarily the case with herbicides used to control weeds. “We already know that under-application brings us weed resistance. Weed resistance will continue to be a challenge so we’ve got to make sure we’re getting the right rate [of chemicals] out there,” adds Fehr. “We’ve got the technology to do that.”

Technology Not the Issue

Technology isn’t the bottleneck when it comes to effective weed control, according to Mike Martinez, marketing director for Trimble Agriculture.

“For one thing, regulatory compliance keeps increasing, getting tighter. There are other parts of the world that are a lot tighter than we are here in the U.S. and Canada, but we’re catching up,” he says. 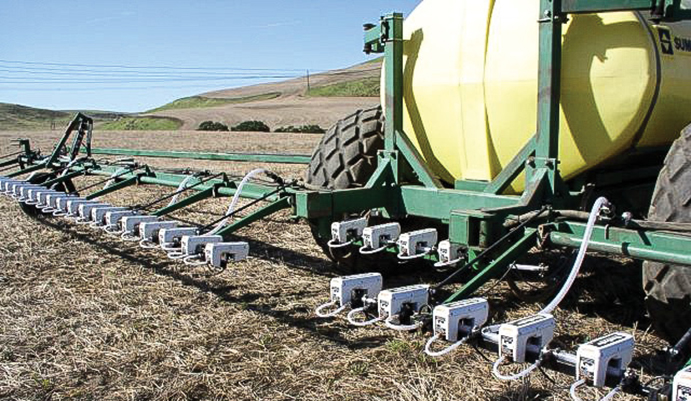 Using a array of optical sensors mounted on a application vehicle, the WeedSeeker automatically detects weeds and delivers a dose of herbicide to each weed it detects, reducing the amount of inputs that broadcast applications generally use. Photo Courtesy of Trimble agriculture

“Technology for application equipment is to the point where it’s very accurate. The ability to control where, when and how much you apply is no longer a technical challenge. We have a system that can apply a chemical at a certain rate, in a certain place, at a certain time very accurately,” says Martinez. “The bottleneck isn’t the application technology, it how do we get the instruction to our machines to apply only what’s needed? Farmers need agronomic information, really good timely instructions on when and where to apply. The technology can take it from there.”

One technology for spot spraying weeds is Trimble’s WeedSeeker, which utilizes an array of optical sensors mounted at the bottom of an application vehicle, which can be either a pull-type or self-propelled sprayer. Utilizing between 20-100 sensors, as the vehicle moves through the field at speeds up to 15 mph, the sensors automatically detect the weeds and immediately spray that particular plant on the spot. “This is very similar to our GreenSeeker technology, which is used for applying nitrogen,” Martinez explains, “but it’s customized for spraying the weeds.”

According to Martinez, technologies like this that can significantly reduce the amount of chemical applied are particularly helpful for use on glyphosate-resistant weeds. “These often require very expensive chemicals for control, so it’s not economically practical to do a broadcast application. It takes a very precise, spot treatment to eradicate these weeds or else it’s unaffordable. This type of technology in conjunction with our application and control system, allows the farmer to go in and automatically spot spray each weed. Often times it takes 10% or less of the chemical that you would normally use if you were to do a broadcast application.”

The technology behind WeedSeeker is not new, but has been around for about 10 years according to Martinez. It’s the current economics — high chemical costs and low commodity prices — combined with increasingly challenging spate of resistant weeds, that is making the decision to utilize the technology more practical. 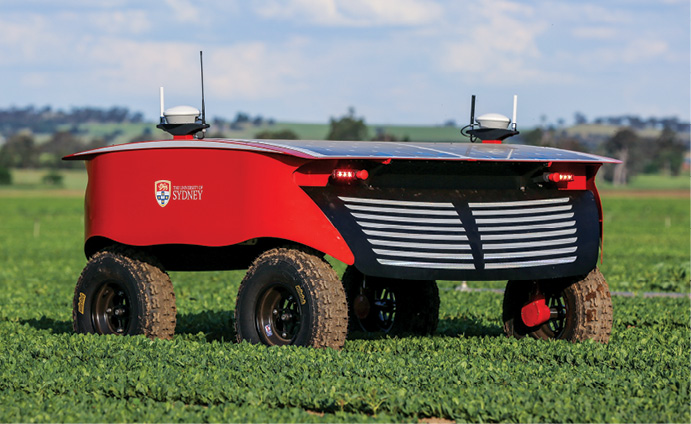 Under development at the University of Sydney, RIPPA (Robot for Intelligent Perception and Precision Application) automatically applies the correct dose of required fluid at high speeds. Photo Courtesy of ACFR, university of sydney

“What we’re seeing is adoption in various regions,” Martinez explains. “It’s usually the regions that are having the most trouble with the resistant weeds. Australia was one of the first hit with some very hearty varieties of weeds that just would not die with traditional herbicide. We saw that market begin to adopt WeedSeeker about 5 years ago. Now that problem is in South America. Not that we don’t have weed resistivity issues here in North America, but the difference between the amount of varieties coming out that are resistant, and the ratio between that and the affordability of the chemical that can take care of them; the hardest hit areas were Australia and now Latin America. I suspect that the North American market will start feeling those same things here in the next few years.”

That being the case, it shouldn’t be too surprising that some of the most advanced systems for eradicating weeds are being developed in Australia.

Wiesenburger points to robotic developments taking place at the Australian Centre for Field Robotics at the University of Sydney. “I would say that the next thing we’ll be talking about in probably 5-8 years will be robots doing directed spraying of only the weed or plant that needs to be taken out, and not the flat fan type of application we have on our sprayers today.”

According to information from ACFR, the Ladybird robot performs targeted spot spraying in real-time. The unit detects the locations of seedlings in 3D using a stereo camera, and then fires a small and controllable volume of spray at each target. Coupled with algorithms for automatic weed detection, this technology can be used to deliver tiny amounts of herbicide exactly where it’s needed, allowing a herbicide volume reduction to only 0.01% compared with conventional blanket spraying applications.

Another ag robot under development at ACFR is RIPPA — Robot for Intelligent Perception and Precision Application — a four-wheeled, solar powered device that identifies weeds in fields of vegetables and zaps them individually. The According to ACFR, at the moment it does this with precise, and precisely aimed, doses of herbicide. But it, or something similar, could instead use a beam of microwaves or even a laser. This would allow the crops concerned to be recognized as “organic” by customers who disapprove of chemical treatments.