With 360 Yield Center making a strong push into the market — across several different fronts — we asked Larkin to define 360 Yield Center’s “sweet spot” during an interview at this week’s Farm Progress Show in Decatur, Ill.

“We’re all about helping growers with nitrogen — to measure, move and make it available — and to provide new ideas to supply to the plant at the time it needs it. We can provide the tools to supply what the plant needs in that rapid late in the season.

“Corn uses nitrogen at V8, V10 and V12, but most of it today gets applied at fall, at preplant or at V4. But a lot of environmental change happens between V4 and V10.

“By knowing what is available means you can apply enough — and just enough — to meet your yield goals. Growers can now push that decision as late into the season as possible.”

While much of the industry has become familiar with the firm’s Y-Drop system that provides late-season precision application via the sprayer, the firm has had several more recent market entrances, the SoilScan, Chainroll and the Equi-Flow anhydrous application.

The Soilscan is a portable lab system (from the tailgate of a pickup or utility vehicle) that was developed by industry veteran Rhett Schildroth, who also recently joined the 360 team as engineering manager.  “In 5 minutes, you can have accurate soil nitrate reading,” Larkin says. The five step test determines the nitrate ions present and from there, he says, the tool “can recommend a nitrogen plan through the end of the season to get to the yield goal that you set.”

Nitrogen availability starts at the combine. The Chainroll is a retrofit stalk roller that “crimps and breaks open the stalk, but keeps it long and connected, to open the stalk for microbial activity. It does not bury that residue, but accelerates the breakdown so not tying up that nitrogen.” It’s also promoted as avoiding clusters of small residue that tie up nitrogen and impede seedbed preparation. The units are available for John Deere 40, 90 and 600 series corn heads for fall harvest, with additional models coming in 2016. 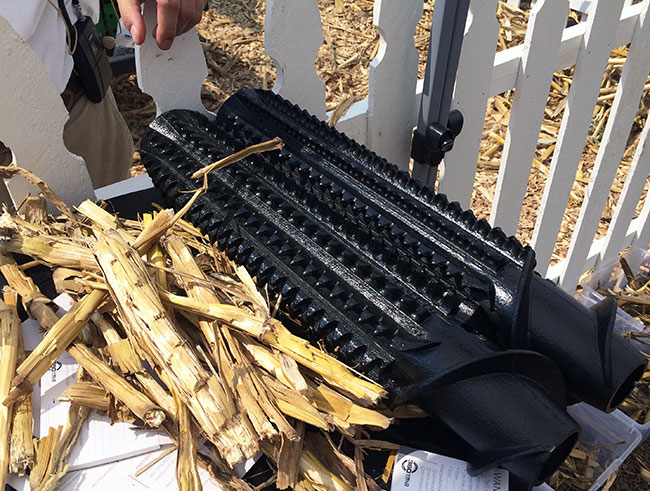 The most recent news is 360 Yield Center’s entrance into the anhydrous ammonia market. The firm is now offering what is called Equi-Flow precision anhydrous application system. “Anhydrous is the most popular form of nitrogen application, but there can be up to a 25% variation from knife-to-knife. We saw an opportunity to bring the accuracy of the aNH3 system and we acquired the intellectual property for two of their systems at the first of August.”

Because of nitrogen orientation, ag retail is the primary area of adoption for 360 Yield Center’s tools, he says. “Adoption is most taking place among growers with self-propelled sprayers. Ag retail has the model of best demonstrating self-propelled spraying technology and ag retail also sells the inputs.” He also cited precision ag companies who’ve started selling the tools as another model of growth.