For top quality hay, which offers the biggest benefits for producers?

Above photo: Years of research has demonstrated that a wide, even swath behind the mower produces the best conditions for quick dry down of a hay crop, which results in high nutritive value of the final forage.

There may not be a consensus when it comes to the best type of mower to use in harvesting hay. But increasingly the one practice researchers agree on is wide swathing as the best way for producers to ensure the high nutritive value of their hay.

While the hay industry has overwhelmingly moved away from the sickle-bar mower to faster disc mowers and mower-conditioners, research shows for top quality forage in the bale, the older technology was not far off the mark.

“The sickle-bar was the gold standard. It cut the forage, laid it on the ground and nothing else,” says Tom Kilcer, forage consultant and former long-time Cornell extension educator in Kinderhook, N.Y.

“I’m not saying we should go back to sickle-bar technology on all of our hay meadows, and I’m not against mower-conditioners where they are needed in certain forages, but dealers should keep that ‘gold standard’ in mind as they advise producers on whatever machinery they’re using to harvest hay.”

Research shows a wide, even swath of hay distributed over the entire width of the mower is the key to quick dry-down and maximum quality retention in harvested forages.

Forage researcher Dan Undersander, University of Wisconsin, says growers should strive to have 70-80% of the cut area covered with the swath. “The wider the better,” he says. “Ideally, you want to drop 15-20% of the moisture in the hay as quickly as possible to retain the starches and sugars that would be lost to respiration.” 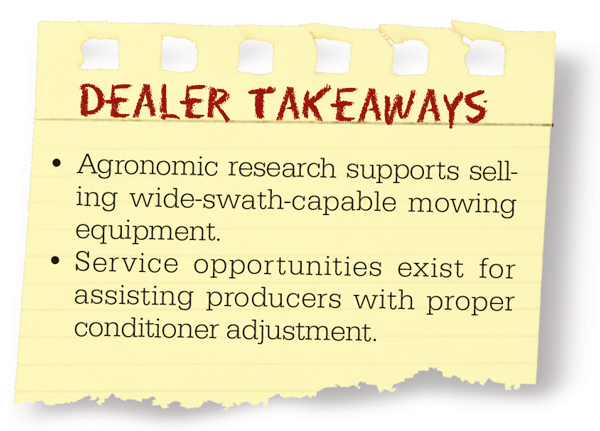 Undersander says by the time downed hay reaches 60% moisture, respiration has largely stopped, so the goal is to reach that level as soon as possible after harvest. “Many times hay is being harvested at 75% moisture, so rapidly reaching that 60% mark is quite feasible using a wide, even swath exposed to the sun.”

“The biological reason for this is that more of the hay is exposed to sunlight which continues photosynthesis in the downed hay,” he explains. “Photosynthesis takes CO2 and water to make carbohydrates and release oxygen. The respiration process consumes water and the plant dries. It has nothing to do with machinery and everything to do with sunlight.”

The physics of the process is simple: The more sunlight hitting the swath, the higher the swath temperature. The higher the temperature, the greater the vapor deficit. “These are all things that speed the drying process,” says Kilcer.

“The sickle-bar was the gold standard. It cut the forage, laid it on the ground and nothing else…”

“Data loggers show significant differences in moisture content of wide vs. narrow swath rows. Whatever equipment a producer has must provide a wide, even swath,” he says.

Kilcer adds that the “wide swath” research results have been building for years, but only recently has it seemed to begin to get traction with growers and equipment manufacturers.

“It amazes me the number of folks who have not heard of this process, and some farm equipment companies are still in denial,” he says. “There are some companies, however, who are adjusting their equipment designs to accommodate more rapid drying and that’s a positive thing.”

Kilcer adds that when disc mowers began replacing sickle-bar designs, many featured tilted knives and cone tops. “This design creates a whirlpool effect which ingests dirt and makes separate windrows instead of leaving a wide swath.”

Kilcer notes mower designs with flat knives tend to create more uniform swaths. He adds that some manufacturers are now moving away from installing drums on either end of the mower, which were designed to bring everything into a narrow swath. 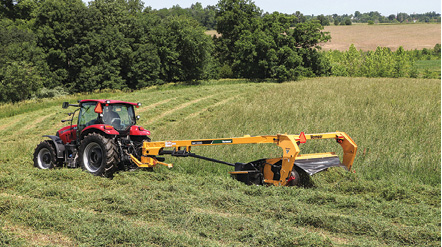 To mow or condition hay is a question that continues to be asked across hay meadows nationwide. Research shows that the answer centers on the final product the producer is aiming for.

“Flat knives keep the cutter bar out of the dirt, resulting in much less ‘ash’ content in the feed,” he says. “Research shows it takes very little dirt in hay to significantly cut milk production in dairy cows.”

Kilcer and Understander both say cutting height is important to proper dry-down, and higher cutting heights tend to improve feed quality. The improvements come from lack of dirt in the hay, and increased air circulation (better drying conditions) under the wide swath as it exits the mower and falls on a supporting stand of stubble.

“With a cutter bar height at 3 inches for alfalfa, which is slightly higher than most producers are cutting, you lose some yield, but that’s low-quality yield,” says Undersander. “Also, you pick up less dirt.

“If you have cool season grasses, the recommendation is to cut at 3.5-4 inches, and in the south where there is perennial warm season forage, cuts at much shorter heights are acceptable as long as you stay out of the dirt,” he explains. A 6-inch cutting height is recommended for warm season annual grasses.

A Case for Conditioning

Undersander says mower-conditioners are not important for producers making haylage, but they can be crucial for other types of hay making.

“Conditioners largely do not affect leaves of hay crops, but aid in drying down of tough stems,” he says.

Sickle-bar mowers are still widely used in smaller hay operations, but the industry move to disc mowers over the past 20 years is being driven by a 20% decrease in labor with their use, compared with sharpening and maintaining a sickle-bar unit. This trend continues despite higher purchase prices per foot of swath and higher horsepower requirements needed for the disc mowers.

Generally, flail conditioners are reserved for grass crops and roller- conditioners are best for alfalfa. Flair conditioners scrape or tear the stems.Rollers, when properly adjusted, have little effect on leaves, but crimp the stems to allow dessication to begin.

“You want to adjust the severity of conditioning to break the stems to encourage drying. Anything more than this will result in leaf loss and excessive horsepower requirements.”

He suggests cutting around and looking at the swath. “Expect to see 5% leaf bruising (darkening of some leaves). If you see none, you are under conditioning. If you see more, you’re over conditioning,” he explains.

“Research suggests there’s little difference in the drying performance of steel vs. rubber rollers in conditioners,” he says. “Rubber is better if you have stony fields, but steel shows much more wear resistance.”