5 Trends That Will Reshape Farming

A new study from the Boston Consulting Group (BCG) identifies the most influential trends that will affect farming practices and structures through 2030. These include precision farming, automation, consolidation, professionalism and labor shortages.

According to the report, “Several megatrends are combining to increase demand for agricultural outputs and thereby promote the development of productivity-enhancing innovations. As the global population approaches 9 billion by 2050, the U.N. Food and Agriculture Organization (FAO) expects that demand for agricultural outputs will increase by 60% compared with the annual average from 2005 through 2007, representing an increase of approximately 1% per year. However, the acreage cultivated globally will increase only negligibly.”

Specifically, the FAO and the Organization for Economic Co-operation and Development predict that global cereal production will increase by 350 million metric tons by 2023, a 15% increase compared with the annual average from 2011 through 2013. This higher production will be driven primarily by a yield increase of 10-14%. The increase in arable land will be low in comparison. Planted area for cereal will increase by 2-4% globally, but this will mainly be driven by increased arable land in Eastern Europe.

The report goes on to say that, although demand and production will increase globally, their levels are expected to differ among regions. North America and South America will see an increase in net exports of most commodities, while Asia (especially China) will see a corresponding increase in net imports. For countries in Western Europe, flat production growth will cause their net negative trade balance in agricultural products to persist. In Eastern Europe, a net export surplus in cereals and oilseeds is forecast; however, this will require political stability in Ukraine, the main contributor to the surplus.

“From this high-level perspective, the outlook for the agriculture industry looks promising, notwithstanding temporary downturns, such as the current slump in corn and soy prices,” says the BCG report. “These trends will increase demand for the innovative equipment, inputs and digital services needed to improve farm productivity, especially yields. At the same time, they will help consolidate the customer base for input providers, which, in turn, will increase the professionalism of purchasing decisions and the use of pooled purchases.”

The research included an analysis of all agricultural patents registered worldwide between 2010-2014, as well as interviews with farmers across Europe. The report’s authors say, “Although our research focused on Europe, the strategic implications are applicable globally. Companies can apply our findings to develop the strategies and capabilities that will allow them to harvest value from emerging business models in agriculture.

“Our interviews with European farmers suggest that farmland consolidation and a labor shortage will be among the major trends affecting farming structures through 2030. The labor shortage will intensify as a growing number of family members choose to pursue careers outside of farming. Combined with the drive to consolidate, this will force many retiring farmers to sell their land. Potential purchasers will include not only neighboring farmers but also private-equity and sovereign wealth funds, although in some countries their investments may be limited by restrictions on farmland ownership. These investors may try to optimize yields and improve operational efficiency in order to increase returns.” 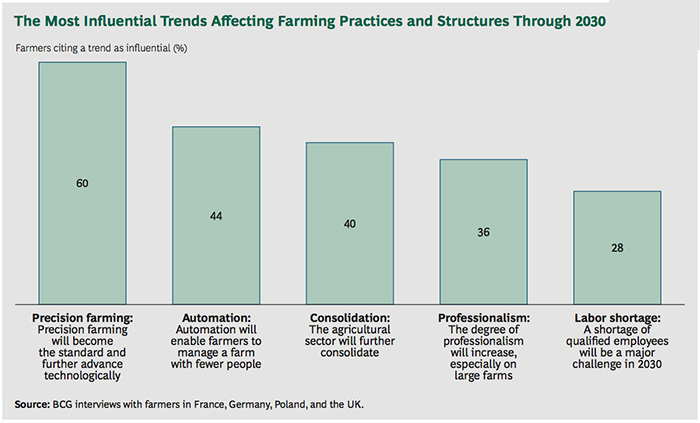 According to a new research report, “Crop Farming 2030 — The Reinvention of the Sector,” from the Boston Consulting Group, the use of precision farming technology will be the major trend reshaping farming worldwide. Precision farming uses data at the level of the square meter or decimeter, or even of a single plant, to optimize the consumption of inputs and make adjustments to accommodate variable characteristics within and among fields. “In the past decade, precision farming has already begun to revolutionize farming practices, and we expect its growing influence to promote improvements in variable-rate applications in seeding, fertilizing and crop protection.” As indicated, 60% of the farmers interviewed believe that precision farming will be widely adopted by 2030. Its spread will be enabled by the increased use of sensors, software and wireless connectivity on farming implements, thereby turning plows, planters, spreaders, sprayers and other add-ons into intelligent equipment. Such implements will control the tractor through two-way communication, providing information about the current load, for example or sensor data about the soil. Innovative technologies will drive further improvements, but the pace and extent of their adoption remains to be seen, according to the report. 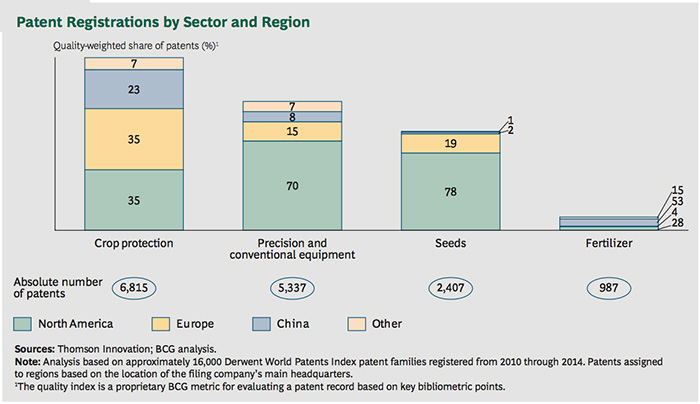 The Boston Consulting Group’s analysis of patent filings from 2010-2014 related more to crop protection than to equipment, seeds, or fertilizer. “Enabling resistance to viruses would be revolutionary because antiviral crop protectants are not currently available. In some cases, these new traits are organized on ‘gene cassettes,’ which ensure that they are inherited together and will not separate upon further breeding. As these innovations are refined during the next decade, plants will be made resistant to devastating diseases like wheat rust, potato blight and mosaic viruses, according to the BCG research report. The introduction of such plants to the market will not only reduce yield volatility resulting from disease pressure but possibly also the need for chemical pesticides.