ERS’s current farm income forecast for 2014 includes $4.4 billion in Livestock Forage Disaster Program (LFP) payments, an over 700% increase from total LFP payments made during the previous 5 years combined. LFP, which is accounted for in farm income accounting under “ad hoc and disaster assistance payments,” is expected to account for over 41% of total direct U.S. Government payments made to farm operators in 2014.

LFP was initially authorized by the Food, Conservation and Energy Act of 2008, with funding through Sept. 30, 2011, to reimburse eligible farmers and ranchers for grazing losses due to a qualifying drought or fire. The 2014 Farm Act amended the LFP provisions slightly and made it retroactive to Oct. 1, 2011. LFP payments to eligible livestock producers depend on the severity and duration of the county’s drought (or fire on federally managed rangeland); the type, kind, weight, and number of livestock affected; and the U.S. monthly per head payment rate —based on estimated feed costs — for the year.

The large spike in expected 2014 LFP payments is largely a one-time event. In addition to covering ongoing livestock grazing losses, 2014 LFP payments also cover losses incurred back to Oct. 1, 2011. These retroactive payments account for 84.2% of the $4.4 billion expected to be paid out in 2014. In addition, higher payments in 2014 reflect rising feed costs on retroactive payments (covering losses in 2012-13), while feed costs are expected to decline in 2014. Finally, farmers had an incentive to apply for eligible program payments early to avoid a 7.3% sequestration reduction mandated by the Budget Control Act of 2011 on LFP payments requested after Sept. 30, 2014.

However, the 2014 Farm Act included a number of provisions that could permanently raise LFP payments in the years ahead, although not nearly to 2014’s payment levels. The 2014 Farm Act increased the maximum number of drought months per year used to determine LFP payments from 3 to 5. The combined individual/entity payment ceiling for LFP, Livestock Indemnity Program, Emergency Assistance for Livestock, Honeybees, Farm-Raised Catfish and the Supplemental Revenue Assistance Program (SURE) payments was raised from $100,000 to $125,000. Furthermore, SURE was not reauthorized, leaving more room for higher LFP payments under the combined payment ceiling going forward. Under the 2014 Farm Act, an individual or legal entity with an average adjusted gross income exceeding $900,000 is ineligible for LFP payment — up from the previous cap on average annual adjusted gross non-farm income of $500,000. Finally, eligible producers are no longer required to purchase risk management coverage under the Federal crop insurance program or Noninsured Crop Disaster Assistance Programs, thereby increasing the potential pool of claimants. 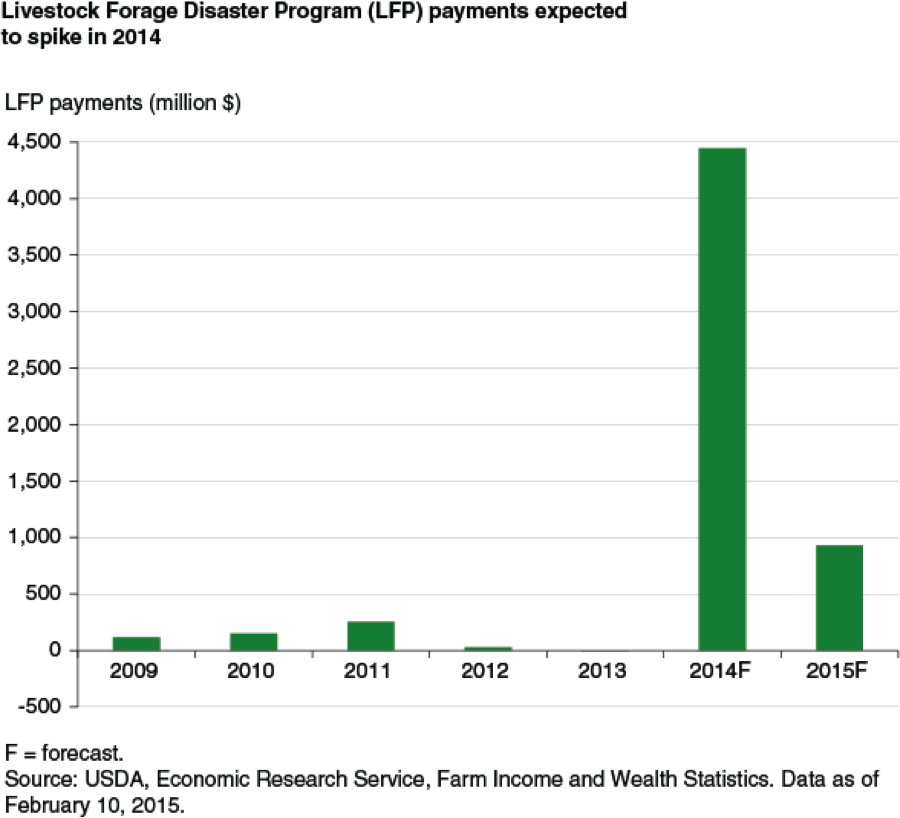