Titan Machinery followed through on its April 10 announcement that it would close and/or consolidate 8 of its stores and reduce its overall headcount to improve the performance of its construction equipment operations and counteract the slowdown in ag machinery sales. This allowed the company to report that it increased its overall revenues by 5.4% during the first quarter of fiscal year 2015.

Titan’s revenue growth came largely from increased sales in the company’s construction (+23%) and international (+9.4%) segments, which helped offset a 2.1% decline in its much larger ag equipment business during the first quarter. At the same time, the company reported overall equipment revenues grew by 3.1%, parts sales improved by 8.8%, revenue for service operations rose by 15.9% and its rental business increased by 23.7%.

Total revenues came in at $465.5 million for the period ended April 30, 2014 vs. $441.7 million during the same period a year earlier. At the same time, Titan registered a net loss of $4.1 million for the quarter, which compares with $0.4 million a year earlier. Part of the falloff was attributed to $3.2 million in costs associated with the 7 construction stores it closed, which reduced that segment’s headcount by 12%. The company also consolidated one ag location into another one of its ag dealerships. Overall, Titan reduced its total headcount by 4.5% with the realignment. 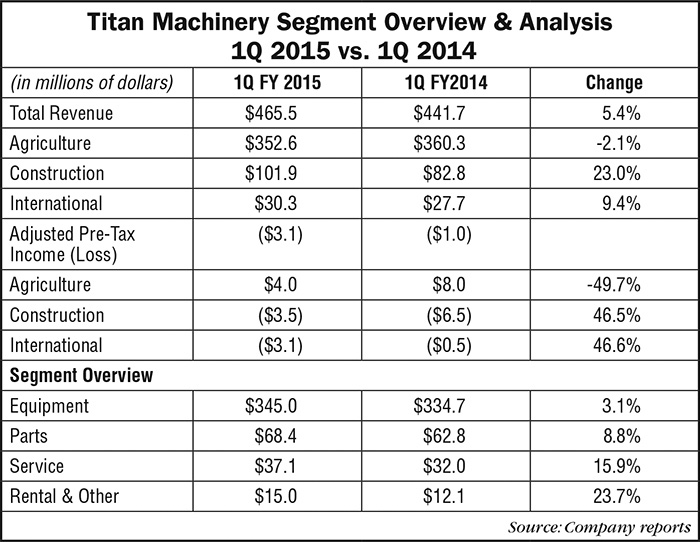 Titan reiterated its target of reducing equipment inventory by $250 million, much of which is expected to come in the second half of its fiscal year. According to Rick Nelson, analyst for Stephens Inc., the company has made some headway in this regard. “Titan reduced its inventory level $102 million in the quarter, but still ended the quarter 12% above prior year levels. Floorplan interest expense jumped 33% to $4.8 million on account of the higher inventory levels and increased proportion of [it being] interest bearing,” says Nelson.

The analyst noted the headwinds ahead for the ag equipment business, as well as some underlying strengths that should bolster the industry somewhat during the remainder of the year.

“Positives include strong customer balance sheets and low interest rates. In the first quarter, the ag segment produced same-store revenue growth of 1.2% and a pretax profit of $4 million vs. $8 million a year ago. Full year guidance calls for a 10-15% decline in same store ag revenues,” reports Nelson.

Titan management reiterated its guidance for the year, calling for revenue levels of $1.95-2.15 billion for the fiscal year, and net income of $14.8-21.1 million.

Commenting on Titan’s first-quarter EPS miss, Mircea (Mig) Dobre, analyst for RW Baird, says they were lowering their outlook for the dealer. “Our estimates assume agriculture organic revenue declines of 14% with international growth of 7%. We expect the North American demand environment to remain challenging (lower commodity prices, massive recent equipment investment) and note that same-store growth in Titan’s international segment is far from certain given considerable instability in Ukraine and challenging economic conditions in Romania.

“Our model reflects acceleration in construction organic growth (16%) as end market improvement should allow for an uptick in new equipment sales as well as improvement in rental utilization. This results in a revenue estimate of $2.09 billion.”

Dobre says he expects improved gross margins outside of the company’s equipment sales and continued reduction in used equipment inventories, most of which will take place in the second half of Titan’s fiscal year.

“Gross margin is expected to expand 70 bps on a year-over-year basis to 16.6%, reflecting better sales mix as revenue growth in parts, service and other, which includes rental, outpace weakness in lower margin equipment. We forecast continued weakness in equipment gross margins — down 20 basis points year-over-year to 8.3% and at the low end of management’s guidance — given continued ag equipment pricing pressure related to weaker demand.”