The “big volume markets” continue to be China and India, where ca. 50% of the units sold worldwide are registered. However, most of these tractors have much lower average power than the tractors used in the mainly large scale farming structures in major agricultural countries like the US, Brazil and Russia or the intensive farming sites in Western Europe. The European market represents a considerably high weight for global industry turnover.

In 2014, a pronounced upswing in the American tractor market came to an end. But with more than 235,000 tractors sold in North America (USA and Canada), volumes approached the very high levels at the beginning of the 2000s. In both countries, the “semi-professional segment” below 40 hp makes up about 50% of the market volume. While demand for these lower power categories had calmed down considerably between 2009 and 2011, i.e. in the course of the financial and subprime crisis, a clear recovery could be observed in the past two years, with sales exceeding the 100,000 units mark again in the US alone. A realistic estimation for the entire North American market could be a decrease by one fifth in 2015, towards previous average levels. Tax incentives are much reduced now in the US. The major obstacle is the over-supply of the market, so that much depends on movements towards a market clearance for the high used machinery stocks. 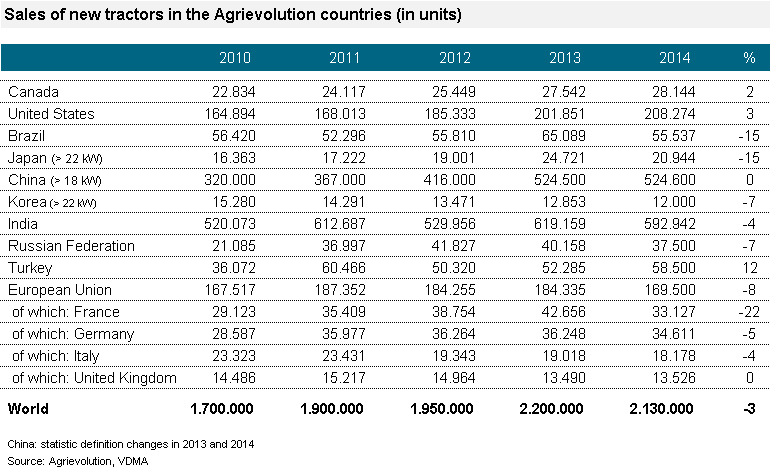 On the Brazilian market, the last peak was also in 2013, when more than 60,000 tractors were sold, many of them with smaller engines due to a special subsidy scheme for small family farms. In 2014, the market came back to the levels of 2010-2012 with around 55,000 units, of which about one third is >100 hp. The Brazilian market remains highly subsidized (although only for domestic production machines) mainly through loan subsidy programs (e.g. FINAME). Initial trends in 2015 show another decline, but it is expected to be very limited.

On the Asian continent, Japan, the most developed country for agricultural machinery in the region, experienced only a short-term boom period on the agricultural machinery and tractor market in 2013. After the last spring season, tractor sales went down very sharply. At the end, the result was a decline by 15% for the calendar year 2014.

The Chinese market has grown considerably over the past few years, but for the first time after a long growth period, sales went down, especially in the very small power segments. On the other hand, professional users (co-operatives, contractors) are gaining ground on the market, but there are also certain profitability problems in the sector, e.g. among the dairy farms in the North of the countries, that may have a slowdown effect on the market in 2015.

The unit numbers for tractors in India are the highest for one single country in the world. In 2014, 593,000 units of tractors were sold on the subcontinent. After a strong first half of the year, sales went down from month to month, especially in the last quarter of the year. But this trend was stronger for the very small size categories, which are predominant on the market. It seems that the Indian market could reach similar levels again in 2015.

Turkey is also a high volume market for tractors. 2014 was a year with very strong investment by farmers, so that tractor sales almost reached the very high level of 2011. The market has shown a high volatility over the past years.

While markets in America and Asia have gone up amazingly over the past years, sales on the European continent “underperformed” in most cases. The manufacturers always find very different circumstances here from country to country, so that growth rates are balanced out when we look at total European sales. Nevertheless, with a decline of 8%, the trend was quite clear in the past year.

The previously largest market is France with a still relatively high number of potential customers. In 2014, the number of tractor sales went down to 33,000 units, a decline by more than 20%. The market conditions remain challenging in France due to lower agricultural commodity prices and the adaption process to the new EU agricultural policy scheme. Germany has become the biggest tractor market in Europe in the past year. The average size of a new tractor sold in Germany for agricultural is 155 hp, and one in 5 tractors is >200 hp. Demand is estimated to remain considerably below previous levels in this year. Trends in Italy tend to remain rather weak, and a general decline in Europe for 2015 by ca. 5 to 10% seems realistic for most major markets, including United Kingdom, Scandinavia and Poland. In the Russian Federation, tractor sales in 2014 decreased by ca. 6% to 37,500 units. A sharp market decline occurred in the medium size segment between 50 and 100 hp. Market conditions remain challenging for this year.

Agrievolution estimates a decline of the global tractor market by another 5% in 2015, with stronger trends in the emerging markets and a weaker demand in the developed markets of North America and Western Europe. 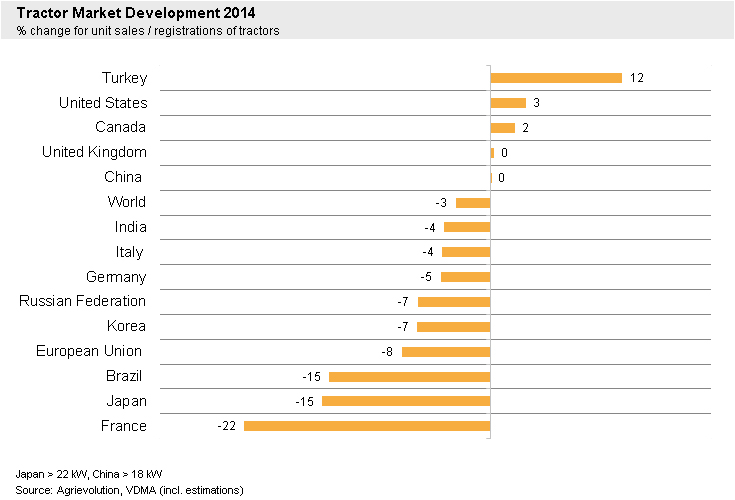