In addition to significantly increasing crop yields, a new report from USDA suggests that intensifying land use could be another way to meet the rapidly expanding demand for ag commodities. The report, “Multi-Cropping Practices: Recent Trends in Double Cropping,” was issued in May and reports that between 1999 and 2012, double cropping — harvesting two crops from the same field in a given year — occurred on only 2% of total cropland in most years.

In 2012, U.S. farmers double cropped about 2.2% of cropland, or 8.7 million acres, slightly more than the average of 8.2 million acres double cropped during the 1999-2012 period. Between years and across regions, the prevalence of double cropping varied considerably as farmers responded to local conditions, such as weather, climate and market incentives.

In comparison, from 2006 to 2011, an average of 1-2% of cropland acres were reported to be cover cropped, and 11-26% of planted acres for selected crops were grazed following harvest (an example of an integrated crop-livestock system). Soybeans were, on average, the most common crop found on double-cropped acres over this time period, and, in 2012, winter wheat most commonly preceded these soybean plantings. However, regional and temporal variation is apparent in all double-cropping trends, likely indicating farmers’ responsiveness to local condi­tions and changing market incentives. 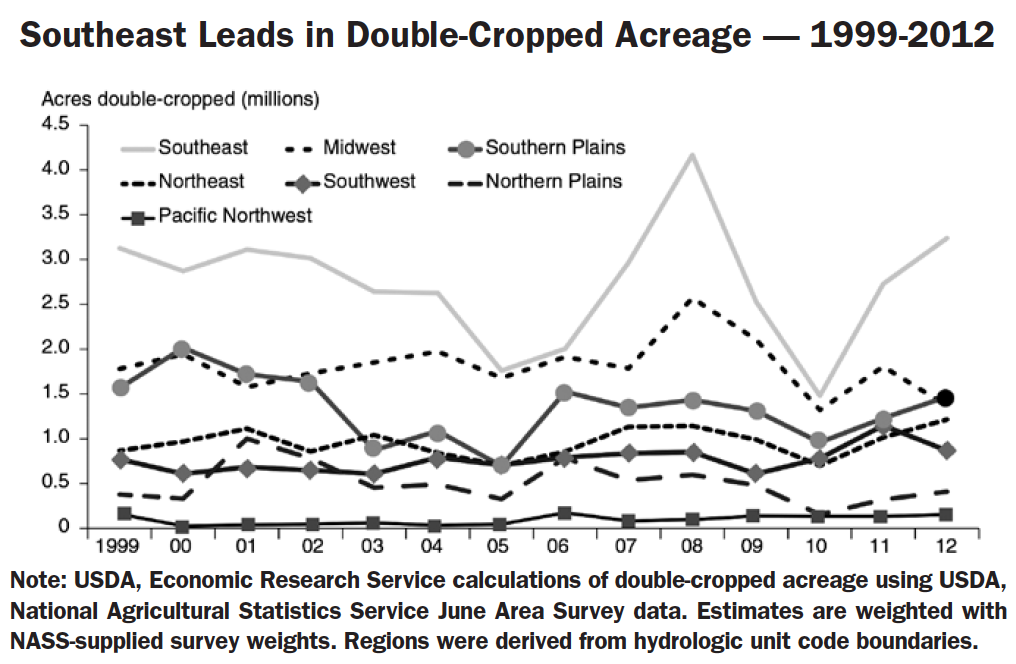 Focus Switches from Corn Production to Demand; Could Improve Outlook for Equipment Sales