By Dave Kanicki posted on January 6, 2014 | Posted in Data & Forecasts

It’s 2014, so we might as well kick the year off and talk about what the expectations are for the year. For farm equipment sales, the speculation has to start with commodity prices and the general consensus calls for the three major crops — corn, soybeans and wheat — to stay about where they are today, or even slip a bit.

But when it comes to ag economics and forecasts, one of the experts I like to check out regularly is Gary Schnitkey, professor in the Dept. of Agricultural and Consumer Economics at the Univ. of Illinois. Last month at the 2013 Illinois Farm Economic Summit, Schnitkey said that corn prices are projected to average near $4.50 per bushel for both the 2013 and 2014 production years vs. an average of over $6.60 in 2012. “Over $1.00 per bushel price declines will significantly reduce gross revenues on Illinois farms” as it will for farms in all grain producing states.

In his presentation, Schnitkey goes on to say, “Even with cost declines, 2014 incomes are projected lower because gross revenue declines are larger than cost declines. Note that while the projected 2014 net income is significantly below 2010-12 levels, it is still higher than average incomes during the 2001-2006 time period.

“For most farms, lower incomes will not cause financial stress, particularly as most farms have built financial reserves during the past several years. However, there will be a cohort of farms that face financial stress,” says the U of I professor. “These farms have large percent of their acres cash rented at high cash rent levels. Almost by necessity, these farms will have to lower cash rents so as to not face large losses in 2014.”

He goes on to say lower farm incomes will lead to two adjustment for most farms. These include reducing expenditures for machinery and other capital goods, as well as cash rents on farmland with above average cash rents will likely need to decrease.

According to Schnitkey, “From 2010 to 2012, capital expenditures on grain farms enrolled in FBFM (Farm Business Farm Management) averaged over $100 per acre. This compares to an average capital expenditure near $45 per acre in the early 2000s. Much of the higher recent expenditures can be explained by higher incomes and the desire to shelter incomes from taxes through depreciation and expensing resulting from machinery purchases. Now, reductions in machinery purchases are necessary as incomes have declined.”

This is not a surprise. With lower incomes, farmers have less to shelter. And with the generous depreciation rules currently expired, it’s intuitive that farmers have less cash and incentive to invest in new machinery. Schnitkey confirms what most of us know already.

As our colleagues from Cleveland Research illustrate in each issue of the “Dealer Sentiments & Business Conditions Update,” cash crop receipts correlate very closely with new equipment purchases as shown in the chart below.

In the most recent issue, the accompanying chart shows the USDA’s updated crop supply and demand forecast for the 2013-14 crop year and points to a 13% decline in our simplified cash receipts proxy, in line with the November forecast. The chart illustrates North American high horsepower tractor and combine sales on a one year lag vs. our simplified farm cash receipts proxy using the three most important crops — corn, soybeans and wheat. If historical trends hold, this would imply that 2014 could be a challenging year for equipment demand vs. 2013, as the correlation between equipment sales and cash receipts has provided a good proxy for future equipment demand. 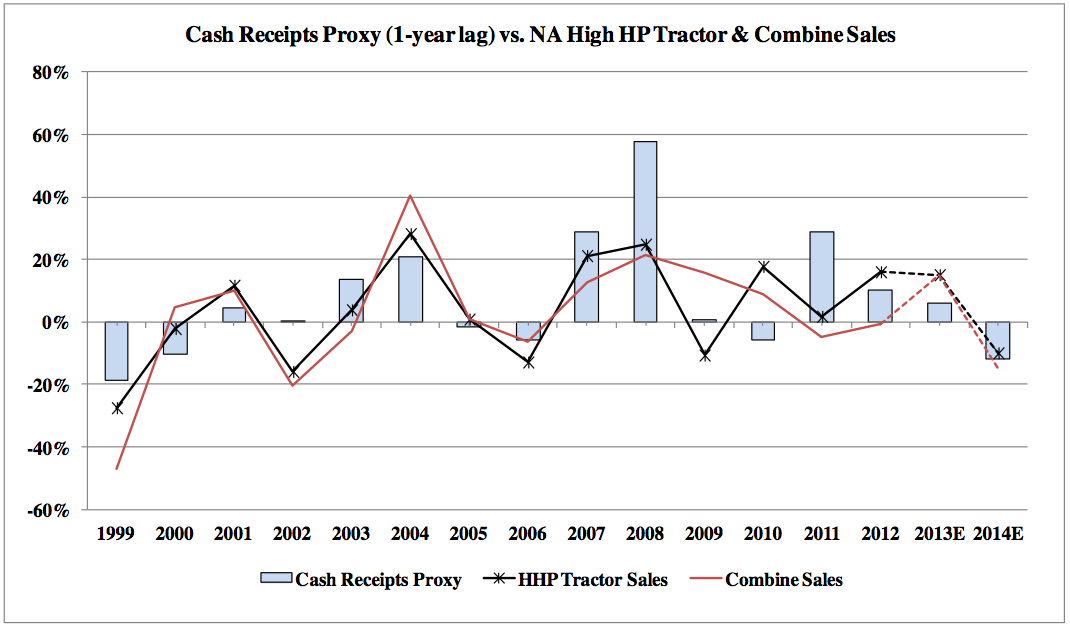 So this is our starting point in trying to get a handle on the year ahead. But as the Danish proverb puts it, “It is difficult to make predictions, especially about the future.”

Another Decade Down: More of the Same Ahead?

Corn Planting Well Ahead of Last Year and 5-Year Average