ClearFlame Engine Technologies announces developments that could soon put ethanol in the fuel tanks of farm tractors as well as many of the nation’s over-the-road trucks as it vies for clean fuel alternatives.

It’s rare news that can bring a smile to corn farmers, environmentalists, over-the-road truckers and anyone else who uses a diesel engine for a living, but ClearFlame Engine Technologies may have brought Christmas early this year to all those folks.

The Illinois-based startup has been working on technology to take conventional diesel fuel out of heavy-duty diesel engines over the past several years by making compression-ignition engines “fuel agnostic.” ClearFlame aims to leverage existing internal combustion engine technology with low- to no-carbon fuels such as ethanol and other clean fuels.

In a surprise announcement in mid-September the company unveiled several developmental milestones that show its engineering may soon be commonplace in Class-8 trucks and under the hood of farm equipment. After all, John Deere made substantial investments in ClearFlame earlier in the year. 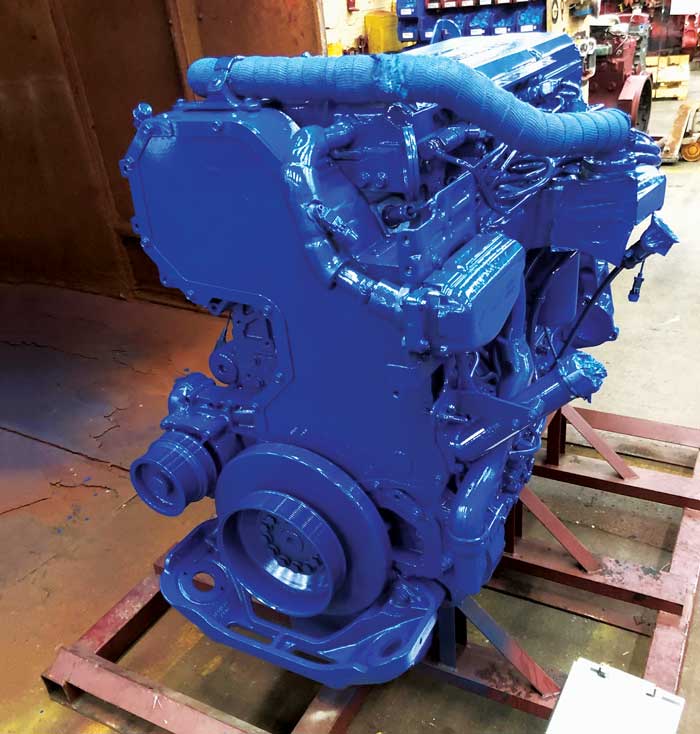 This compression-ignited power plant looks like millions of other “diesel” engines in use across the world, but this one can run on domestically-produced ethanol. Similar engines will be available soon through long-time engine rebuilder Reviva and serviced through 9 Midwest Vander Haag’s Inc., outlets.

The tractor maker announced plans to field test the technology on an 8R tractor late in 2022, with additional plans to move the system into harvesters in the future.

As Ag Equipment Intelligence spent the summer preparing its newly-released special report “Alternatives to Fossil Fuels for Farm Use,” ClearFlame CEO BJ Johnson explained using a fuel such as ethanol in a diesel-type engine requires cylinder head designs capable of higher combustion temperatures and an alcohol-compliant fuel injection system. The ClearFlame designs require only 10-15% of diesel engine parts to be swapped out, he says, noting anyone who can work on today’s diesel engines will be able to work on a ClearFlame engine.

While hesitant to talk about engineering specifics, other than the company’s system use of a traditional diesel engine design up to the cylinder head, co-founder and chief technology officer, Julie Blumreiter says the ethanol system offers the lowest total operating cost when compared with diesel, natural gas, electric and hydrogen platforms.

Also, she says the agreements with Reviva and Vander Haag’s Inc. show the company can use existing diesel engine platforms to quickly commercialize the technology for more than 250,000 mechanics who currently service diesel engines and the industries which rely solely on diesel-power for their livelihoods.

Blumreiter says ClearFlame’s cost per mile is expected to be 40% lower than electric and 30% lower than hydrogen alternatives in over-the-road trucking applications, plus it offers a cost-effective path to substantial reductions in greenhouse gas (GHG) and tailpipe emissions compared with other carbon-reduced alternatives.

ClearFlame is estimated to provide a 42% lifecycle carbon reduction, compared with conventional diesel-fuel power, as well as about 22% lower GHG than battery electric vehicles based on the current power sources for the nation’s electrical grid.

Ethanol producers and farmers growing corn and other grains to supply the ethanol industry should welcome these developments, since the largest market for ethanol has been for use as a blending feedstock for refineries to meet Renewable Fuel Standard (RFS). But this market has been shrinking since 2017 as auto fuel economy has improved and economic disruptions have lessened U.S. driving habits.

The Department of Energy estimated 2021 diesel fuel consumption, the bulk of which was burned in over-the-road trucking and heavy-duty off-road agriculture, mining and construction applications, at 128 million gallons per day — or about 15% of the U.S. petroleum consumption.

ClearFlame’s technology obviously shines a light of tremendous potential for home-grown fuels around a door that appears to be opening on a new era of “diesel” power.