The use of electric current as a weed-destroying mode of action continues to gain traction globally as business alliances forged in late 2020 promise to bring the technology to North America, Europe, Australia and South Africa.

The technology, dubbed “Electroherb” uses a tractor-mounted generator to produce current which is passed through weeds on-the-go through electrodes, thus destroying chlorophyll and in some cases wrecking the cell walls of the weed’s vascular system. The target species are affected immediately and desiccate within hours. Electroherb was developed by Zasso Group AG of Switzerland and received global recognition for innovation at the Paris SIMA conference in 2019.

The use of electrical current, like the broad-spectrum herbicides it is being developed to replace, affects only the plants treated, and kills the affected plant to the root — without chemical toxicity, residues or the development of weed resistance.

Interest in the system has been high in Europe because of increasingly-stringent crop protection chemical regulations and steadily increasing numbers of chemical-resistant weeds. Industry watchers say more than 250 weed species in more than 90 crops in 70 countries show herbicide resistance, while the last new mode of action herbicide is more than 20 years old.

In late October, CNH became a minority stakeholder in Zasso and plans to offer the technology through its AgExtend startup accelerator business. Case IH engineers were instrumental in developing the technology, branded XPower, which uses a front-mounted set of electrodes to apply high-current electricity to target species and a ground electrode to complete the circuit. A rear-mounted diesel-powered generator supplies the current for the process.

Developers say the system can be used throughout the season on short and tall species with no registration regulations, it is “eco-friendly” because it doesn’t disturb the soil, doesn’t affect beneficial insects and other species and presents no run-off problems. In addition, electro-weeding can be done with field speeds up to three times faster than field cultivation.

Case IH product marketing manager Maxime Rocaboy says the technology has proven at least as effective as chemical herbicides in European studies, and is more energy efficient and crop-safe than mechanical weeding. 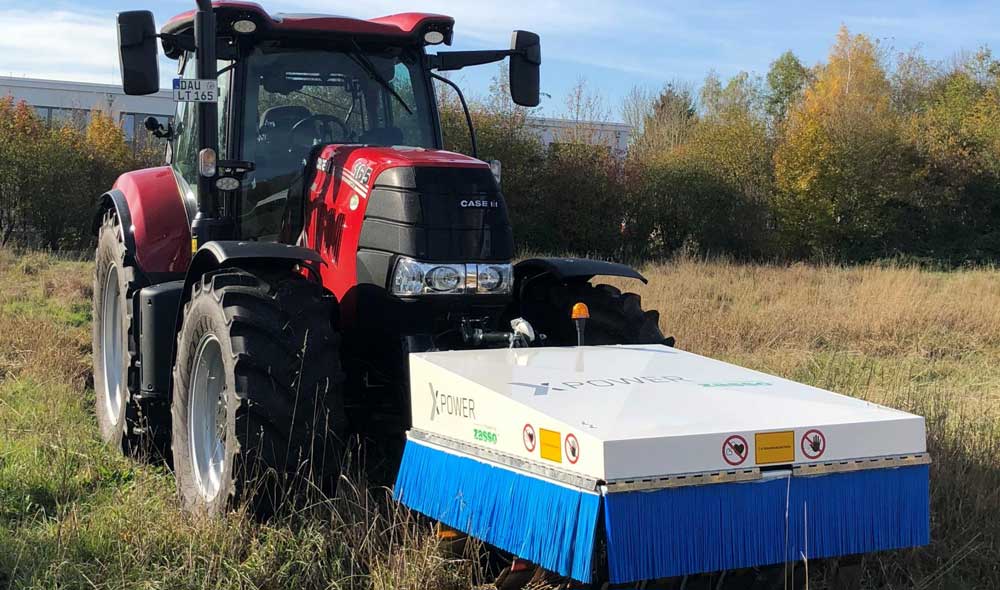 CNH XPower electo-weeding will be available through CNH’s AGEXTEND dealership network in the near future. Case IH was closely involved in the development of the tractor-mounted generator and electrode system that passes current through targeted weeds, altering chlorophyll and destroying vascular tissue.

The XPower system has an operating width range from 48-120 inches and uses on-board sensors and camera-based guidance to apply electrical current to in-row and adjacent weeds.

“At the same time, it is more practical, safer and cheaper than scorching or burning systems used for in-field weed control,” he adds.

In Germany, Crop.Zone has added the use of an EU-registered and “organic friendly” conductive-enhancing solution of humic products, sugars, bio-char and oil esters to pre-treat weed species before passing electrodes over them. The company says the liquid, sold under the name of Hybrid Herbicide, helps improve electron flow through the plant by coating the stems and penetrating leaf stoma to provide extensive surface area for the electro-weeding process.

Germany’s Crop.Zone is introducing its electro-weeding system in the EU this year, and combines electrical current with a proprietary conductive-enhancing solution dubbed Hybrid Herbicide to improve weed-killing electrical charges.

The Hybrid Herbicide along with Crop.Zone’s electro weeding applicators and low-voltage tractor-mounted electro-shock equipment will be introduced in Germany, the Netherlands, Belgium and Luxembourg during the 2021 growing season. Initial uses this year will concentrate on pre-plant field treatments, potato crop desiccation and post-harvest weed management.

Crop.Zone officials say the company is also cooperating in the EU effort with Australia’s crop-protection and specialty seed company, NuFarm. The agreement likely will also spread the technology throughout NuFarm’s global market area.