Under 40 Horsepower Tractors — Retail sales for this category exceeded our monthly forecast and is currently 3.3% above our year-to-date forecast. 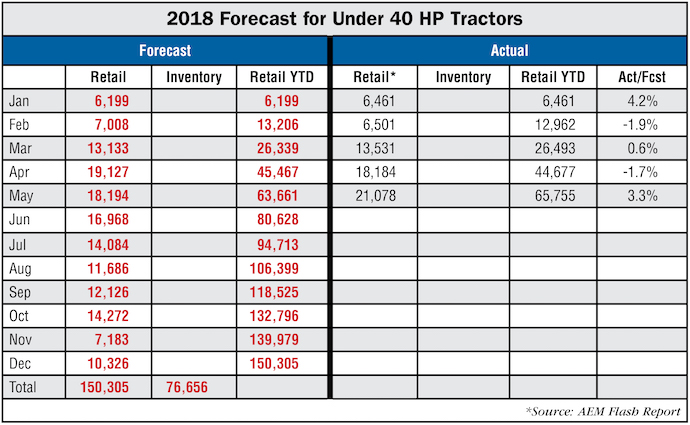 40 to 99 Horsepower Tractors — Another good month for this category with the actual monthly results above our forecast and year-to-date by 4.4%. 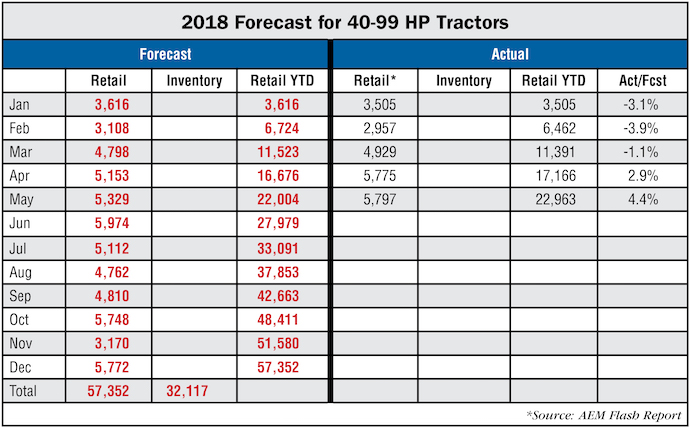 100 + Horsepower Tractors — This has been the weak link in the tractor market but has shown some great improvement as the year progresses. The year-to-date actual total is currently –2.6% of our forecasted volume. 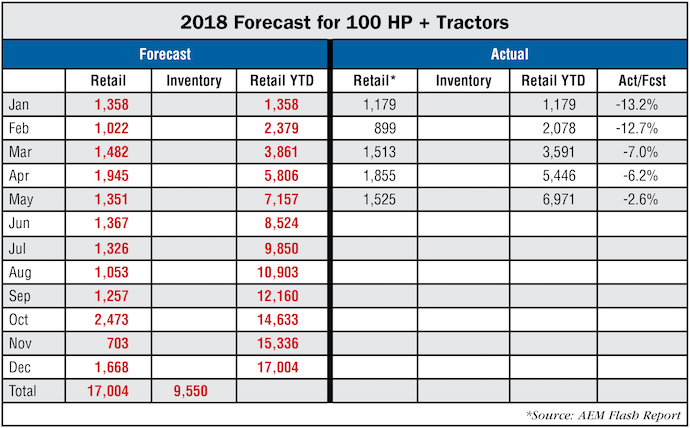 4 WD Tractors — This category has shown constant improvement since the beginning of the year and is closing in on our forecast. The year-to-date total is –6.1% below our forecasted level. 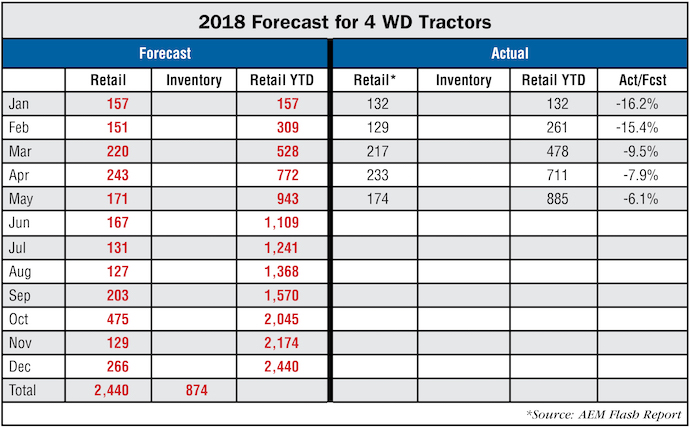 Combines — The past 2 months have been amazing and the year-to-date actual result is a whopping 24% above our forecast.

Impending Doom or a Bright Future?

There is a ripple of fear making its way across rural America that seemed to be brought about by the Trump administration’s firm conviction that the U.S. should no longer act as if the U.S. is a rich man’s son who is attempting to buy friendships. The strength of the U.S. economy has provided the engine to rebuild enemies that we have defeated, new nations that were struggling to get their footing in the world and continued to provide a bright future for our own population. That economy is growing daily with more job openings than people applying for unemployment in May, even as the stock market reacts wildly as each new announcement hit the news wire.

The general U.S. economy is very strong and has propelled growth worldwide and there is substantial evidence to show that the U.S. agricultural economy is developing in a most positive manner. The “Rural Mainstreet Index,” published by Creighton University, reported in their May issue that the rural economy completed 4 months in a row above the growth neutral point in their monthly surveys and that is the first time since July 2015 that this has happened.

The Kansas City Federal Reserve has reported an increase in interest rates for new farm loans and a decline in demand for those loans in May, but they also indicated that farmers were restructuring debt at a smaller rate than in previous years. This is the fifth year in a row that net farm income has declined annually along with lower value for farm real estate. Banks within the 10th District have increased their collateral demands as farmers’ income has declined.

The Purdue/CME Group Ag Barometer indicated strength in the agricultural economy in their May survey results as farmers showed growing confidence in both their current position and their anticipated future position. Those farmers who expected to be in stronger financial conditions a year from now rose by 7% over the April level and reached the highest percentage level since February 2017.

In spite of the proposed tariffs from the U.S. and China, commodity prices held firm in May helping to provide some additional income for corn producers when it was needed the most.  On-farm storage of grain continued to make up a large part of the U.S. grain reserves and many of those farmers have been anxiously watching for prices to rise before selling part of their stocks.

Our models have indicated that 2018 would be a year of base building in many of the tractor categories as farmers kept an eye on the markets around the world. The weakest category presently is the 100-plus horsepower group and the buyers for these tractors are principally grain farmers who have been impacted by the falling net farm income over the past 5 years.  Steady commodity prices in the face of tariffs from both sides gives promise that things are beginning to turn for the better.

This does not mean that there will be a sudden increase in tractor sales in the coming months as many of the manufacturers would be unable to react to a large influx of additional orders this year. There are always one or two critical items that will have long lead times that will prevent a large increase in delivery in 2018.

It does mean that the agricultural economy is following a historic pattern of trailing the general economy by about 18 months. With strong quarterly earnings being reported across the nation, there is every indication that the economy will remain strong through 2020 and beyond. This indicates an increasingly improving farm economy beginning in 2019 and continuing for several years. That is in line with our original forecast which suggested that 2018 would be flat to slightly higher than 2017 and that 2019 would begin to see some modest growth in equipment sales activity.

The month of May was marked by threats of tariffs and retaliation to those threats, filling the air with great concern among farmers. China effectively stopped buying U.S. soybeans and grain sorghum last month, but other markets opened up to help relieve the pain. Just when Brazil appeared ready to take over the market, the trucker strike in that country practically brought it to a standstill although grain elevators at the ports had enough grain on hand to fill current orders. In spite of all of this, U.S. commodity prices remained rather steady throughout the month. Corn prices are inching closer to the breakeven point for many farmers and soybeans continue to remain in a profitable range.

Soybeans — The soybean markets suffered a larger decline with the July contract closing down about $0.30 per bushel at $10.18. The August contract fell to $10.23 while the September contract closed at $10.27 per bushel.

Our industry is navigating some very choppy waters as international trade negotiations continue. Uncertainty has created caution in farmers’ spending recently and most likely will continue until there is some resolution to the trade talks now underway. The U.S. balance of trade has always been in favor of our trading partners and as the current administration attempts to bring the trade level to a more favorable position, there is consternation among our trading partners and the administration’s political adversaries.

In the meantime, farmers are sitting on the sidelines watching the ball bounce from court to court. Based on the results of the various surveys conducted by those watching the U.S. agricultural industry, farmers are of the opinion that we have the upper hand.