Home / Blogs / Opinions & Columns / Is Your Dealership Ready for Growing Use of Cover Crops?

Is Your Dealership Ready for Growing Use of Cover Crops? 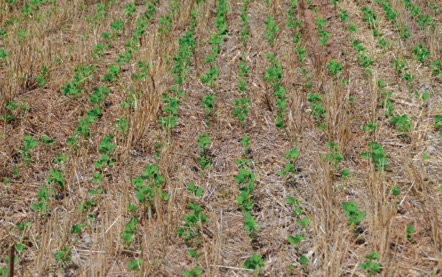 While the use of cover crops is not new, interest in the benefits they can produce is growing. U.S. farmers are on track to plant cover crops in their normal rotations to the tune of more than 20 million acres by 2020. The interest in keeping something growing on fields year round is rooted in farmers’ search for increased yields, better management of natural rainfall, reduced soil erosion, boosting soil organic matter and better overall “soil health.”

The trend really began in the Upper Mississippi River Watershed with the drought of 2012, when fields covered with small grains and other plants retained sufficient moisture during the blistering, dry summer to provide 11 bushels per acre corn yield increases over fields without a cover. Soybeans, too, showed yield advantages that year when planted into cover crops.

Overall, statistics concerning the impact of the 2012 drought on crop yields in Nebraska, Kansas, South Dakota, Missouri, Iowa, Illinois and Indiana showed the use of cover crops boosted corn yields by 11% and soybean yields by 14.3%. Farmers across the U.S. responding to a survey concerning the use of cover crops that year, who had side-by-side field comparisons to report, said they saw a 9.6% increase in yields for corn planted into covers, and 11.6% soybean yield increases due to cover crop moisture retention.

Since that time, farmers reporting they have established a cover crop on their farms for the first time have jumped dramatically, says Missouri University’s Rob Myers, who works closely with the North Central SARE (Sustainable Agriculture Research and Education) program and the Conservation Technology Information Center (CTIC).

Growing interest in cover crops runs hand-in-hand with no-till farm management and crop rotations, and, as one might guess, the initial popularity of covers began in areas with regular and ample rainfall. West of the U.S. Highway 81 corridor, however, small grain stubble and terminated stands of wheat, rye and barley are helping irrigators reduce ground water pumping along the Ogallala Aquifer.

In the Southern Plains, where there is a cattle component, growers are seeding cover crops and paying for some of the establishment costs with limited grazing. In nearly all cases, proponents cite improved soil moisture and texture where cover crops are used. Those who have used them the longest will tell you a cover crop saves more moisture for cash crops in the long term than it costs in moisture to produce.

Information from SARE explains what a grower might expect from the first year of planting a cover crop with the following benefits: 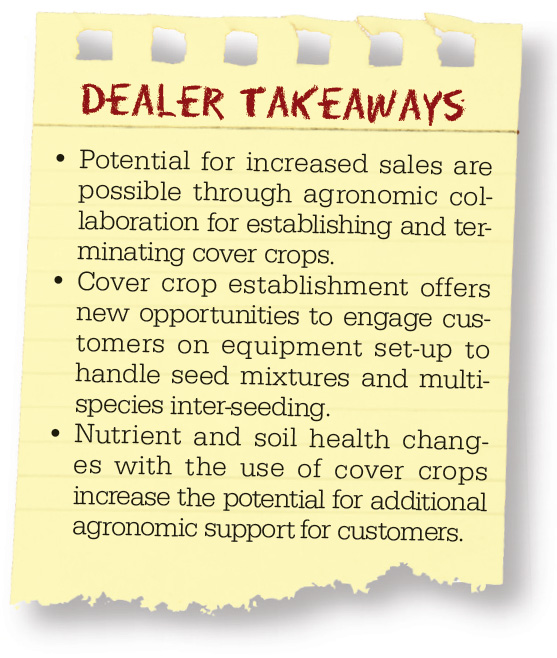 Longer term benefits according to CTIC and SARE include:

As part of the 2013-14 SARE/CTIC cover crop survey, respondents were asked how the ag retail community could help and benefit from actively planning to serve growers using cover crops. With nearly 60% responding, the suggestions included:

“The peas need to be planted deeper than other seeds and are tough to plant without splitting them with equipment designed for smaller seeds,” he explains. “So, we have some growers running row units set for peas and 7.5 inches over another unit operating much shallower with smaller seed species.”

How Are They Planted?

Data from the CTIC/SARE cover crop survey shows in 2013-14, 46% of the respondents reported drilling their cover crops, while 24% used broadcast methods with light cultivation. Another 12% broadcast cover crop seeds to the surface either during the cultivation stages of a cash crop or directly to fields behind harvesters. Fourteen percent hired aerial applicators to seed their cover crops, and only 3% reported planting with a corn or soybean planter. Those planting with liquid manure accounted for only 1% of those reporting.

What is ‘Soil Health?’

Today’s public conversation is full of buzzwords and catch phrases that are nebulous at best but when studied for specific meaning, fall far short of precision. Because we’ve used the phrase “soil health” several times in this article, we want you to know it does have a specific, measurable meaning.

“Soil Health” as it applies to cover crop benefits is measured by a process developed by Rick Haney of USDA’s Blacklands Agricultural Research Service station in Temple, Texas.

The process analyzes soil and takes into account the relationship of microbial activity to the amount of soil organic carbon and nitrogen. This system renders a soil health calculation ranging from 0 to greater than 50, with a higher number indicating better “soil health.”

In the first several years of USDA’s study of cover crops from 7 research areas distributed across the U.S., soil health scores showed a slight increase within the first year or two of cover crop use as indicated by higher biological assessment values.

In most cases, the median seeding cost for a cover crop ran about $25 per acre, and about another $12 per acre in labor and equipment to contract out planting of the cover crop.

How Are They Terminated?

While cover crops add carbon to the soil and hold erosion at bay as they grow, most have to be terminated to make way for cash crops, which generates demand for several lines of goods and services from ag retailers looking to support the growing movement to covers.

Most proponents of cover crops say the benefits of keeping the ground covered and adding carbon to the soil throughout the year are great enough to pursue without financial incentives from government or conservation agencies. However, there are local grants and incentives to try the practice.

Also, USDA offers programs by which cover crops can be included in crop insurance plans and, through the USDA-NRCS, in some states there are special cover crop initiatives offered through the Environmental Quality Incentives Program (EQIP).

In the October/November issue, we’ll look at new and popular equipment used in establishing cover crops.