U.S. turkey consumption follows a strong seasonal pattern characterized by peaks in per capita consumption around the Thanksgiving holiday. Wholesale and retail prices tend to peak in the months preceding Thanksgiving followed by drops in price during November and December.  On an annual basis U.S. per capita turkey consumption has slowly declined during the last 5 years, while domestic production has been flat. In 2013, U.S. turkey prices have been down slightly compared to recent years and lower prices are forecast into 2014 due to declining feed costs. Even with lower prices, the gradual downward trend in per capita turkey consumption is expected to continue in the near term. 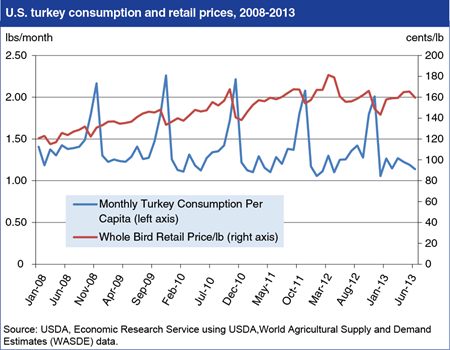