Deere Looks for a Slowdown in 2014; Still Better Than Many Expect

Deere & Co.’s earnings report surprised more than a few analysts, but many aren’t buying into the company’s forecast for the year ahead, though it’s lower than their fiscal 2013 results.

At the same time, in its outlook for fiscal year 2014, the company says it could see its first drop in annual earnings in 5 years, largely due to a declining ag equipment sales. In addition to falling commodity prices (Chicago corn futures down 50% since hitting a record high in August 2012), Deere also dropped its forecast in U.S. farm cash receipts for 2014 to $377.7 billion from $391.8 billion in 2013.

According to Fisher, Deere’s initial fiscal year 2014 implies a 6.7% decline vs. 2013 results. “Deer’s guidance reflects 2014 ag and turf equipment sales down 6%, including the sale of 60% of JD Landscapes, and assumes a 5-10% decline in the North American ag industry sales, driven by declining high horsepower tractor and combine sales. Deere also expects EU industry sales down about 5% and South America down 5-10% in 2014. The ag decline is partially offset by an expected 10% increase in construction and forestry sales.”

But Fisher says the company’s outlook may be optimistic. “Net income guidance is above the Street and UBS estimates, but we believe it may represent a best-case scenario. We estimate North American ag equipment sales to decline 10%, and given recent channel checks with key farmers/bankers/insurers/dealers, we believe a 10% decline may prove optimistic.”

RW Baird’s Mircea (Mig) Dobre also sees strong headwinds ahead for ag equipment sales in 2014. In a note, he said, Deere’s beat of analyst estimates was driven by strong margin performance. “2014 guidance was better than most feared, with core sales flat (ag and turf down 2%) and net income down mid-single-digits. Pricing is expected to contribute +2%, which could prove difficult to achieve given expected volume declines in ag. Declining commodity prices and crop receipts — now for the second year in a row — combined with a relatively young equipment fleet underline the risks to our forecast and management’s guidance.”

The following data from Deere’s conference call with analysts shows the basis for the company’s 2014 outlook. 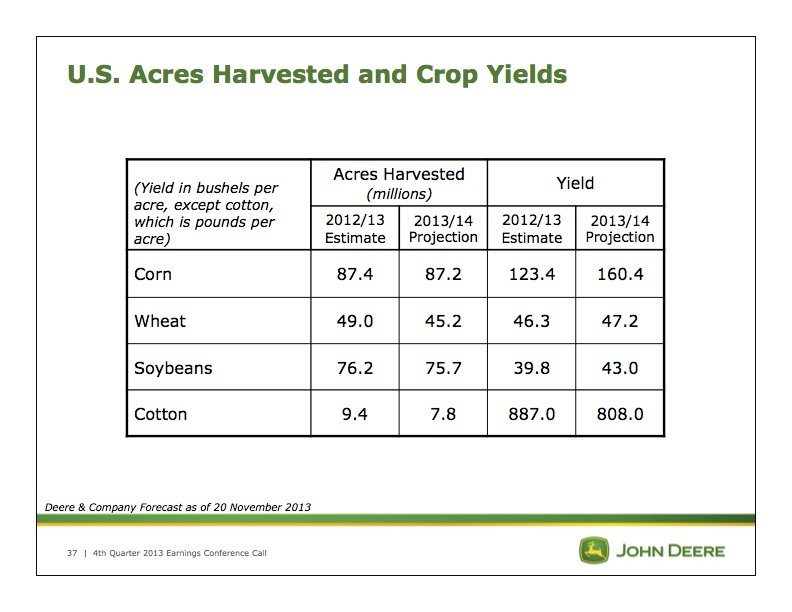 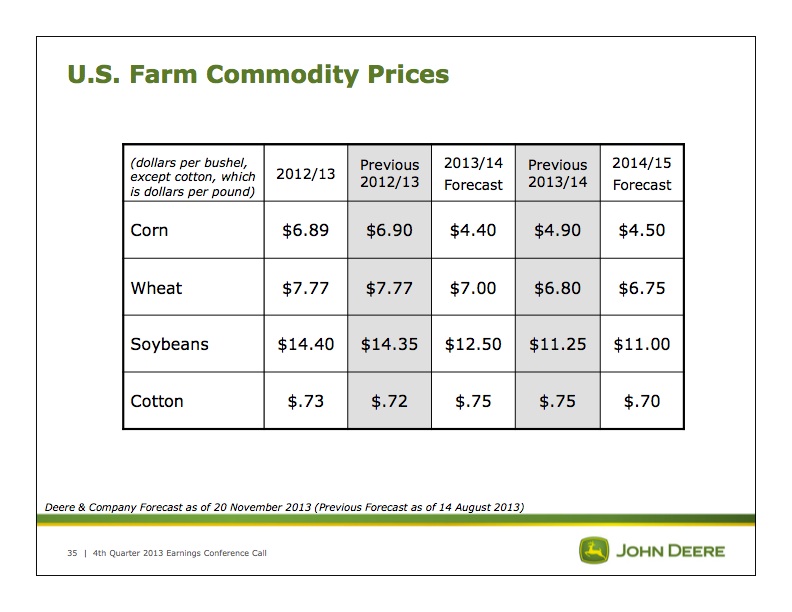 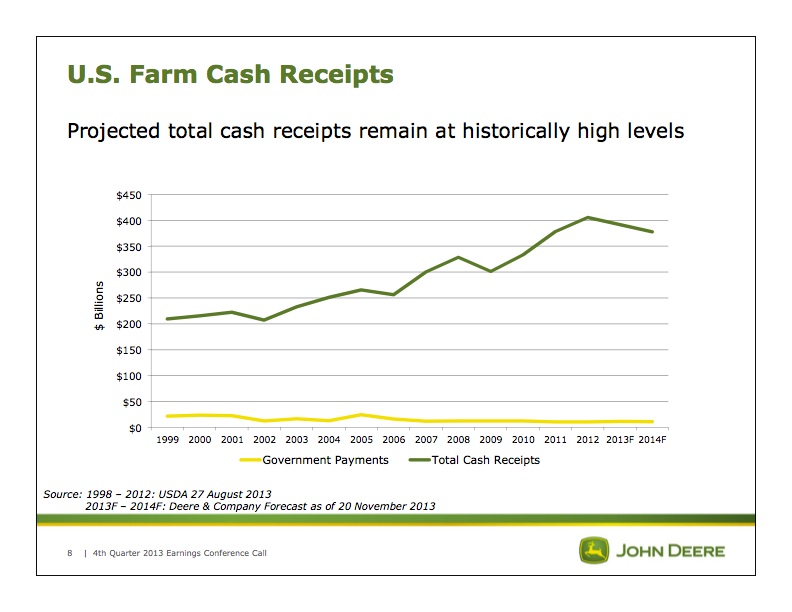 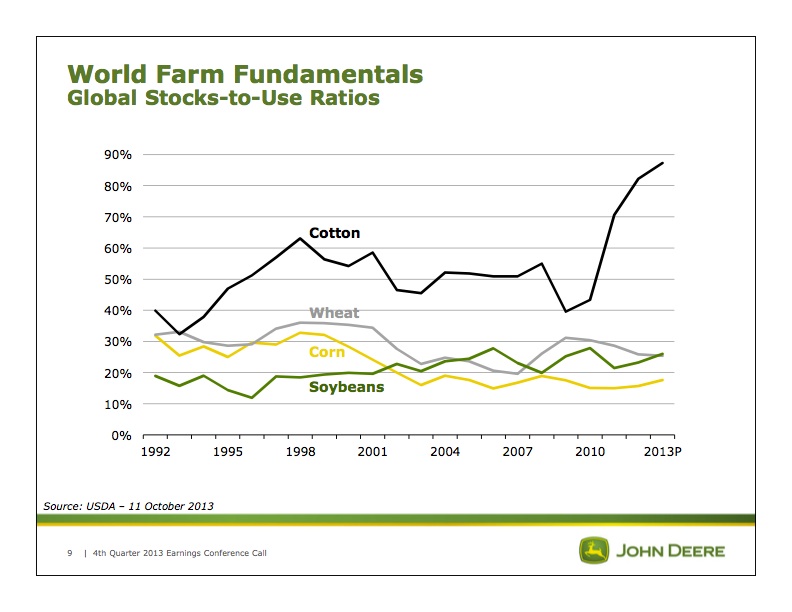 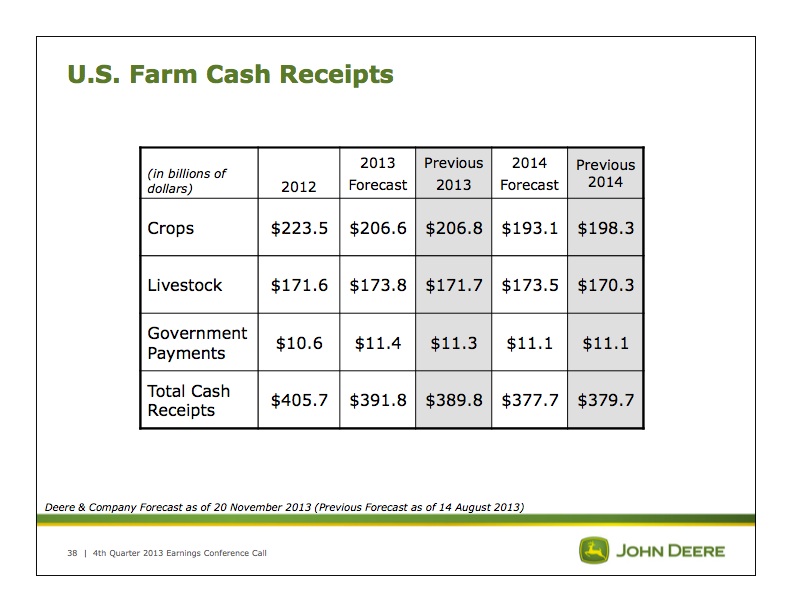 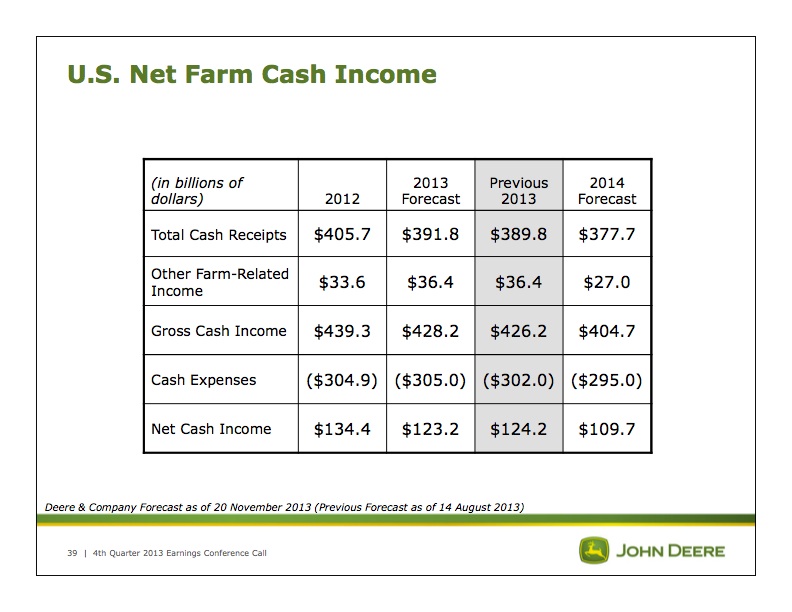 Equipment Sales Could Hold Up Better Than Some Expect

Deere's Sales & Inventory Better Than Rest of Industry in September