Nathan Rowings, Apache AS710 owner, has a unique way of showing his appreciation for his sprayer. He started building an identical model of his Apache sprayer. After four years of intense detailed work, he brought his finished product to be placed on display at the National Toy Truck ‘N Construction Show in Indianapolis. 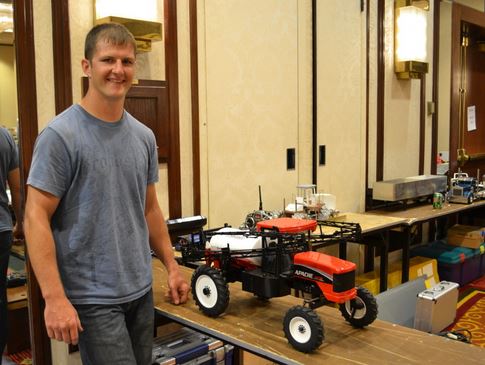 “When I was younger, I used to make other models for 4-H projects,” said the Greencastle, Ind. farmer. “But I got bored with them, and one day I decided I wanted to make a model of my Apache.”

Down to the small details, Rowings has created a nearly identical sprayer to the Apache. He even incorporated the same decals on his model AS710 that are found on the real sprayer. This little Apache not only looks impressive, but it is functional too.

“The sprayer’s lights work, and the nozzles on the boom spray water,” Rowings added. “They actually spray in a fan pattern and not just straight down.”

Rowings spent approximately 400 hours making this model and even had to order parts from other countries. His mini-Apache is a 1:10 scale version of a real Apache sprayer and weighs 25 pounds. The AS710 model is hydraulically-powered by a remote control.

Rowings has attended the National Toy Truck ‘N Construction Show for several years, but this was his first year to display his sprayer.

Indianapolis has hosted the show for the last 23 years. People from all over the country come to display their models or attend as a spectator.

Check out this blog post by Equipment Technologies from last year, “Apache owner building remote control AS710 model,” to see Rowing’s model while it was under construction.