The K-Line Speedtiller is a highly effective disc-tilling machine ideal for soil conditioning in the presence of high levels of crop residues. With a full soil disturbance, trash is cut and distributed evenly providing a protective barrier to retain moisture. 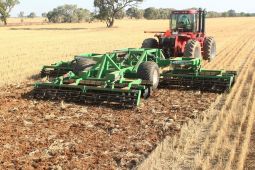 The K-Line Speedtiller operates best at high speeds, giving a fuel-efficient operation and allowing stubble residues to pass easily through tined seeders. A depth-gauging roller is provided at the rear giving the desired crumbling effect on the soil profile and excellent seedbed preparation.

The Speedtiller has become extremely popular in recent years. This is due to the high amounts of summer rain, coupled with higher yields. This has caused excessive levels of residue, needing to be chopped up and incorporated so your seeder can sow without choking and blockages.

Along with wet summers have come weeds such as fleabane and umbrella grass, which have proved hard to control. The Speedtiller has found its niche in killing these weeds without having to work to the depths of conventional plowing systems.

Farmers have also proven the benefits of bringing some tillage back in to their cropping systems; not only for residue and weed control, but also to level out paddocks that have developed wheel ruts over time.

The Speedtiller is heavy duty and has the ability to work the soil and condition it into a seed bed (in most paddocks) in just one pass, compared to conventional systems taking anywhere up to three passes.