Art's Way Manufacturing Co. Inc. (NASDAQ: ARTW), a leading manufacturer and distributor of agricultural machinery, equipment and services is pleased to announce its financial results for the three and six months ended May 31, 2013. Financial Highlights For the Period Ended May 31, 2013: 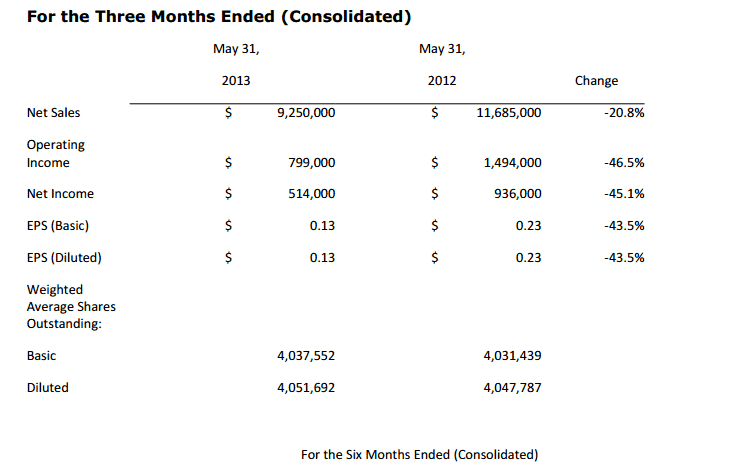 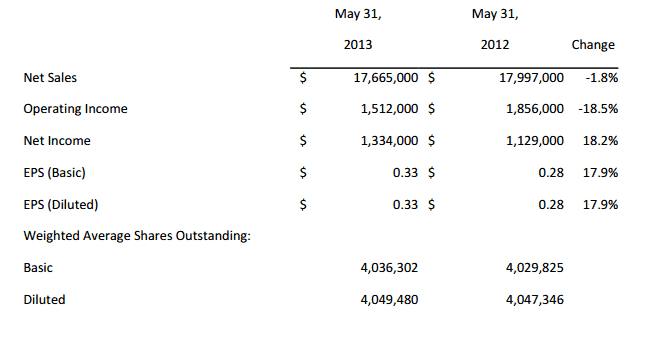 Scientific: Our second fiscal quarter sales at Scientific were $892,000, compared to $3,062,000 for the same period in fiscal 2012, a decrease of $2,170,000, or (70.9%). Year-to-date sales were$1,909,000, compared to $5,057,000 for the six-month period ended May 31, 2012, a decrease of $3,148,000, or (62.3%). The decrease was primarily attributable to the completion of an approximately $7 million fabrication and delivery contract executed in January 2012 and an approximately $1.7 million installation contract executed in April 2012. Scientific was hired to design, fabricate, and install twenty-four modular units over the course of approximately one year for one of the world's leading research and teaching institutions. Most of the revenue for the contract was recognized during 2012. Scientific uses percent complete accounting to calculate revenue and gross margins for all contracts. Gross margin for the quarter ended May 31, 2013 was 50.3% compared to 21.3% for the same period in 2012. Year-to-date gross margin was 47.4% in 2013 compared to 22.2% in 2012. The gross margin increase was due to the finalization of costs as compared to estimates and miscellaneous reductions in expenses. The team worked hard to control costs as the 2012 fabrication and installation projects were finalized.

Income: Consolidated net income was $514,000 and $1,334,000 for the three-and six-months ended May 31, 2013, compared to $936,000 and $1,129,000 for the same respective periods in 2012. The changes to net income for the six month period were primarily attributable to the timing in net sales, offset by the first fiscal quarter net gain realized from the sale of certain land near Armstrong, Iowa.

J. Ward McConnell Jr., Chairman of the Board of Directors said, "The three and six months quarterly financial results are not as robust as we would like due to the cyclicality of our business and the timing of key beet harvester sales being primarily in June. Growth at times can be somewhat uneven. As expected, Scientific is down after a record year, but the Scientific team is taking an aggressive marketing and sales approach and has signed two new contacts that have recently been announced by the Company. Additionally, we have launched a national marketing and advertising campaign to the hog industry with our hog care AG buildings to define the Art's Way brand more clearly, expand market awareness and grow our customer base. We also totally revamped the Art's Way Scientific web site to be more dynamic with expanded product information, updated features and photos, http://www.buildingsforscience.com. The early responses have been extremely positive and we intend to make similar efforts in connection with our anticipated expansion into the dairy business."

"We expect the Company to grow with additional product offerings and expansion into new markets and we believe that our future is very bright. We believe that our targeted agricultural niche products present profitable opportunities and that the agricultural sector remains an attractive investment due to near-record incomes expected this year on the farm. We have positioned Art's Way with our accretive acquisitions to be a growth company with diverse product lines and markets in order to deliver a growth rate on revenue that is above average for our industry."

"A key focus of the management team is to drive new sales by enhancing our relationships with current customers, and strengthening our sales efforts for both Art's Way Manufacturing niche farm products and Art's Way Scientific AG care buildings while maintaining a keen eye toward expense reduction. We are optimistic the expansion of our brands in Japan and in Canada and the sound execution of our business strategies will continue to drive long-term growth and stockholder value. We remain confident our customer-focused, diversified business model will help us manage through these periods of slower growth." "Company-wide, we are committed to delivering outstanding results including superior quality products, unmatched customer service and increased shareholder value."

For more information, including an archived version of the conference

Art's Way Manufacturing Announces 13.1% Increase in Operating Income Over the Third Quarter of 2010