By Mike Lessiter posted on June 9, 2013 | Posted in Manufacturer News

In addition to hearing what dealers are seeing, Farm Equipment wanted to hear what the dealership management consultants see.

The good news? These experts see good long-term positives for the industry, without a market fall anytime soon. The bad news? There’ll be big trouble in the industry if it does.

By many accounts, the dealer ecosystem is enjoying artificially high times because a stacking of cash has kept some in the business who should’ve otherwise exited. “There are some dealers in the industry who aren’t profitable for any reason other than they’re in a great market and maybe even had a nearby competitor go out,” says Floyd Jerkins, Jerkins Creative Consulting, Benton, Ill. “A lack of sophistication is causing them to leave 2-3 points on the bottom. A lot of dealers are making money not because of how they’re managing the business, but because the doors are swinging open right now.”

John Spader, Spader Business Management, Sioux Falls, S.D., adds that the overall industry has good-looking balance sheets and net worth statements. “A lot of dealers could lose a lot of money and still not go out of business,” he says. “So while the average dealer has done a pretty good job financially of being prepared for a downturn, that’s only half the job. Most are not at all ready on the people management side. It’s the people and culture part that will hurt the most.”

George Russell, Currie Management Consultants, Worcester, Mass., says the wild volatility of previous ag downturns isn’t likely to be repeated as the entire industry has gotten smarter. “In every cycle, people learn. Farmers are better positioned on debt and manufacturers got smarter, too. The dealers learned as they went through these cycles. The mid-1990s downturn wasn’t as deep or long in part because of the lingering memories of what happened in the 1970s and 1980s.” If the industry’s response to the 1970s recession earned a “D” grade, he says that grade improved to a “C” in the 1980s and a “B” in the 1990s.

“A lot of dealers are making money not because of how they’re managing the business, but because the doors are swinging open...”

But that doesn’t mean hubris isn’t a formidable foe, particularly with executives who haven’t yet experienced a real downturn. “People can say they understand it’s a cyclical business,” says Russell, “but until you’ve laid people off and worried how you’ll pay your electric bill, it’s tough to honestly say you’ll know what needs to be done.”

Second, there’s a more complex ownership structure today that impacts decisions and the speed at which they’re made. “You can have a great key owner who is on his game and gets it,” says Jerkins, “but struggles with the other stockholders who don’t.” And unlike earlier days, dealer-principals can’t touch everyone at a moment’s notice anymore; the multi-store organization makes shifting a business far more difficult.

“While the average dealer has done a pretty good job financially of being prepared for a downturn, most are not at all ready on the people management side...”

When trouble hits, Russell says the biggest area that will come to haunt dealers is their complacency with second-, third-and fourth-tier equipment buyers. Being close to these buyers is critical for two reasons, says Russell. First, they can be a great leading indicator of cycle change. For instance, when dealers see them opting to repair their machinery vs. buying good and fairly-priced used equipment, that can be an early signal. Second, he says, you’re going to need them for your trades.

Understanding Your Own ‘Dealership Economy’ Will Signal When Change is Coming

Some dealers have such good instincts they sense emerging business cycles — up or down — through observing daily transactions. Dealers should trust these instincts but super-charge them by linking them with excellent facts. Government agencies, economists and industry experts all supply facts, but they don’t give the whole story.

Your community has customers whose “early adapter” mentality makes them sensitive to major economic changes. Know and listen to them.

Don’t overlook your own dealership as a primary source of relevant data. Imagine your dealership as the only economy on earth. Every day this “dealership economy” either adds strength or weakness — it never stands still. Under these conditions what do you need to know to run an economy? Your dealership’s financial statements and subsidiary reports contain a set of Key Economic Indicators (KEIs). After all, the economic cycle that surrounds your dealership is what matters.

There are dozens of KEIs buried in your financial statements and subsidiary reports that indicate the next emerging business cycle. We start with 3 fundamental KEIs when instructing dealers or boards of directors:

1. Sold-Ahead Report. It sounds fundamental, but always plot, read, monitor and act on this report. Plotted and compared with other months and years, this report gives solid evidence of whether farmers are optimistic enough to invest into the future or not. Any cancellation in the sold-ahead status is a huge flag. Plot both dollars and units to take the skew out of inflation.

2. Days Sales in Inventory. If starting today, you receive no more complete goods inventory (new or used), how many days (at current sales rates) before you run out of inventory? The answer is a strong indicator of how customers (and possibly manufacturers) are seeing the future. The fewer days in inventory, the stronger your economy is becoming. If the days begin to increase, weakness is creeping in.

While these KEIs can be influenced by many other factors too, monitoring the trend-lines over several months and years become reliable.

The point is, don’t believe an economic cycle is developing just because an official report says so. Link such reports and your instincts with factual data from your customers and your own dealership economy.

That’s a problem as this group of buyers is not only contracting but also getting less attention from dealers. Russell explains: “Shops are staying busy with so much internal work that they aren’t out there seeking the repair business. Because repair work has a rule of thumb of $1 parts to $1 labor, internal work is less profitable. Dealers will need the higher profitability repair work in a downcycle.”

And as a result, dealers have become more “out of touch” with those secondary customers. “When things slow,” Russell says, “the dealer needs those customers for used sales and the aftermarket business.”

Spader agrees that service department profitability is an Achilles’ heel. “With the machines getting bigger and more complex, it’s sinful how little dealers are dropping to the bottom line in their service departments. There are dealers doing $8 million in labor sales with hardly any profit. It’s one area dealers have control over, and it’s a train wreck waiting to happen.”

Russell adds that another big vulnerability is the cost structure in the sales department. “When things slow down, the biggest variable is the cost of salespeople. Even with a commission structure, costs can’t go down as fast as they need to.” And even when it needs to happen, he says, dealers resist laying off salespeople.

What to Do About It

Jerkins says signals of a downturn must focus dealers to take a non-biased, non-emotional view from an operational, financial and HR standpoint. “Dealers used to send techs home when things went bad, and we all know how absolutely ludicrous that would be today. But just as ludicrous to a lot of dealers is laying off salespeople. But the first group of decisions must immediately impact the financial statement.

“In a cash-is-king business, it’s always best to run like your cash situation is under duress,” he says, noting that inventory turn ratios are going to need to increase from today’s levels as combine prices continue to escalate.

Where the smart money is, says Jerkins, is making decisions right now to avoid becoming hard decisions later. Also, he cautions dealers not to enact a step one without knowing what their step two will be. He advises dealers to do scenario pro-formas so they know what to do should a given situation materialize.

Spader advises dealers to do “stress tests.” He says, “Consider that you walk into your dealership and 40% of your gross profit is gone. What are you going to do now?” 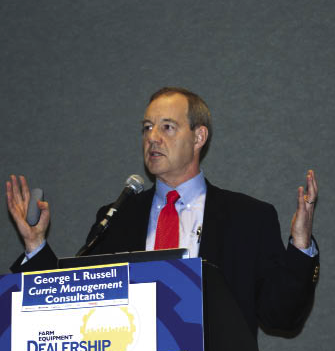 “Until you’ve laid people off and worried how you’ll pay your electric bill, it’s tough to honestly say you’ll know what needs to be done...”

While it all sounds like common sense, says Jerkins, it is not common practice. It’s easy for dealers to consume themselves with the doors swinging open and put off such worries for another day.

When asked about the survivors of previous downturns and what they did differently than those no longer with us, Russell gives a one-word answer: balance. “They were balanced on the sales of new and used equipment, focused on the A, B, C and D customers, and the parts and service business. The most successful dealers are always those with a balance of sales per a percentage of total income; they aren’t focused solely on wholegoods. That broader view is critical when downcycles come.”

Are You Prepared for the Worst?

Floyd Jerkins, Jerkins Creative Consulting, is less concerned with traditional drivers impacting the ag economy than he is with unplanned disasters or catastrophes, including terrorist acts and natural disas- ters like hurricanes. He advises dealer clients to answer questions like “What if something unforeseen stopped the engine for another 120 days and resulted in no access to capital? What if the entire grid of the east coast was knocked out? What would you do if something like that happened?”

While dealers of previous generations were slow to react for myriad reasons, Russell says a swift response is central to survivability. The advantage of one dealer over another may be the speed in decisionmaking, he says, adding that success is a function not only of information but also the ability to make that change. “An organization can have all the information, yet not have the ability to act on it.”

Beyond ensuring a balanced mix of income streams, he says top dealers know in detail what generates cash and where it’s being spent. He also adds that the best are preparing themselves by fully utilizing their CRM system to identify all customers (A, B, C and D) in their AOR.