To the Point: Stuck in the Middle...

By Mike Lessiter posted on June 9, 2013 | Posted in Manufacturer News 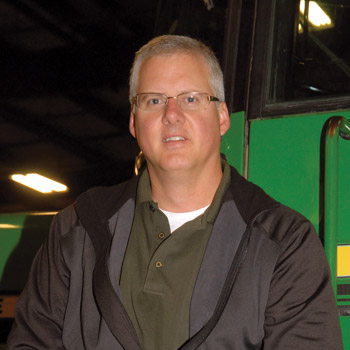 For our special management report on preparing for ag cycle changes, our staff’s research took us to dealers, economists and independent consultants. One interview was particularly fascinating as the conversation quickly veered to internal factors. More specifically, it was a declaration that no variable — not the weather, Farm Bill, interest rates, trade policies nor commodity prices — is of greater importance to dealers’ future than the things they directly control.

“People issues” are what dealers should be most concerned about, says John Spader, Spader Business Management. And after I met with a dealership’s leadership team yesterday, it’s clear that proficiency in soft-side areas (culture, personnel evaluation, development tools and organizational structures) may be the keys separating tomorrow’s winners and losers. This family-owned dealership, which you’ll read about next month, is investing significantly in its talent, and staking its growth opportunities on that investment paying off.

More sweeping than most commonly cited worries, says Spader, is the dearth of middle management in today’s dealerships. Ag’s bull run has only masked the consequences that a lack of bench development will bring. “The market is covering a lot of sins right now and a lot of tough decisions haven’t had to be made,” he says. “A whole generation in control in many dealerships has never lived through a downturn, nor realizes how bad nor fast it can turn.”

Middle management is every bit as important as the top. You need both to successfully navigate change, Spader says.

“When a downturn comes, the dealers lacking middle management talent are forced to adapt to all those changes while training their people at the same time,” he says. “That’s a double load and causes a lot of pain and agony.” Organizations simply can’t quickly adapt and function in times of change, he says, without capable middle management.

Solving the problem is easier said than done, but not something you can “luck” your way into. Not only must dealers train and develop, says Spader, but also “make sure the right people are in the right seat on the bus,” an area most dealers are lacking. Among the mistakes made is a confusion of leadership and management (“They are vastly different skills and only a very small percentage of people are both,” he says). Compounding that issue is that the bigger an operation grows, the narrower the required skills of each management position.

Spader advises clients to clearly define their desired organization structure, another area many dealers come up short. “There are only two models that work,” he explains, describing the function-driven model (centralized reporting by function to a regional manager) and the store-driven model (general manager responsible for entire store performance). “You’ve got to pick one; blending them is a total mistake. A blend brings only mediocre results at best while creating a mess that chews up the good people in your company.”

We’re in an interesting evolution, for sure. Thousands in our business succeeded on ambition and hard work alone, traits that by themselves cannot bring success today. Then we “leaned up” and got used to higher productivity thanks to technology, but then the business’ size and scope grew dramatically and added pressure everywhere. And we got older. And, while there’s a lot of smart and capable talent available to us today, the ranks of those aspiring to shot-calling responsibilities someday seems to have shrunk.

As Spader notes, as the business gets more complex, and with bigger machinery, the harder it is to shift gears. Detailing your org chart, along with talent scouting and development plans, could be your most important action items this year.