CNH Global N.V. today announced financial results for the quarter ended March 31, 2013. Net sales for the quarter increased 1% (3% on a constant currency basis) to $4.7 billion. Equipment Operations posted an operating profit of $443 million or 9.4% of net sales for the quarter, as increased volumes and positive net pricing in the agricultural segment compensated for the reduction in volume in the construction segment, higher selling general and administrative expenditures and research and development expense. The 31% effective tax rate for the quarter is within the Group’s full year 2013 forecast range of 31% to 34%.

Equipment Operations used $146 million in cash in the quarter, a 71% improvement from the first quarter of 2012. This improvement is a result of the increase in earnings for the period coupled with a reduced working capital build compared to the prior year. Capital expenditures totaled $84 million, as the Company continues to implement its strategic plan of investments in new manufacturing sites. Capital expenditures for new product launches (inclusive of interim and final Tier 4 emission compliant equipment) represented 30% of the total CAPEX in the quarter. CNH's Equipment Operations ended the period with a net cash position of $2.7 billion.

Net income, before restructuring and exceptional items, was $326 million for the quarter, an increase of 21%, driven by continued solid market conditions in the agricultural sector, satisfactory industrial performance, and improved results by the Group’s financial services business. This resulted in the Group generating diluted earnings per share of $1.33 (before restructuring and exceptional items), up 20% compared to $1.11 per share for the first quarter of 2012.

CNH Guidance For The Full Year 2013

Worldwide agricultural equipment market share performance was in line with the market in tractors and up in combines, despite a reduction in the APAC region for both categories and in the North American combine market where, as anticipated at the end of 2012, the Company’s revenues were negatively impacted by the changeover in manufacturing required to transition to a new flagship model.

CNH worldwide production of agricultural equipment was 19% above retail sales in the quarter as the Company increased inventory levels to accommodate the spring and summer selling seasons and the launch of the new combine in North America.

Case IH expanded its Farmall utility tractor offering in North America and Europe with models that meet the demand for rugged, yet comfortable and easy-to-operate equipment that is reliable and cost-effective. Case IH also presented the completely redesigned Precision Disk single-disk air drills, which deliver best-in-class seed placement accuracy for a wide array of crops. The Precision Disk 500T series includes a new smaller 25-foot working width model for smaller farms. In Europe and Australia, Case IH unveiled new features on its Axial- Flow combine lineup, including a redesigned cab – already recognized as the largest and quietest in the industry – and a folding auger with an industry-exclusive pivoting spout option. Case IH presented its new LB large square baler series to the European market at the 2013 SIMA fair in Paris and was also introduced in Australia. Both launches follow the baler series’ premiere in North America in late 2012.

The Case IH Robo-Sharpener – the first manually supervised “field-service robot” for sharpening wavy or regular tillage blades on the company’s True-Tandem 330 Turbo – received a Silver Innovation award from the American Society of Agricultural and Biological Engineers (ASABE) at the Ag Connect Expo.

In North America, the multi-award winning BigBaler large square baler, recently launched in Australia and Turkey, was recognized with the prestigious Good Design award for its innovative styling. The tracked version of T9 4WD tractor was honored with the FinOvation award by Farm Industry News.

CNH’s construction equipment first quarter net sales decreased 26% (24% on a constant currency basis ) as industry unit demand slowed in every region with light equipment down 8% and heavy down 23% in the quarter. As a result of the weak trading conditions in most major markets and in an effort to match inventory levels with forecasted demand, capacity utilization was reduced during the period. The reduction in revenue combined with lower fixed cost absorption in the period, resulted in an operating loss of $26 million for the quarter.

Case Construction Equipment introduced its new Tier 4A/Stage IIIB 521F wheel loader in the North American market, offering customers a 12 percent increase in fuel efficiency over the previous E Series model, while delivering faster acceleration and quicker cycle times. During the quarter, Case introduced in North America several Tier 4B/Stage IV emission requirement compliant models, including the Alpha Series skid steer loader, and the next generation of small double drum compaction units, which offer excellent maneuverability and visibility in a compact size, while maintaining the same control features found in heavy asphalt rollers. In Europe, Case Construction Equipment is once again taking the lead in emissions standards with the presentation in March of two Tier 4B/Stage IV midi excavators: the short radius CX75 SR and the conventional CX80C. Case Construction Equipment presented the new F Series wheel loaders and B Series motor graders for the Indian market at the February Bauma Conexpo (bC India) show in Mumbai. Case also introduced the upgraded version of its locally built Case 752 vibratory tandem compactor to further consolidate its market leadership in this segment. In Europe, Southeast Asia, China and the CIS, Case completed the introduction of the 8WX Series wheeled excavators equipped with a three-pump hydraulic system with a dedicated swing pump, a new engine speed/working mode selection dial, a heavy-duty undercarriage and an improved cab.

New Holland Construction began presenting its lineup of Tier 4B/Stage IV emission compliant equipment to the markets with the launch of four new models of its 200 Series skid steer loader in North America, and two models of its E Series midi excavator in Europe. New Holland also completed the introduction of its new crawler excavator range in Europe with three Tier 4A/Stage IIIB compliant short radius models, which feature the patented “integrated Noise and Dust reduction” system. It also presented, in the CIS and Southeast Asia, its new B Series PRO wheeled excavators which feature excellent productivity, heavy lifting and high precision performance. New Holland upgraded its grader offering in Europe with a new low profile cab that eliminates transport limitations when on a flatbed truck.

First quarter net income attributable to Financial Services increased 23% to $90 million compared with $73 million in the first quarter of 2012. Increased results were primarily due to a higher average portfolio and a lower provision for credit losses.

First quarter net income attributable to CNH Capital was up 11% primarily due to a higher average portfolio, stronger financial margins and a lower provision for income taxes, partially offset by a higher provision for credit losses.

First quarter results for the Group's unconsolidated Equipment Operations subsidiaries were $17 million, down $2 million from the comparable period of 2012. 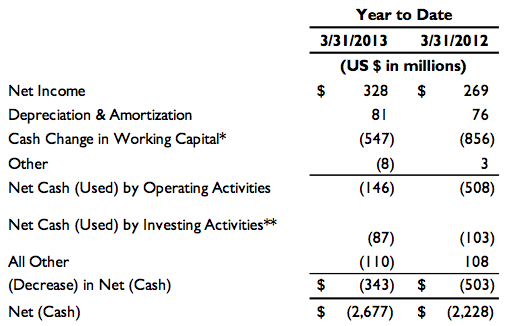 * Net cash change in receivables, inventories and payables including inter-segment receivables and payables. ** Excluding Net (Deposits In)/Withdrawals from Fiat Industrial Cash Management Systems, as they are a part of Net (Cash).

CNH management will hold a conference call on April 30, 2013, to review first quarter 2013 results. The conference call webcast will begin at 8:30 a.m. U.S. Central Time (9:30 a.m. U.S. Eastern Time). This call can be accessed through the investor information section of the company's website at www.cnh.com and will be transmitted by CCBN.