By Mike Lessiter posted on January 1, 2013 | Posted in Manufacturer News

Still connected to the industry through his work on the Titan Machinery board, Jim Irwin helped navigate some of the biggest ‘sea changes’ dealers faced in the last half century.

“The biggest difference in today’s industry vs. 40-50 years ago is the consolidation that changed the industry. Back then, the dealer owner-operator was a ‘jack of all trades.’ They were involved in everything and while they may not have been experts, some knew enough to be dangerous in every area.

Career: Started in the IH Omaha Warehouse in 1964. After retail training at a company store in Tekamah, Neb., other stints included store positions in Grand Forks, N.D., Danville, Ill., and territory manager in Nebraska (oversaw a territory of 13 dealers where there are now 3) and various sales and marketing jobs throughout the Midwest. He became manager of the Minneapolis region in ‘92, and moved to Racine as part of Case IH in ‘94, retiring as VP of North American Business in 2005. Oversaw 2,000 dealers at its peak. Currently serves as the lead independent director on the board of Titan Machinery Inc., West Fargo, N.D.

Predicted: Dealer consolidation trend, but predicted a faster rate than what has transpired.

Did Not See Coming: Sheer size and value of machinery that would become normal in the industry. Had not foreseen dealer groups setting up international locations.

Quotables: “My job was to keep one hand on the throttle and one foot on the brake.” … “Retail is detail. If you handle all the details, everything else becomes a lot clearer.”

“Today, it’s a totally different world. Dealerships have CEOs, CFOs, COOs, and staffs with management that also includes shareholders and bankers — so much more is on their plate. They need focused, expert specialists in just about every department.

“That’s why I’m a firm believer in dealer consolidation — it takes a lot of the risk away. We aren’t going to see $7 corn and $15 soybeans forever, and interest rates won’t stay this low. So it’s been easy to avoid mistakes. But when the picture changes and affects capital needs, mistakes will be very costly. There’s still risk in this business, and there’s a lot more for the single operation. If you’re part of a larger organization, you can spread some of it around.

“Could yesterday’s ‘Renaissance Men’ compete in this era of specialization? Yes, and there are some excellent two-, three- and four-generation families who are still very successful. But they’ve adapted — they aren’t running stores the same way they did 40 years ago.”

OEM-Dealer Relations: Who is the Customer?

“The question of who the real customer is has been argued about in the industry for years. To me, the dealer always has been the customer. The check doesn’t come from the farmer, it comes from the dealer. If the equipment isn’t sold retail when that due date hits, it’s the dealer that pays for it. We both have a common customer: the farmer. I always said the dealer and the manufacturer are connected at the hip — that’s where the pocketbook is.

“Were major-dealer relations better in other eras? It ebbs and flows based on the changes a company implements. Everybody gets their chance in the pool, so to speak. It can be good for a while and then there’s controversy over a policy or terms. For instance, we were one of the first companies to try to get the dealers to plan ahead on the preselling of product, which is achievable if you fulfill the delivery when it’s promised. Then, you can cut the terms back, but that’s very contentious for the dealer. I remember those conversations well. There’s an old saying that I still share with dealers who are upset with their supplier — ‘You give me your eyes and I’ll give you mine, and let’s see what we both see together.’ ”

- Managing a Tornado of Change for Dealers

“The basics of the dealer’s profitability picture is still the same. It all boils down to mix. The mix in the ag business is difficult because the three segments have vastly different gross margins — wholegoods 10%, parts 30% and service 60%.

“The most profitable dealers always maintain the right mix. I put together a document about 10 years ago that outlined that the most successful dealers in the future would have a high mix of parts and service gross margins and a moderate level of wholegoods gross margins. They’d have a territory big enough to get decent market share and grow it, and could be very profitable at historical margin levels.

“I just dusted the report off and adjusted numbers for pricing and inflation and the same model holds up today. That $15 million dealership would be doing $23 million today and would be profitable with a high rate of return.

“In terms of revenue breakdown, I like 10% service, 25% parts and 65% wholegoods. Dealers have leaned too much toward the wholegoods side in recent years because commodity pricing is driving sales; it needs to balance out. The dealers who will get in trouble will be those getting out of whack on the wholegoods side. You want to do more with your high margin segments.”

Retired Case IH Vice President of North American Business Jim Irwin shares just two examples of how much the world changed during his 40 years in the business:

On Pricing: “When I was a zone manager in Nebraska in the 1960s, the company raised the price of a wheatland tractor from $6,200 to $6,400 and we thought we would never sell another one with that kind of price increase. You wouldn’t have been able to fathom today’s tractor and combine prices.”

On Equipment Size: “When we were working on the early air planters, we got to a 6-row and thought maybe, maybe, we could sell someone an 8-row planter. We never could have conceived of a 48-row planter that would be so big it had to be serviced on the farm.”

“Back in the 1970s, we came up with a plan at IH to eliminate the volume bonus and lower the price of the equipment, by changing the trade discount. It lasted less than a year. At the time, dealers said, ‘Hold our money back, we don’t know how to manage it — just hold it and pay us at the end of the year.’ It was amazing. They basically told us they couldn’t manage the money with the lower price because they had a bad habit of dealing off the invoice instead of what the value of the product really was.

“Some day, this approach could make sense again as most dealers are sophisticated cash managers today.”

“The biggest opportunity for many dealers is organic growth, because of the consolidation, size of territory and infrastructure already in place. Dealers can grow organically without expanding the circle, so to speak. There’s vast, untapped opportunity in terms of nontraditional opportunities and I see more of it in the future. When crop prices and interest rates aren’t as favorable, these areas can fill the gaps. 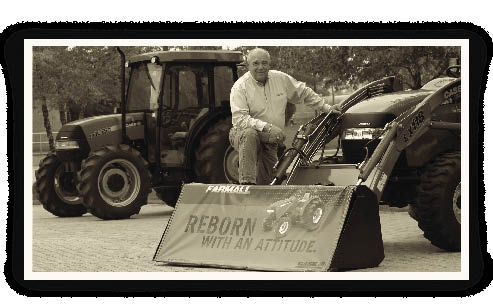 Among Jim Irwin’s proudest moments was the re-establishment of the International Harvester’s Farmall brand at a dealer meeting in Orlando in 2004. “Some in the new CNH organization didn’t know the true value or emotional attachment Farmall had, but the dealers did. There was hardly a dry eye in the house.”

“Take mobile service. With the bigger equipment, that work needs to be done on the farm. Not only is it more effective, and with a lot of potential for growth, but service vehicles are a lot less costly than brick and mortar.

“The opportunities can come from many different places. It’s about sitting down and understanding where customers spend their money, whether it’s in financial services, insurance, fuel, seed, fertilizer, consulting, crop marketing, precision ag data. Farmers realize they can find experts instead of doing it all themselves, and a dealership can provide some of that service directly or through partnerships.

“We saw it happen decades ago with the bulk oil strategy at IH. A lot of people said it wouldn’t work, but it has. If the customer has a good relationship with the dealer, he will consider consolidating his purchases.

“These farmers need to be sharp, they need to figure out ways to cut costs and maximize yield. And dealers are in a position to figure out a way to help them do both. Any business that answers both of those needs at the same time will be the winner.”

“What am I concerned about for my friends in this business? First, I’d urge all dealers to finalize a succession plan. Regardless of whether there’s a family member interested, dealers must figure out how they can get out of the business when they want to. The first dealer I put into business back in the 1960s was Curly Olney in McCook, Neb. A week or so after we had signed the contract, he said to me, ‘Irwin, now I want you to start figuring out how I get out of this thing.’

“I was stunned. He said he wanted to start planning today how he can turn over the business in 20 years if he wanted. He was planning for it from day one and he was very successful. He had a plan in place, he worked the plan and it worked for him.

“It’s just like estate planning and having a will or a trust. There’s not a lot of pain to it, but many people think it’s something down the road they don’t need to worry about. There are a lot of advantages to planning ahead.

“Second, dealers also need to keep their nose to the ground on the markets. I’ve seen markets drastically change and some dealers weren’t ready for it. Things like urbanization gobbling up farm land or pushing dairies out to different states, or crops moving into new areas, like soybeans into Cass County, N.D., that can dramatically change equipment markets.”

To The Point: Make Room for Creative Destruction