For the last 20 years Reynolds Farm Equipment Inc. in Fishers, Ind., has been spreading holiday spirit to the surrounding community with a spectacular holiday light show. The Christmas light display has become a well-known tradition throughout the area and beyond. Michael Lawson of Reynolds Farm Equipment says members of the family have run into people in places as far away as Hawaii who have seen or heard about the annual light display.

Lawson's grandparents, Mac and Arline Reynolds, started the farm equipment business selling John Deere machinery in 1955. He says Christmas has always been a big deal to the family. It's always been about family, about the community; it really has always been about the people, Lawson says. That attitude goes beyond the holidays though, and could be seen in how they ran the business and how their children and grandchildren run it today.

I say that with all sincerity because a lot of times Christmas and holidays and cheers is just another tag word or word that comes up for 30 days and then we're back to being ourselves, Lawson says. It really is everything to them [Mac and Arline] and it really has carried over into a lot of our family and a lot of our philosophy in business as well.

For the first time in 20 years, Reynolds nearly canceled the lights display, which started off with one old Model D tractor decorated with a string of lights in 1992. The area surrounding the dealership in Fishers is currently experiencing major road construction, Lawson explains, and the company wasn't sure if going ahead with the display would be a smart choice. The last thing we want to do is create anymore traffic problems and havoc for motorists. I'm not going to lie, during those 30 days or so that the lights are on, it's a lot of traffic issues for people, he says. 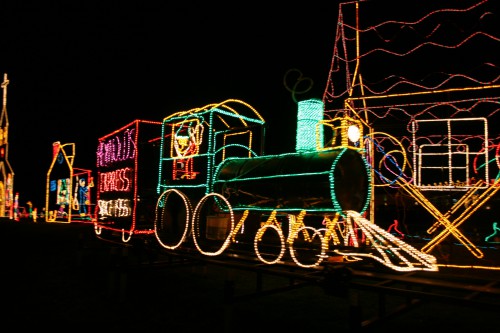 Despite major road construction in the area, Reynolds Farm Equipment in Fishers, Ind., will turn up the holiday spirit later this month with their annual light display.

Word got out that Reynolds was considering canceling the lights display for this year, and soon the story was picked up by the local CBS, Fox, NBC and ABC affiliates as well as the Indianapolis Star newspaper. Lawson says it wasn't long before the phone calls and emails started pouring in. Ninety-nine percent of the calls and emails were so humbling to me that it was like, wow this is the reason we do the lights, he says. After some clarification from the Indiana Department of Transportation, Reynolds decided to stick with tradition and go ahead with the light display, which will be turned on Tuesday, November 20. Custom-made lighted figurines fill 8-10 acres outside of the dealership. Reynolds welder and staff create all of the decorations in house. This year the display is made up of thousands of feet of rope lighting. Each year the display is set up with different themed areas. For instance, we have a country Christmas that includes some old farm buildings with animals, Lawson explains. This year there is also an area that is an old country town, which includes a church and other buildings. There's also what Lawson describes as a winter wonderland, featuring skiers and polar bears. Right now we have a 50-foot abominable snowman. So if you're coming up over the interstate, you see the abominable snowman with a star in his hand like he's getting ready to light the tree, and there's a tree just about as big as him too, he says.

On an average weeknight during the display, Reynolds can attract up to 2,500 cars. That number jumps to about 3,000 on the weekends, and when it gets closer to Christmas time it brings even a little more, Lawson says. The dealership doesn't do anything special to advertise or promote the event. It's really the good graces of the media that are willing to give us any coverage on it. Like I said, we do it for free, we love to do this and it's good that other people hear about it, he says. And Good Will to Men

While there are definite business reasons and benefits for the dealership to keep the tradition alive, Lawson says they family has always done it only for the community and the good will it brings. Despite the urgings of employees and business colleagues, the Reynolds light display has always been an event that is completely free to the public. Over the years people have said Oh, you should charge $5 or $10 per car load for the lights display. We've always said, no we're not going to do that; that's not what we do this for, Lawson says.

However, for the last few years Reynolds Farm Equipment has worked with a local food pantry and a shelter for disadvantaged families. They welcome volunteers from both organizations to accept donations during the nights the dealership stays open late to welcome in the community. On those nights, Lawson says visitors are offered free hot chocolate and can come into the store. Santa is also there to visit with children and the dealership takes free pictures with Santa.

Anything they collect goes right to the food pantry. We don't even touch it. We don't have any of our employees involved. That way, no one can ask, Well gee, I wonder what Reynolds is really doing with that money? Nope, that's their doing, we've allowed them to be on the property to do that, but it's for them and whatever they want to do, Lawson explains. It's worked out really well because it's been a great source of extra income for those families this time of the year for those who depend on the food pantry and the homeless shelters.

While the light display does bring people who might not otherwise come into the store, Lawson says there are no sales motives behind the event. We really never utilize this as far as a business avenue as far as trying to get new business. We've just done this for what it's worth and that's just good will, he says.

The light display is a way for Reynolds to connect and give back to the community. It's something we just love to do and it encompasses all we love about Christmas, and on the other hand the lights kind of tell you where we are too, says Lawson.