Customers get their first taste of the technology during fall harvest.

The next phase of precision farming technology — autonomous farm equipment — is no longer just an experiment. 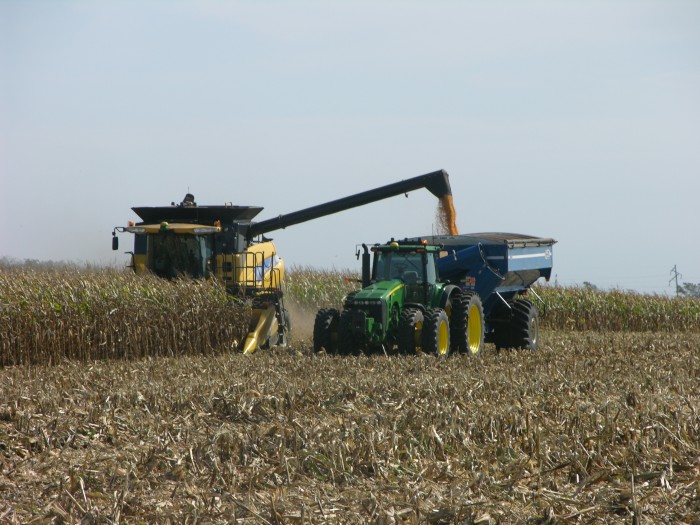 An autonomous tractor and grain cart follow along a combine harvesting corn during a demonstration this week in Monmouth, Ill., of Kinze Manufacturing's new autonomous harvest system.

Kinze has been working since 2009 to develop an autonomous grain cart system that allows an unmanned tractor to accompany a combine through the field during harvest. Kinze partnered with Jaybridge Robotics, of Cambridge, Mass., to develop the autonomy software to test the system.

After first unveiling the technology in 2011, Kinze refined the software to provide more reliability and better safety.

“We improved the sensors and the transfer speed on the pass,” says Rhett Schildroth, project manager for Kinze. “We also improved path efficiency, so the tractor takes the most direct route through the field and avoids obstacles.”

While an operator must manually unload the grain cart to the truck, the system is more precise and more reliable than a person when it comes to following the combine in the field, says Joe Krupps, one of three farmers partnering with Kinze to use the technology.

Although not well versed in precision technology, the Galesburg, Ill., grower says, the autonomous system has simplified operations and improved efficiency on his 1,100-acre farm.

“It does what I want it to do, when I want it to,” Krupps says of the system. “It doesn’t spill grain and it doesn’t misunderstand you. Those are big benefits.”

Another potential plus for farmers is a reduction in manpower needed during busy seasons.

Todd Painter, co-owner of Painter Farm Equipment in Monmouth, Ill., says farmers’ ability to save money on seasonal hires will be a key selling point of the autonomous systems, which is yet to be priced by Kinze.

Kinze plans to continue release previews of the autonomous system in 2013.

“One of the biggest benefits is going to be labor savings,” Painter says. “It can be hard to find qualified people, especially in the spring and fall, and I see this is as a way to reduce that need by one or two people needed to run the tractor.”

But any reduction in workforce, won’t translate to diminished safety with the autonomous harvest system, Schildroth says.

Throughout testing of the system, Kinze engineers fine-tuned obstacle sensing using “real-world” scenarios such as fence posts, animals an other vehicles.

“The system is equipped with real-time sensors to adjust and avoid obstacles, including humans,” Schildroth says.

In his limited experience with the technology, Krupps says safety hasn’t been an issue.

“It recognized dust out of the combine,” he says. “An excessive amount flew out the back end of the combine with the cart coming behind and it just stopped until it cleared. That worked very well.”

As Kinze expands distribution in the coming years, training will take place to get dealers up to speed on the technology, Schildroth says.

That will include the ability to maintain the systems.

“The dealers will be trained on all aspects including how to operate the systems and its installation,” Schildroth says. “They will be the first line of support in the field and in making sure the systems work as intended.”

Check out these videos shot during the demonstration.

Jack Zemlicka is the Technology Editor for No-Till Farmer. He covers precision farming practices, products and trends, which can improve efficiency and productivity for no-till farmers.

He joined Lessiter Publications Ag Division in 2012 and also serves as managing editor of Strip-Till Farmer.