The Company’s North American Industrial Division net sales in the second quarter of 2012 were $70.1 million, an increase of 18% compared to the $59.3 million achieved in the prior year’s second quarter. For the six month period, net sales were $134.9 million in 2012 versus $108.4 million in 2011, an increase of 24%. The results included the contributions of Tenco outlined above. The Division also benefited from increased sales, particularly in its mowing- related products.

Alamo’s North American Agricultural Division net sales were $53.1 million in the second quarter of 2012 versus $55.5 million in the comparable period of 2011, a decrease of 4%. For the first six months of 2012 net sales in the Division were $101.4 million versus $105.2 million in 2011, a decrease of 4%. The softer results reflected slower overall conditions in this sector compared to the high growth rates experienced in the last two years. For this Division in particular, higher dealer inventories, especially in the areas that have been affected by recent droughts, had an adverse affect on sales.

Ron Robinson, Alamo Group’s President and Chief Executive Officer, commented, “While we continued to contend with weakness in some of our markets, strong results in our Industrial Division continued to propel Alamo’s overall growth. Nearly all major product lines in this Division showed increases, led by our mowing equipment.”

“Our Agricultural Division, while still operating at healthy levels, showed some softness in the quarter, as higher dealer inventories continued to constrain sales. We are hopeful this situation will improve in the second half of the year as retail sales are expected to cut into inventory levels. Adverse weather conditions have also continued to challenge our business. Last year, droughts affected our Texas and southeastern U.S. markets, whereas this year it is the Midwest that is being primarily impacted by drought conditions. Furthermore, sales of smaller agricultural equipment, mainly sold to hobby farmers, have been softer due to continued economic uncertainty.”

“The continuing deterioration in the European economy has also affected our results, though, in general, we believe we are holding up better than the markets we serve due to our established position. That said, the economic environment faced by our European Division is unlikely to show much improvement for the remainder of 2012.”

Mr. Robinson concluded, “Overall, we feel positive regarding the outlook for Alamo Group. Driven by steady demand for our products in both agriculture and infrastructure maintenance, we are well-positioned for success while operating in a challenging economic environment.”

Alamo Group is a leader in the design, manufacture, distribution and service of high quality equipment for right-of-way maintenance and agriculture. Our products include truck and tractor mounted mowing and other vegetation maintenance equipment, street sweepers, snow removal equipment, pothole patchers, excavators, vacuum trucks, agricultural implements and related after market parts and services. The Company, founded in 1969, had approximately 2,500 employees and operates eighteen plants in North America and Europe as of June 30, 2012. The corporate offices of Alamo Group Inc. are located in Seguin, Texas and the headquarters for the Company’s European operations are located in Salford Priors, England. 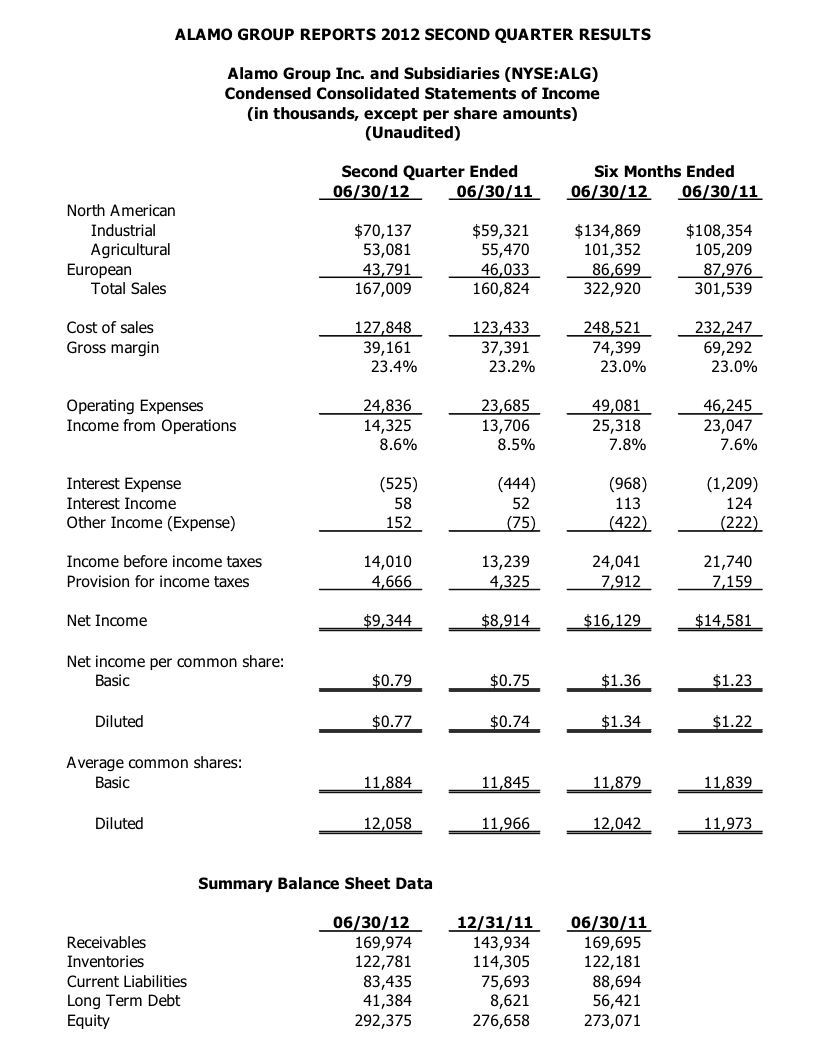