By Dave Kanicki posted on April 1, 2012 | Posted in Dealers on the Move 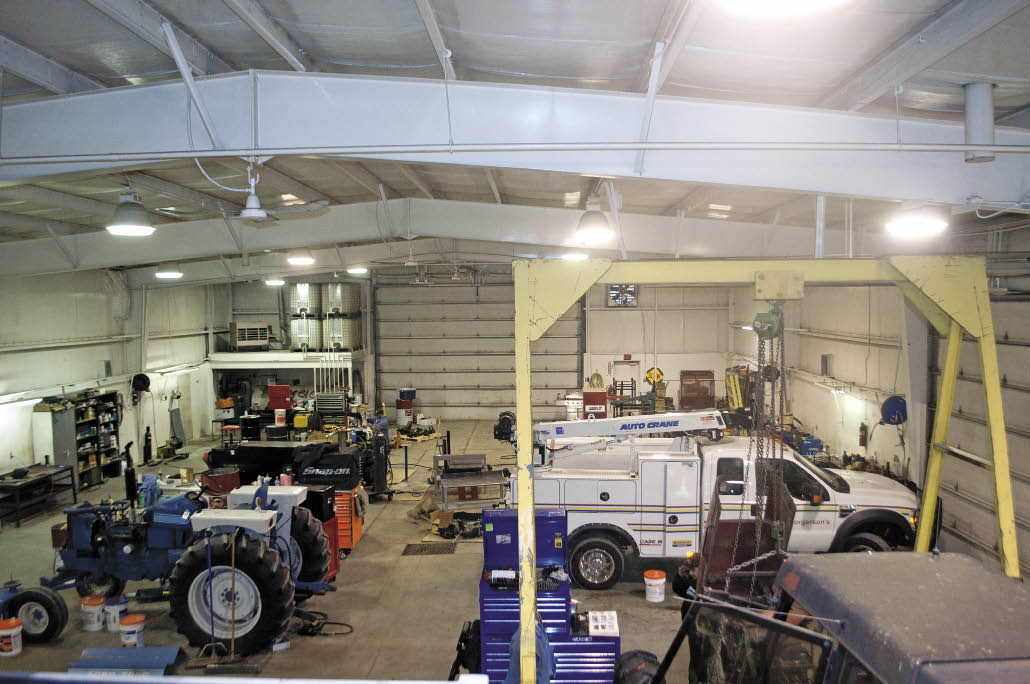 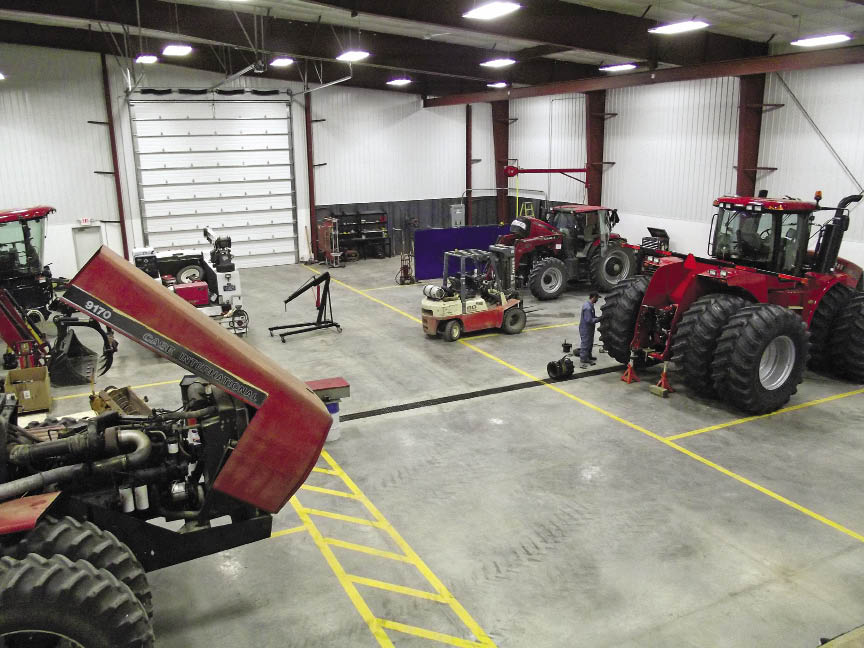 Torgerson’s old service shop (top) was cramped and inadequate to allow for significant improvement in the dealership’s absorption rate. The efficiencies afforded by its new 120 x 180 foot service area (bottom) provides for the space required by Case IH’s largest equipment, and a layout and workflow conductive to improving technician recovery rates and billing efficiency. It also creates a much more comfortable and safe work environment for all Torgerson’s personnel.

If you were to ask any of Torgerson’s top management about the most important aspect of farm equipment retailing these days — those operations that, if not given particular attention, can spell dealership failure — to a person they’ll point directly at two things: turning used equipment and service and parts absorption rate.

Increasing used machinery turns is and will continue to be an ongoing objective for the six-store Case IH and New Holland dealership group located in Montana. But they recognized if they were to make significant improvements on parts and service absorption rates, it wouldn’t happen with their current facilities.

“We’re not where we need to be when it comes to absorption,” says Brion Torgerson, CEO of the dealership group. “But there wasn’t a lot we could do to get our numbers up with the old shop. It was cramped and really inadequate for today’s larger equipment. We’ve made a big investment in the new 120 x 180 foot facility in Great Falls with the goal of increasing technician productivity and improving billing efficiency.”

Improving the metrics of it service operations was the impetus for the design and construction of Torgerson’s huge, new service facility that was opened for use in earlier this year. 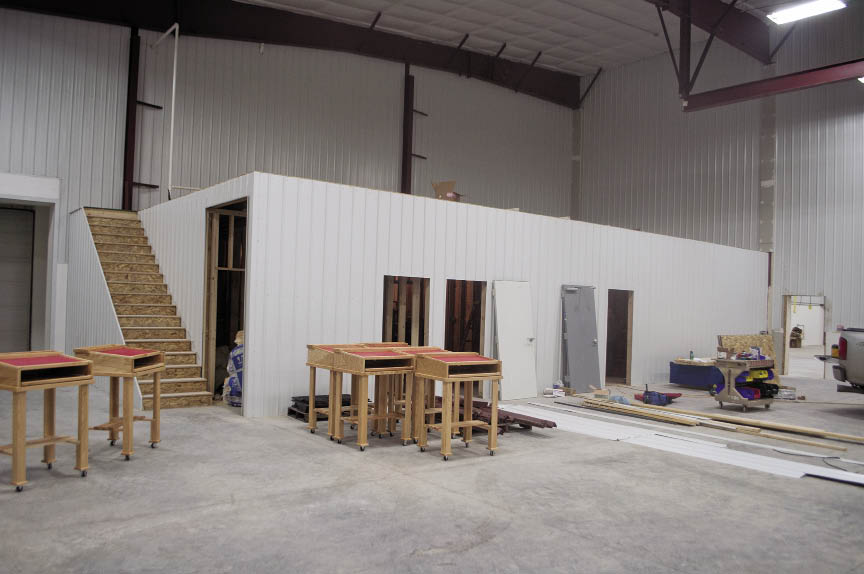 Phase two of Torgerson’s shop modernization will include offices for both the service manager and service writer on the the second-level along with a break room for employees.

While Brent Otness has been Torgerson’s service manager for less than a year, it hasn’t taken him long to figure out the Great Fall’s absorption rate that’s been hovering around 70% wasn’t cutting the mustard.

He says the two most important objectives he’s focused on since taking on the new job is improving recovery rates and billing efficiency.

According to Otness, his goal is to raise shop recovery rates to the 75-80% range and billing efficiency to 96-98%. He believes the Great Falls store needs to achieve a 75% recovery just to break even. With that, he’s shooting for 80-85% or higher to assure the shop is profitable. The new facility will go a long way toward achieving those goals. 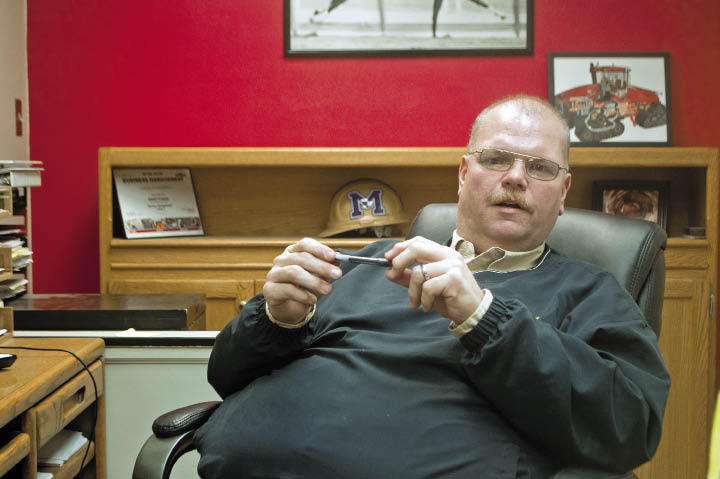 With the new service shop up and running, Brent Otness, service manager, will focus on improving shop recovery rates to 80-85% and billing efficiency to 96-98%.

The new shop at Torgerson’s Great Falls dealership was two years in the making, according to Wayne Fischer, aftermarket support manager, who along with Eric Torgerson headed up the project with a lot of input from Otness and his team of technicians. But ideas for the new service facility began long before that.

Fischer says many of the ideas incorporated into Torgerson’s new shop came from other dealerships he’s toured. He points to Booth Machinery’s facility in Yuma, Ariz., as one of the prime examples he used to model Torgerson’s newly opened service shop. 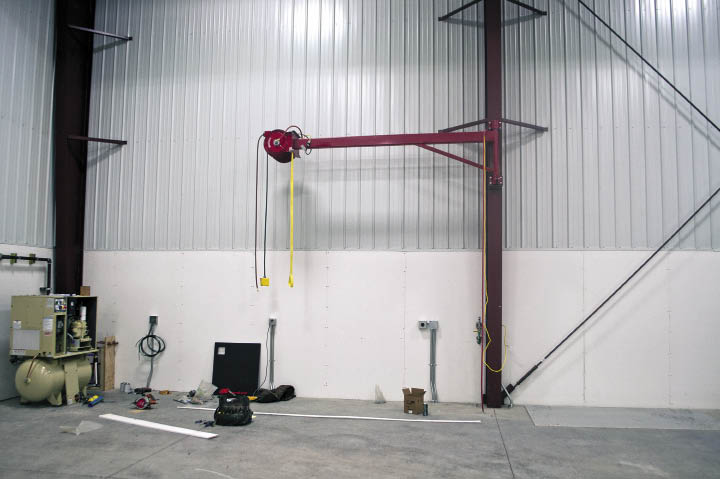 Installed jib arms will provide each work bay with its own air, fluid and lubrication supplies. The air compressor in the corner will be a rotary type vs. a piston type because it’s more efficient and can utilize a smaller tank. It’s also far less noisy, which also makes for an improved work environment.

“It’s one of the best service facilities I’ve ever seen. It’s not only a very efficient layout and design, but they’re doing everything electronically. What they did with their facility allowed them to improve their job pricing and to develop a flat-rate manual.” This, Fischer says, is something Torgerson is working toward with its new shop.

The new building is divided nearly in two, with 10 oversized work bays on one side and eight on the other. Already larger many farm equipment dealership service areas, it was designed to be easily expanded as needed in the future. “We have compressed air at every work station and all of our air and electric was buried in the cement. This makes it more efficient and gave us a tremendous cost savings,” says Fisher. 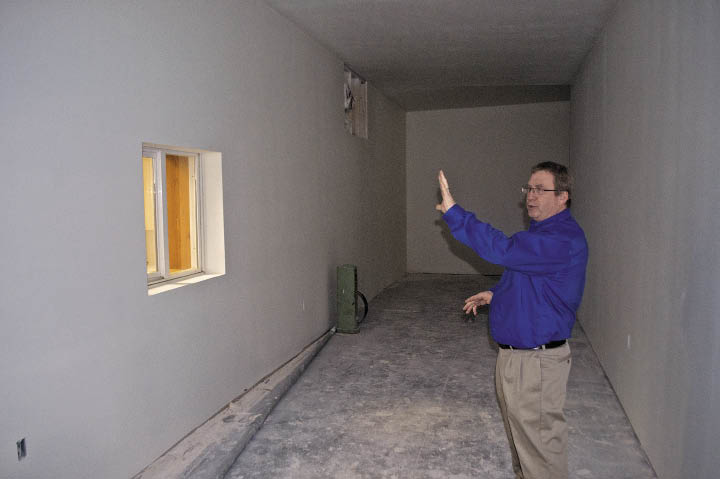 Wayne Fischer, aftermarket support manager for the Torgerson organization, explains that they built a 10-foot barrier between the old shop and new service area to meet fire codes. It will also serve as the walkway for customers to go from the showroom to the service offices without entering the shop area. He says it will also be the dealership’s “hall of fame,” displaying a variety of photos depicting Torgerson’s history.

He adds that the old shop utilized “big can” halogen lighting, but the new facility will feature T5 lighting that draws only about 3 amps per fixture. “The old lights drew probably 20 times that much electric,” he says.

Phase one also included a room for special tools, a locker room, break room and a bathroom. The next stage includes offices for the service manager and service writer on the second level along with an employee break room.

The entire facility also features a heated floor. This accomplishes two things, says Fischer. “These floors will stay dry, even in the winter when snow-covered equipment is being worked on. It’s also much more comfortable for the techs. It’s the only way to go if you’re going to build something like this.”

Each technician will have his own portable work station with a wireless laptop or electronic service tool (EST), according to Wayne Fischer. “If they’re working in that far bay, they’ll still have access to the electronic parts catalogs and service manuals. They can create pick lists for needed parts and send it directly the parts department. He should never have to leave his work station. It’s all about efficiency. The less steps the tech has to take, the more time he can turn wrenches, and the faster we can take care of the customer.”

The shop doors are 20 x 24 feet to accommodate Case IH’s largest combines and sprayers. “We left it large enough to handle even bigger equipment because you know it’s going to get bigger. We could even get a drill in here when we need to,” Fischer explains.

The new shop also features a new equipment wash facility with a heated floor so it can be used all year long, even in Montana’s cold, snowy winters.

Fischer explains that Torgerson’s policy is that every piece of equipment that’s serviced at the dealership gets washed and detailed, according to Fischer. This holds true for trade-ins, as well. “It’s large enough so we can pull a 70-foot air seeder through to clean it up. It was also designed to enable us to pull a semi-truck through with equipment on a trailer and the driver never has to back it up. Most accidents happen when you’re backing up, so we removed that element and minimized the potential for accidents.”

Even after his 40-plus years of retailing farm equipment, Eric Torgerson is impressed with the new shop in Great Falls. “The building turned out phenomenal. I’m just really impressed. The other day, in one half of it we had three Quadtraks, two combines and an SP sprayer and it still wasn’t full,” he says. “It was a great team effort and this facility is going to pay for itself in no time.”