It's Thanksgiving in the U.S. tomorrow and all of us at Farm Equipment magazine and Lessiter Publications want to wish all of our readers a joyous and blessed Thanksgiving.

If anyone has a reason to be thankful, it's all of us connected with agriculture.

Along with our best wishes for the holiday, we also want to share with you some information about ag's role in the traditional Thanksgiving feast of turkey with all of the trimmings most of us will share with our loved ones.

The turkey industry in the U.S. is a $4.4 billion business.

The U.S. turkey industry produces over one-quarter of a billion birds annually, with the live weight of each bird averaging over 25 pounds. Production of turkeys in the U.S. is somewhat scattered geographically. In terms of cash receipts, the top five turkey-producing states in 2010 were Minnesota, North Carolina, Missouri, Indiana and Arkansas. 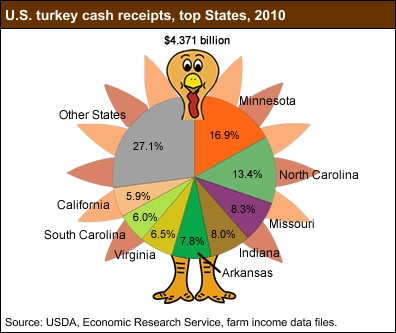 The United States is by far the world's largest turkey producer, followed by the European Union. Even though exports are a major component of U.S. turkey use, the United States consumes more turkey per capita than any other country.

Autonomy in Ag: What Role Will I Play?