Snow Equipment: Getting into Snow Business

In regions with heavy snow accumulations, snow days are great for equipment sales. 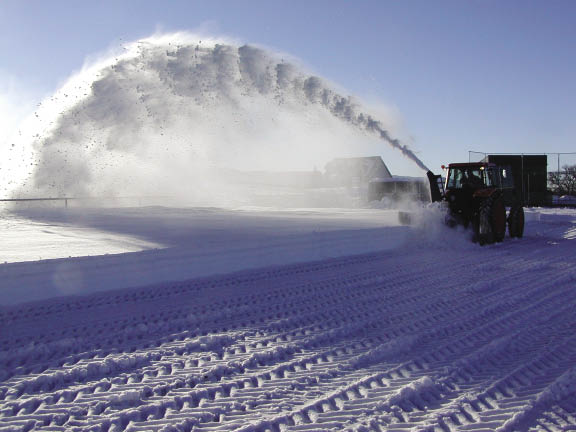 Tractor and skid steer-mounted attachments are impulse items on a dealership’s lot. Because customers will often set out to buy one of the tools on the same day they intend to put it into service, having a selection in stock and ready to load are crucial to making the sale. Nowhere is this more applicable than with attachments for snow removal.

“It doesn’t take much sales experience to sell snow equipment during a blizzard,” says David Sundlie, sales manager, Frank Flaman Sales Ltd., Nisku, Alberta. “If you have it, you will sell it. Farmers will simply ask what models you have in stock, what tractor horsepower it’s rated for, and hand you the money.”

To be successful with snow removal equipment, dealers must be able to anticipate and predict human nature, as well as Mother Nature. Human nature is the easy one. Most people decide it’s time to buy a snow blower or blade during the largest snowstorm of the year.

On the other hand, Mother Nature’s unpredictably can make a dealer lose sleep when it comes to ordering products before the snowy season. If the winter turns out to be mild and the dealer took on too many snow blowers, there will be a lot of cash tied up in inventory for another year.

But if the dealer remembers that there wasn’t a lot of snow the winter before and decides to go a little conservative on new products, the dealership will likely not be able to obtain enough equipment to meet the demand when the snow seems to never stop falling. Once sold out, the dealership could miss a prime selling season and force loyal customers to look elsewhere.

“The sales cycles are very challenging with snow equipment,” says Rich Hillyer, sales and operations manager at Southwest Ag in Bayfield, Colo. “Stocking snow equipment for pre-season sales can be risky. We once went 10 years in a row with below-average winters, selling 10 tractor plows and 20 truck plows a year.

“Then, during the winter of 2008-09, we were hit with a lot of snow. This caused a big problem. We couldn’t find enough snow attachments to meet the demand. For 2010-11, I stocked up. We had a great pre-season sales period, selling around 40 tractor-mounted plows and up to 50 truck plows. We feel really good about those numbers.”

Because of the blizzard conditions the season before, residents wanted to be prepared and took advantage of pre-season sales discounts. For Southwest Ag, those early sales were key because the winter itself was relatively mild. “I am not sure what to expect going into this winter,” says Hillyer.

He considers the months of September to November to be Southwest Ag’s pre-season selling months, then sales die off until the area gets some big snowstorms. “The second customer wave is our emergency buyers, people who are willing to buy anything because their driveway is impassable.” 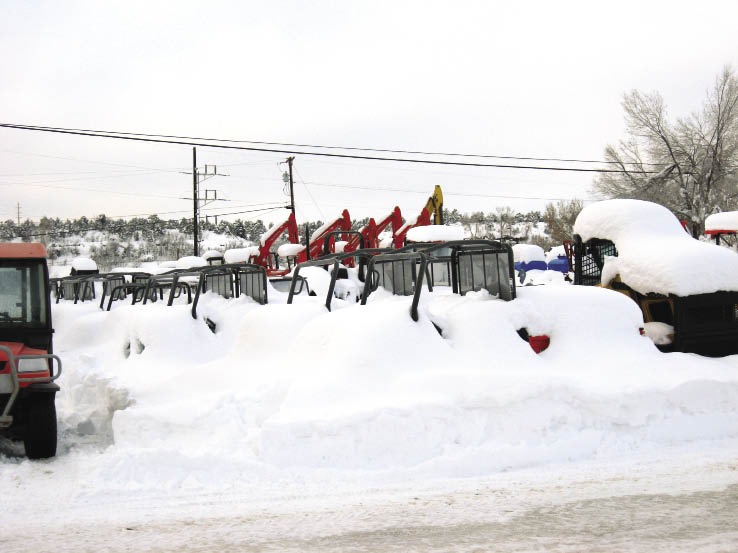 Human nature comes into play during pre-season sales. Although the dealership’s prices and product availability for snow removal equipment are at their best before it starts to snow, it’s difficult for some customers to justify the expense of a new blade or blower before first frost.

Sundlie’s dealership, near Edmonton, Alberta, sells only 5-10% of its snow equipment in the off-season. “We try to use discounts to encourage people to buy snow blowers while they’re in stock, before the snow flies.”

As the snow piles up in parking lots around town and dealerships’ inventory of snow-clearing equipment gets depleted throughout the region, customers who didn’t plan ahead become less choosy.

“Everything from the low-priced to the expensive commercial equipment will sell if dealers are ready with the inventory,” says Sundlie. “Many customers will start out brand loyal, and then quickly switch to a different manufacturer if it means buying something they need.”

During the cold weather months, many of Flaman’s snow equipment sales are completed over the phone, perhaps because customers are unable to get out of their driveways. “Farmers in our area know what the different products are and recognize the brand names. They are confident enough to order it sight-unseen and have us ship it to them.”

There is a direct relationship between equipment sales and the previous year’s accumulation, says Chad Oberson of Oberson’s Snow and Ice Management, a dealer and equipment user based in Fairfield, Ohio. “If it snows the year before, sales will be good the following year. People who move snow commercially will be thinking, ‘I made a bunch of money and now’s the time to update my equipment.’” 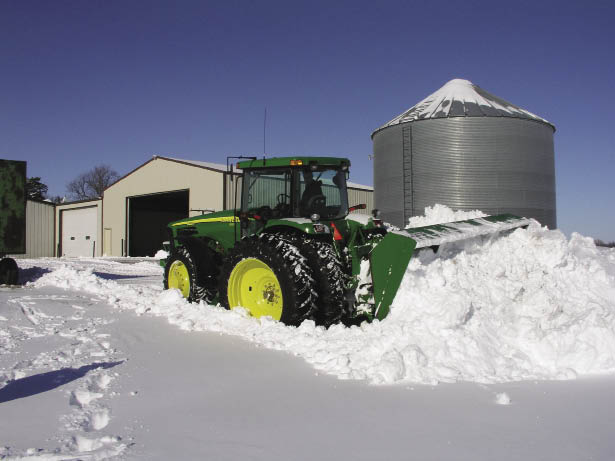 Founded in 1982, Southwest Ag added the snow removal equipment 20 years ago when it took on a line of truck-mounted snowplows.

“Many of our customers have progressed to the point of using their tractors to plow their driveways,” says Hillyer. “Tractors offer better maneuverability compared to a pickup truck and it saves wear and tear. A lot of people have nice trucks. Plowing with a daily driver isn’t hard until you get some deep snows piling up and you have to push the truck hard into the snowbank as the lane gets narrower. When the truck slides sideways into hard-packed snow and the quarter panel gets pushed in, their pickup starts looking like a ranch truck very fast.”

Southwest Ag started selling snowplows on tractors about 12 years ago, when it worked with a blade manufacturer to help install the truck-mounted snowplows. Today, many of its customers buy tractors specifically to move snow. Overall, most snow removal equipment that a dealership sells goes on tractors.

Southwest Ag sells a couple different brands of shortline tractors. It’s had success selling a tractor and a snow blower and/or blade as a package.

In the mountain regions where storms can dump a lot of snow in a narrow valley, a 3-point mounted snow blower can become a necessity. “We sell a lot of them,” says Hillyer. “We put the plow on front to move the average snow falls and a snow blower on back to cut through deep snow. Customers say they don’t like to work in reverse gear, but most will spend 80% of their time driving forward, pushing snow. Some winters they may not even use a snow blower, while in other years they will be thankful they have it.”

Many farmers will start off buying only a blade, says Sundlie, as they typically cost less. “But there is a limit to how much a blade will do. As the snow piles up, you’ll run out of room to push it, whereas a powerful snow blower can clear a ditch.”

Some years, winter will make the highways in and out of the small town of Bennington, Neb., impassable. During the winter of 2009-10 the city of Omaha (a half-hour to the southeast) recorded 47.6 inches of snow.

The dealership doesn’t want snow removal attachments sitting around for long, when selling it is so specific to the whims of Mother Nature. “If they sell, it’s only when there is snow on the ground,” says Mackie.

The dealership makes an exception for a locally made 3-point, rear-mounted bucket that can be used to move dirt or snow. During the winter, farmers and contractors use the hydraulically operated bucket to push, raise and dump snow into piles. Bennington’s customers are farmers who buy the snow equipment for their own use, and a few construction companies that will push snow when they aren’t moving dirt. 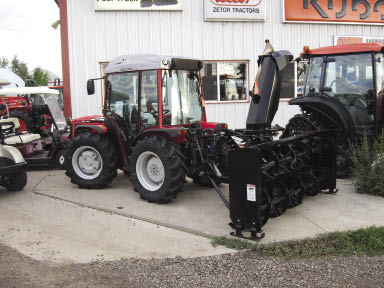 Oberson has a lot of luck moving used snowplows after they’ve been used for a season or two. “The used market is unbelievable. In the middle of a storm, I can sell good used equipment that is available new at $2,900 for $3,200 if I am the only dealer who still has it in stock.”

He markets most of his equipment through good, old-fashioned sales calls. “I call when I have a bunch of used equipment for sale, and I don’t even bring up what I have in stock that’s new.”

Oberson says talking about the used equipment helps him get his foot in the door, after which the customer will often ask about other attachments that might better suit his particular application.

In Sundlie’s territory in Alberta, he says at least 30% of the farmers who buy snow blowers are making money with them by contracting to others in the area. “The guys who are running this equipment commercially have no problem buying a more expensive, better quality unit. Buyers who are just going to use it around the farm are fine with the less expensive brands.”

Oberson understands the value of good equipment. His snow and ice company is part of Oberson’s Nursery and Landscape Inc., founded in 2000. He is both a commercial operator and a dealer of snow removal and other landscaping equipment. 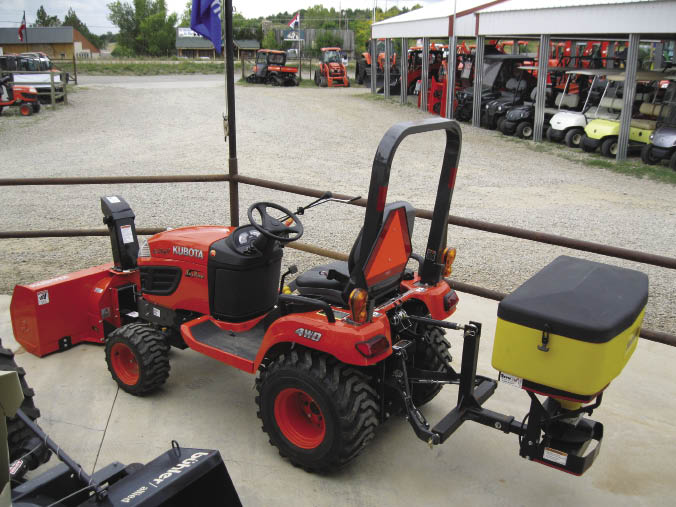 Explaining how he became a dealer, Oberson says, “I had a few stores where I sold mulch and top soil. I thought, since I already had customers coming into the store who owned skid steers and other equipment, why couldn’t I sell them attachments, too?”

During the winter, Oberson works alongside local operators he contracts with to clear snow from areas in Ohio, Indiana and Kentucky. As a snow plow dealer and user himself, he says he’s often concerned about selling to someone who would become his competitor.

Located in the southwestern part of Colorado, 30 miles north of the New Mexico desert and the same distance south from rugged mountain terrain, Southwest Ag “is blessed with a big region,” says Hillyer. “We do a lot of business up to 200 miles away. It doesn’t snow much in the New Mexico desert, but covering this large, diverse area with ranching, horse operations and rural lifestylers means we can usually find a buyer for the equipment on the lot year-round.”

Southwest Ag has a rental yard that helps ease prospective customers into the idea of buying a snow blower and a tractor. “Rental has been really good in our market,” says Hillyer. “Residents may rely on a guy with a truck plow, but when the snow gets too deep he simply has no where to push it. The homeowner is the one hung out there with a long driveway. That’s where a lot of rentals and many of our last-minute sales come from. They finally have a reason to own a tractor.”

While the worst salesmen could sell snowplows in a blizzard, the best have no hope of selling it where snow rarely falls. “If a dealership has a market for snow removal equipment, it can be worth taking on a line,” says Hillyer, “but this isn’t the type of a product where you can go out and create a market.”