Farmers Are Re-learning the Art of Tedding 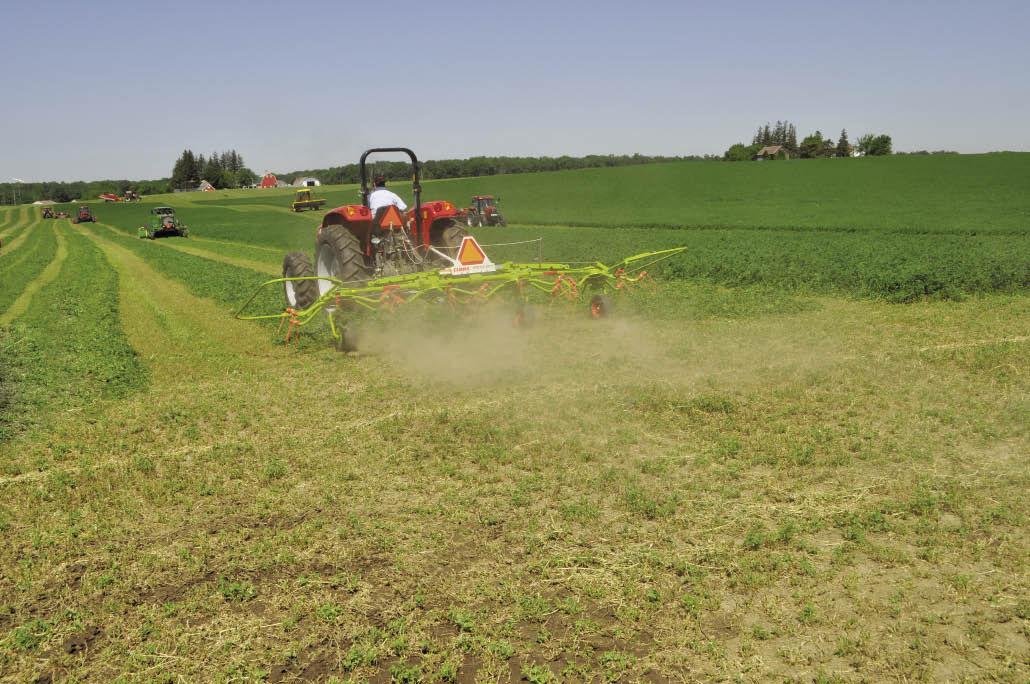 The ancient art of tedding hay is getting a new look as farmers work to speed drying and improve the nutrient value of their forage.

Up until about 10 years ago, tedding, the practice of spreading hay to expedite its drydown, had become nearly non-existent on North American farms. But Chuck Walker says it's making a comeback because farmers are re-learning how to utilize it effectively to improve the entire haying operation.

While visiting this year's HayExpo, June 8-9 in Cannon Falls, Minn., Walker, a territory manager for Kuhn North America covering much of Wisconsin and the upper peninsula of Michigan, identified the growing use of tedding equipment to North American hay fields as a significant industry trend.

The function of tedding is simply to lift and separate mowed hay to hasten drying, according to Walker. "Farmers had stopped tedding because they were losing all of their leaves," which reduces the feed value of the crop.

He places direct blame on poor timing of the tedding operation. "Producers were tedding when they should have been raking, merging, or getting ready to chop or bale," he says. "They lost interest because improper tedding negatively affects hay's quality. But the best hay producers are recognizing once again that proper tedding improves forage quality because they can get the crop off the ground faster and with more proteins."

"Tedding within a few hours of cutting at that perfect wilt stage will keep the leaves intact," says Chuck Walker. "If the farmer finishes cutting a field at 2 p.m., he should be tedding by 4 or 5 p.m. that afternoon to lift and separate the cutting to get the air flowing through the hay as fast as possible." 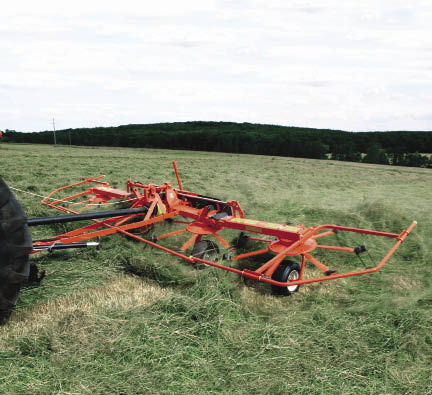 Walker says that the research and haying systems developed at the Univ. of Wisconsin demonstrate that tedding can expedite hay drydown. Simply put, faster drying results in higher forage quality.

"Tedding within a few hours of cutting at that perfect wilt stage will keep the leaves intact," Walker says. "If the farmer finishes cutting a field at 2 p.m., he should be tedding by 4 or 5 p.m. that afternoon to lift and separate the cutting to get the air flowing through the hay as fast as possible. If he finishes cutting later in the evening, tedding should be done the next morning as soon as the heaviest dew is off the hay."

Setting up the tedder for maximum efficiency is also important, according to Walker.

"With a PTO drive rotor-type tedder system, you want a nice forward angle pitch to the tedder so at full RPM it's taking that material and making a nice rooster tail out the back end of the implement. This means the stems are going to stand up higher and the leaves will actually turn down so that stem can get exposed to the sun and the air on top and then you're lifting up off the ground so air can get underneath," he says.

Another trick that he's seeing some farmers use is making a very tight windrow with their mower-conditioner or cutter. This allows the soil around the windrow, that's not covered with hay, to dry out. When the windrow is tedded, the hay is spread over dry ground, which reduces the chance for it to pick up additional moisture.

Given that speed of harvest is critical to producing high quality hay, Walker says that size of the tedder and the tedding speed both play an important role.

"The dealer should match the size of the tedder to the mower or mower-conditioner or to the width of the windrow that the farmer wants to work with," Walker says. "Coming out of the mower, a typical windrow is about 7 feet. With that, a lot of producers will use a little two rotor tedder to lift and separate the hay. If they want to spend a little more money, they can go with a unit that can hit two or more windrows at the same time. We're building tedders with two rotors to 16 rotors that can cover a swath of 56.5 feet wide."

He adds that dealers need to advise customers about the critical nature of speed during tedding. "If you drive too fast, you're going to do an uneven job and you're going to be missing the heart and soul of the operation and that's getting the whole windrow tedded evenly," Walker says. "You can go back and rake and merge at any speed you want to, but tedding is critical in the 4-4.5 miles per hour range. That's why some farmers go with bigger units. They can save time by covering more area while keeping the speed in the proper range."

He estimates that by using a tedder to speed drydown, the grower can save between a day and day and a half. "With the Wisconsin and Minnesota weather conditions, that is just critical," says Walker.

Whether the farmer is producing hay for sale or for his own use, speeding drydown translates to higher quality forage. "Number one, the grower is after the highest protein he can get from his hay and that means getting cut hay out of the field as fast as possible. If he's selling it, he wants a good color and minimal bleaching because color can affect the sale price," Walker says.

"In any case, he wants the highest protein and sugar levels he can get and tedding can help get it in the bag or in the shed much faster. It's all about quality."

Study Confirms a High Percentage of Farmers are Using the Internet

Staying Ahead of Our Customers: The Future Demands Continuous Learning