By Martha Ostendorf posted on September 20, 2010 | Posted in Manufacturer News

Harvest brings a broad spectrum of issues to the 300-bushel table, including staying at 300 bushels once the mark is achieved. Those harvesting high-yielding crops are already struggling with the sheer volume of grain at harvest.

“Since I was a little kid, I’ve had the desire to put more sideboards on the wagons and carts,” says Marion Calmer, a farmer and owner of Calmer Corn Heads, Alpha, Ill. “Things haven’t changed much. We’re going to need more boards.”

But boards may not cut it. One has only to look at the math to see volume will be a problem before grain ever hits the cart. Calmer calculates that 300 bushels of dry corn represents 330 bushels per acre of wet corn in the field. If harvesting at 5 mph using a 30-foot corn head, that’s 6,600 bushels per hour, or an incoming rate of 2 bushels per second.

“The best combine is able to unload at maybe 3 bushels per second,” Calmer says. “The incoming rate is 66% of the outgoing rate, which means almost constant dumping.”

He notes that some of his customers running 24-row corn heads are already chasing each combine with 3 or 4 grain carts. This creates a couple of equipment challenges.

Number one, Calmer says, is minimizing compaction. He says dealers and equipment manufactures need to start educating farmers about the need for tracks for combines, grain carts and even tractors.

“If a grain cart is putting 25 pounds per square inch of down pressure on the soil, putting on a set of tracks will cut that amount in half,” Calmer says. “We have to limit compaction. As we grow more corn, we are more likely to create compaction, which limits our ability to grow more corn.”

It’s a counter-productive cycle, he says.

While tracks may reduce compaction, they don’t completely solve all the issues that constant dumping creates.

“Unloading and dumping on the go is fine when the combine auger is over the harvested area, but the real challenge is when you turn around and head the other way,” Calmer says.

To dump when needed, this problem leads to grain carts having to travel the entire length of the field instead of minimizing traffic. Or, combines have to stop harvesting and reposition to unload.

“We can’t allow 300-bushel corn to slow us down at harvest. It’s just not acceptable,” Calmer says.

As the last few years have proven, delays in harvest can mean some corn never leaves the field — a definite ding in overall yield numbers.

“Equipment manufactures need to make it possible for corn to be unloaded from either side of the combine,” Calmer says. “It’s already been invented and I think the first manufacturer to pick it up will sell a lot of combines.” 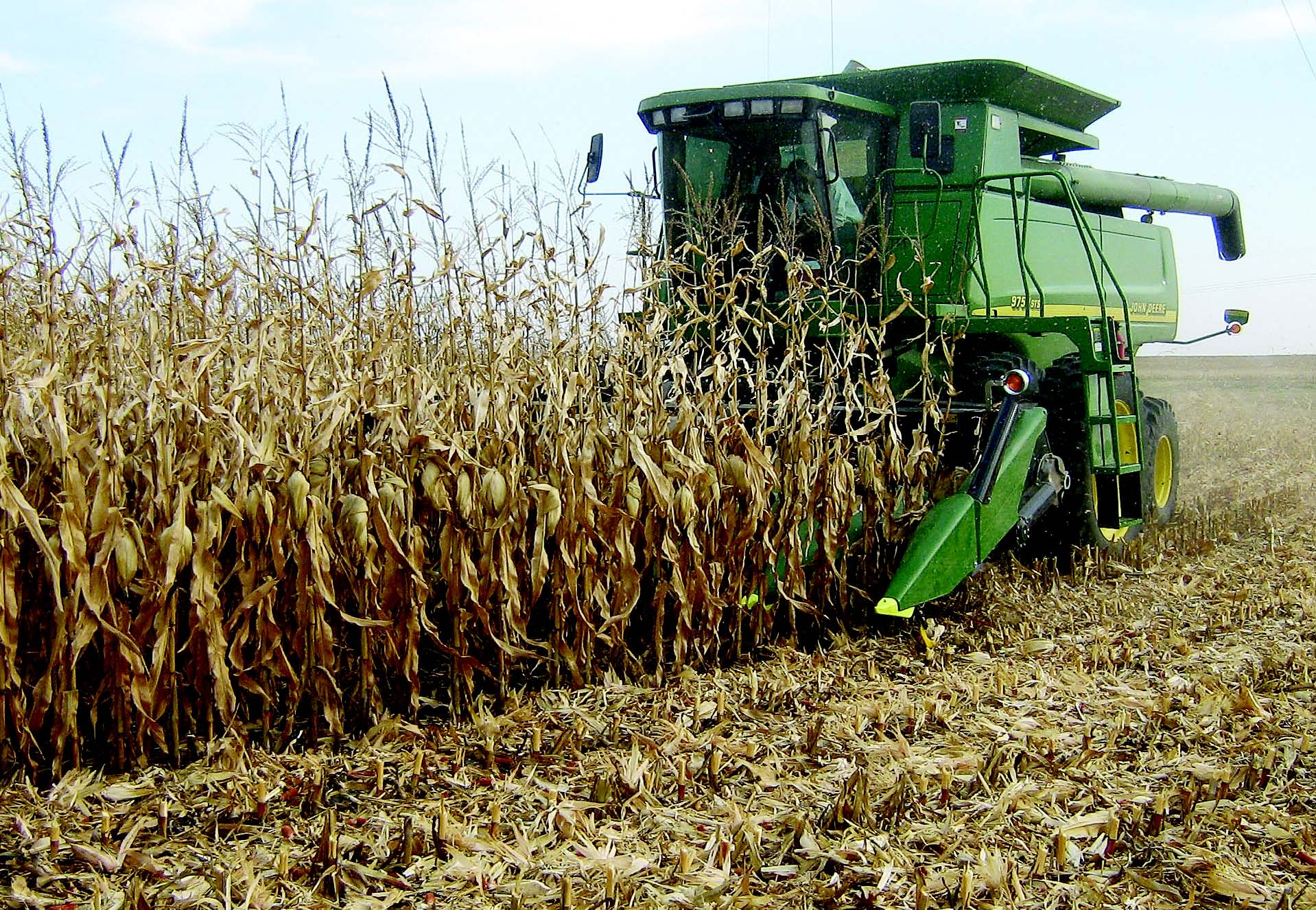 Growers who are harvesting high-yielding crops are already struggling with the sheer volume of grain at harvest. This can put a definite ding in overall yield numbers, which isn’t acceptable, says Marion Calmer. ”We can’t allow 300-bushel corn to slow us down at harvest.”

More cameras and monitors will be necessary to safely handle the increased activity in the field. The same goes for more automated functions.

"Auto-steer, auto-height and autotilt are a must for harvesting corn,” Calmer says. “I’m busy enough setting the combine, talking on the radio, talking on the phone and unloading the grain cart that I don’t have time to steer the combine anymore, especially as fatigue sets in.”

He recommends dealers encourage cameras and TV screens to ease unloading. “The cab starts to get a little busy, but it beats cranking your neck 90 degrees to look at the cart,” Calmer says. A similar system for the grain cart operator would also be a plus, he says.

The twin-row/narrow-row debate may end up getting solved at harvest. Coming back to the point that highyielding corn can’t slow harvest, twin rows are looking like the loser with current equipment.

“Harvesting of twin rows has been relatively unsuccessful because of reduced speed and high grain loss,” Calmer says. “If you want to know what harvesting twin row is like, just drive off the row by 4 inches and it will show you what it does for header loss and ground speed.”

He says producers he’s watched have tried twin row for a few years and then switched back to narrow rows. With a 15-inch header, producers can harvest 15-inch or 30-inch rows of corn and they are narrow enough that a producer doesn’t have to worry about following the row, Calmer says. It’s non-directional. A 20-inch header can harvest 20- or 40-inch rows. The diamond spacing of twin rows means the combine will always be off the row.

"Twin row is a step in the right direction. If you’re going to raise populations, nothing is better than having plants spaced equally,” Calmer says. “The trouble is while you may hit 300 bushels in the field you’ll have trouble getting it to the grain bin.”

His observation is that producers are moving to 20- or 15-inch row spacings, possibly even 12-inch.

Some companies are taking twinrow and increasing amounts of residue into consideration in their header designs.

In 2010, Geringhoff introduced a twin-row Rota Disc head that can harvest twin row despite less-than-ideal stalk presentation to the row unit. It also serves to process the stalk for improved residue deterioration.

There is a multitude of chopping corn heads on the market to manage residue. One thing to consider, however, is not to lose focus on getting all the grain out of the field.

Taking harvest residue management a step further is the development of biomass harvesters, essentially balers that are towed behind the combine. Residue is air-delivered straight from the combine and made into large square bales. AGCO is currently showing such a product and plans to start marketing them to growers in the near future.

The design allows for removal of some residue while still leaving some in the field for erosion control.