Perfectionism, control issues and getting caught up in the details are all positives in achieving the elusive extra bushel. And equipment manufacturers are delivering the tools to give producers ultimate control at planting.

Planting experts say the successful producer will whittle away at the margin of error through laser-accurate planting function, take advantage of variable-rate technology and rely on automatic monitoring and adjustment while still balancing the drive for bigger and faster with agronomic function.

“In the prime of the Corn Belt, we’re already at 220-250 bushels per acre under commercial practices. We need those fields to actually hit 400 or 450 bushels and that’s where tightening the margin of error with the planter comes in,” says Dustin Blunier, marketing communications manager with Precision Planting.

It’s not necessarily about the latest and greatest changes in equipment, he says. It’s about refining and perfecting the process. 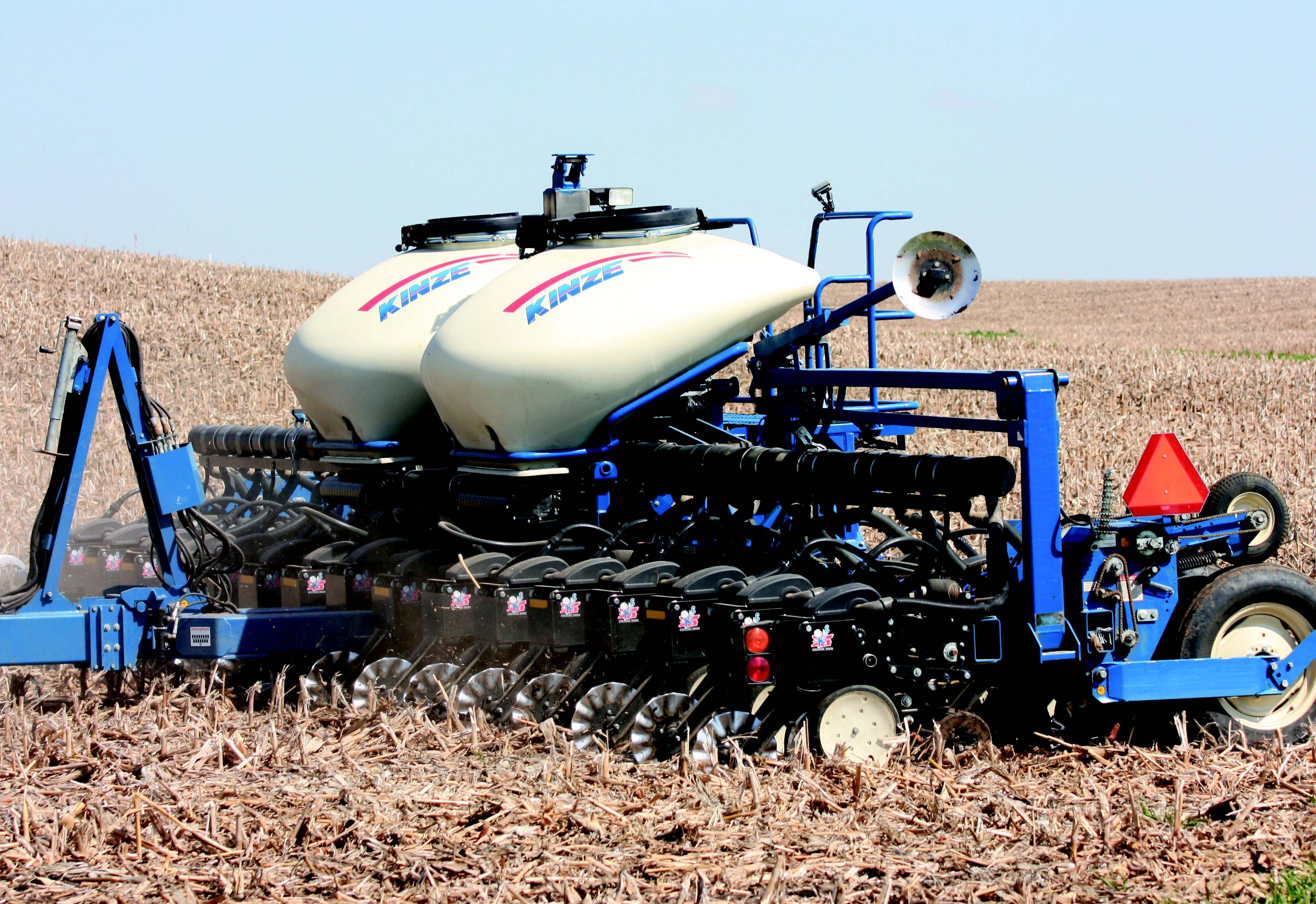 Extra bushels can be found at planting time by making sure each seed in the field is placed so it doesn’t compete with its neighbors. That’s as true in the middle of the field as it is in the point rows and headlands. Maximizing production on every single acre is necessary when reaching for 300-bushel averages.

“Planting is the first opportunity for producers to take away from yield potential,” he says. “They can select the right hybrid, the right population and the right row spacing but if the planter is off on population, depth or singulation, the yield potential starts to decline.”

To head off those losses, planting equipment needs to perform consistently and producers need to be able to closely monitor and control performance.

“There are monitors available that give row-by-row data that tells you exactly where seed is dropped in the field,” Blunier says. “Producers can see if meters are operating, if drive systems are working and where adjustments are needed.”

They’ve also started to measure down force on the row pin to gauge how much weight is being placed on the seed trench. There are systems available to monitor pressure and automatically adjust a pneumatic system to maintain ideal down force. Another sensor measures ride/bounce of the row unit, allowing producers to know if they can speed up or if they need to slow down to maintain performance.

A monitor providing all this information is the latest tool adopted by 21-time National Corn Growers Assn. (NCGA) Yield Contest winner Jerry Cox of Delta, Mo. He credits it with helping him achieve better singulation and picket-fence stands.

“It’s critical to get seeds evenly spaced and at the same depth for even emergence,” Cox says. “The monitor tells me what the down force on the row unit is and lets me know if conditions change. It has really improved planting.”

The ride function tells him not only if he’s driving too fast to do a good job of planting, but how much money he’s losing per acre when going too fast for good singulation.

“People always want to know how fast I drive at planting. I base speed on what the monitor tells me conditions are and how my planter is performing. I may plant at 3 mph some times and 6 mph other times,” Cox says. “I’ve easily added 10 bushels across the board since I got the monitor.”

Using row cleaners and being able to manage down pressure is yet another function of increasing importance due to tough and excessive residue from high-yielding, tough-stalked Bt corn, Blunier says. To create an ideal seedbed the row cleaner should just skim the surface, a feat not consistently achievable with a fixed row cleaner, he explains.

“Floating row cleaners with a pneumatic down pressure system allow more control over planting conditions,” Blunier says. “In heavy trash more pressure can be used and in softer conditions pressure can be reduced to avoid trenching. Being able to know what that pressure is and control and adjust it will optimize the seed bed for even emergence.”

Extra bushels can be found at planting time by making sure each seed in the field is placed so it doesn’t compete with its neighbors. That’s as true in the middle of the field as it is in the point rows and headlands.

The gains may seem small, but maximizing production on every single acre is necessary when reaching for 300-bushel averages, she says. And the technology continues to improve. Technology from Trimble, for example, now allows for control of 48 individual clutches to avoid seed overlap and a new valve to simultaneously stop liquid fertilizer application.

A great partner for row clutches are hydraulic drives, which allow producers to adjust population rates on the go. Most hydraulic drives will adjust to the new rate in 8 feet or less to maximize performance based on yield zones or soil types, Blomme says.

Trimble claims that by using a rate control system to time rate changes, Rawson drives can respond 50% faster than standard rate-control systems. This makes the transition to different soils quicker and more accurate.

According to Precision Planting, a hydraulic drive system is smoother than a ground drive, which may improve meter performance. But hydraulic capacity of the producer’s tractor may be a limiting factor and require upgrading.

For maximum benefit, the producer needs to be taken out of the equation. Variable-rate controllers guided by GPS or RTK can adjust rates precisely on the go using prescription maps that consider past yields and soil types.

“If we’re going to achieve the highest yields possible, these tools are necessary,” Blomme says. An area for improvement may be the speed with which the drives are able to switch populations. Being able to switch populations at the exact point where soil type or other conditions change — instead of having an 8-foot changeover — would reduce margins of error and get every square foot of soil getting the right population.

A significant trend in seed handling is bigger and faster augers, Chris Finck of Show-Me-Shortline says.

"Ten years ago, the average auger was 8-inches in diameter, now the average is 10-12 inches,” he says. Augers run up to 16 inches, but higher capacities mean higher horsepower requirements.

“It’s all about the efficiency,” Finck says. “Bigger, faster seed tenders keep planters in the field longer, and bigger, faster augers get trucks back to the field sooner.”

Producers must be able to get the crop in the field quickly to avoid yield losses due to late planting. One way to achieve that is to trim fill time with bulk systems.

The Kinze Air Seed Delivery system features two 55-bushel hoppers that are filled instead of individual row units. A single blower fan is the only moving part and moves seed to the row units as needed.

Bulk fill also can hamper yields if not properly managed. Large hoppers in the center of the planter mean a lot of weight on the toolbar. Kinze uses a hydraulic weight transfer mechanism to distribute the weight of the hoppers across the toolbar and ensure even depth on each row unit. Blomme says compaction, and resulting yield losses, is an issue producers and equipment manufacturers will have to watch with bulk systems.

“I’ve seen fields in Iowa where you could tell the grower used a bulk system,” Blomme says. “There was compaction over the center tires and it affected 4 rows. The soil was so compacted that the plants never emerged.”

Adding more weight to the wings is one option, but some soils can’t handle the extra weight.

“We need planters to be lightweight and durable to achieve top yields,” Blomme says. “If using bulk hoppers, why not use the weight that’s already there and distribute it across the toolbar?”

Mechanized distribution in combination with bulk hoppers can help improve consistent seed depth over individual hoppers, which lose depth when seed gets low, she says. A mechanized weight distribution system fixes that problem.

In the push for higher yields producers must also push up populations, which can lead to equipment and agronomic challenges.

“If populations stretch into the upper 30’s, you start to stress every seed put in the ground if planting in 30-inch or wider rows,” Blunier says. “That’s where it’s critical to start looking at twin- or narrow-row spacing and making sure the meter is up to the task.”

The seed meter needs to be able to space out seed at higher accuracy and precision because skips and doubles can quickly drop yield potential. A skip equals a lost ear. Plants on either side of the skip will perform a little better, but only make up about 80% of the lost plant, Blunier says. For doubles, plants will compete with each other and reduce each plant’s potential by 40%. As populations increase there is even less room between plants, so placing the seed precisely is essential for pushing yields.

“Our meters have to be performing at 98.5% accuracy or they don’t go out the door,” he says. “Meters need to be calibrated and responding to the seed size and type going into it.”

Companies such as Great Plains are focusing on details, like the effects of static cling on seed drop, to improve accuracy. Its new Air-Pro meters use polymers that reduce static electricity and composite brushes with interwoven metal bristles to further eliminate static cling and ensure that seed drop is the same every time. They’ve also redesigned their seed tube curvature to provide a dead-on drop at 5.5 mph.

Varying seed size and shape from year to year can make consistent meter performance a challenge, which is why Blomme says vacuum meters will become increasingly important in the push for higher yields.

“We’re seeing a big trend toward vacuum-type metering systems,” she says. “A simple adjustment in vacuum pressure and changing the singulator brush to be more or less aggressive allows the systems to handle any shape or size seed. Mechanical meters can’t make those adjustments.”

Vacuum can now be manipulated on some vacuum meters for simpler row shutoff. The SureVac electric row shutoff introduced in 2010 by AgLeader works with John Deere vacuum seed meters and eSet vacuum discs from Precision Planting for row-by-row shutoff control.

While equipment manufacturers have tried to move forward with different configurations, demand has been an issue.

“The jury is out on twin rows,” Blomme says. “A lot of people are waiting for more research to come out.”

On the other hand, Great Plains and Monosem are heavily invested in introducing and making the twin-row cropping method work.