A Combine for the Future?

With combine harvesters now at the legal limit in terms of width and height the only dimension not yet reached is the maximum road legal length of 12m.

Massey-Ferguson is looking to explore this as one possible way to develop an even higher-capacity machine. 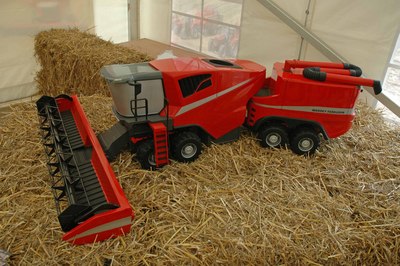 Using aluminium for as many parts as possible — including the grain tank — helps to keep the weight down, but even if the 700-horsepower monster makes it to the production stage then it could have a target operating weight of around 22 tons. Carried on 4 axles, all 8 wheels have their own 65-horsepower electric motors. Providing 520-horsepower of additional power in the field, they will be disengaged during transport.

The 18,000-litre grain tank trails behind the articulation point. A hydraulic side shift mechanism, which pushes the sides out by a metre, boosts the capacity to 24,000-litres.

Using air pressure, grain is unloaded at the rate of 200lit/sec. Despite its size, the machine is still road legal. But they had to use 1.4m-tall tyres to keep it under 4m. MF stresses it is purely a concept to show one possible direction combine development could take in the future.

Another future combine can be found on Profi's forum where a user has uploaded pictures of a John Deere prototype working.