While commodity economics remain a bit “iffy” going into the last half of 2010, the trend toward higher prices along with lower farm inputs are pointing to a good potential for strong equipment sales through year end.

“We have always noted that the strongest predictor of equipment sales is farm cash receipts, not farm net income — as farmers lower their taxes by reinvesting in the business and/or pre-buy inputs for the following year,” says Ann Duignan, told investors recently.

The machinery analyst for JP Morgan adds, “This year is a little unusual and may be an exception to the long-term trend as cash receipts, or revenue per acre, may be down a little, but input costs are down 31% year-over-year.”

She says that her analysis of farmer variable margins suggests profits of about 53% per acre for corn vs. 38% a year ago, and variable profits for beans of 61% vs. 34% last year. “As a result, we expect strong year-end spending by farmers in order to minimize taxes.”

Higher Yields. Based on input from an Iowa farmer, Duignan says that growers are expecting higher yields as a result of the early planting season. While higher yields are anticipated, crop pricing is expected to be lower and revenue per acre is expected to be down from $763 per acre last year to $696 per acre this marketing year — a 9% decline year-over-year. However, input costs are down from $474 per acre to $325 per acre — 31% year-over-year.

“As a result, variable profit this year is expected to be $371 per acre, or 53%, which is up 28% year-over-year,” says Duignan. “This year may be unique as we normally use revenues — or cash receipts — as the driver of equipment sales; however, this year variable profit may be more important.”

Higher Prices. A different story is unfolding for soybeans, though. Not only are yields expected to be higher this year (potentially by 10%), with higher demand and lower inventories of old-crop beans, prices are actually better this year compared with a year ago, she says.

Pre-buying Factor. “As a result of strong crop economics, we would expect to see strong pre-buying into year end as farmers sit with their tax planners and attempt to lower their tax liabilities,” Duignan says. In addition, she also expects a “modest pre-buy ahead of the 2011 emission standard changes.

With the early planting season and decent weather that should deliver strong crop yields, Duignan is forecasting “very robust sales in the second half” of the year. 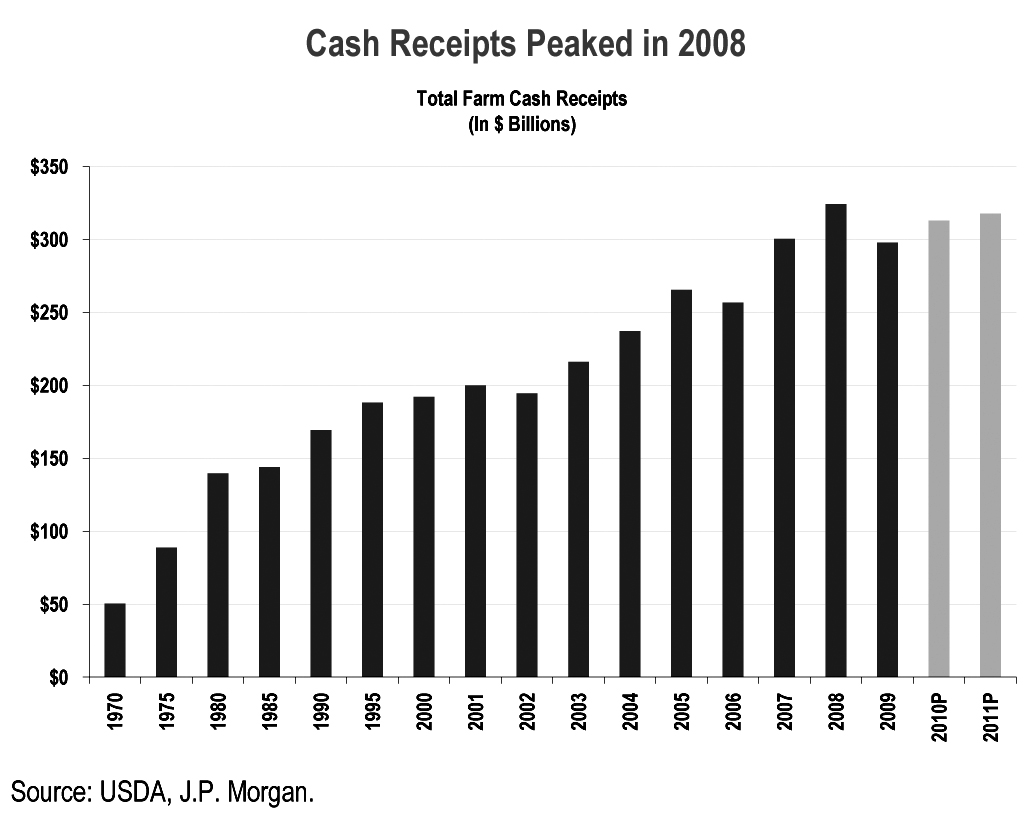