Looking Back to Look Forward: Predictions on Autonomy from 2011

This 2011 article, A Report From 25 Years Hence, predicting the future of farm autonomy was cited in examining autonomy’s state in 2023.

Editor’s Note: Dr. John K. Schueller. Professor of Mechanical and Aerospace Engineering and Affiliate Professor of Agricultural and Biological Engineering, University of Florida, recently commented on Mike Lessiter’s “To the Point” editorial in January 2023 Farm Equipment, “Autonomy: Are We There Yet?”  Farm Equipment received permission from ASABE to re-share the article from its Resource Magazine, January/February 2011. www.asabe.org

The typical U.S. crop farm of 2035 is not that different from the typical farm of 2010, in the same way that the 2010 farm was not the artificially intelligent, self-sufficient, robotic paradise that many predicted way back in 1985. But the continued application of effectively free computing power and the surprisingly slow, but steady, development of additional sensors and algorithms have converted farm workers from operators to supervisors who exhibit practically omniscient telepathy and telekinesis with each other and with the farm’s equipment. The evolution of data handling and control capabilities followed the paradigm of the proliferation of computers in facilitating great flexibility. Current production systems go far beyond 2010 precision agriculture and allow timely, sustainable, profit-maximizing, strategic and tactical responses to spatial, temporal, weather, and market variabilities.

For example, although controlled traffic is practiced to minimize the soil area that is affected by equipment, the cultivars (and even the crops) within fields are varied in response to variations in soil, water, and topography.

The long-term trend of farm consolidation continues, as the economies of scale and the concentration of assets to economically astute managers were not effectively overridden by sociopolitical concerns about monopolization of the food supply. Given the need for timeliness in these large farms, field operations are very fast and productive. Consequently, the 2035 farm is in some respects an efficient materials handling operation. Huge quantities of fertilizers and other inputs are delivered in the spring, and even larger quantities of grain are trucked off the farm in the fall. The multiple robotic vehicles that transport these materials between staging areas and the equipment in the fields are even less supervised by the farm workers than the planting, crop protection, and harvesting machines. As a result, although the machines have advanced sensors and redundant remote shutoffs, access to the fields is strictly controlled due to safety and liability concerns. 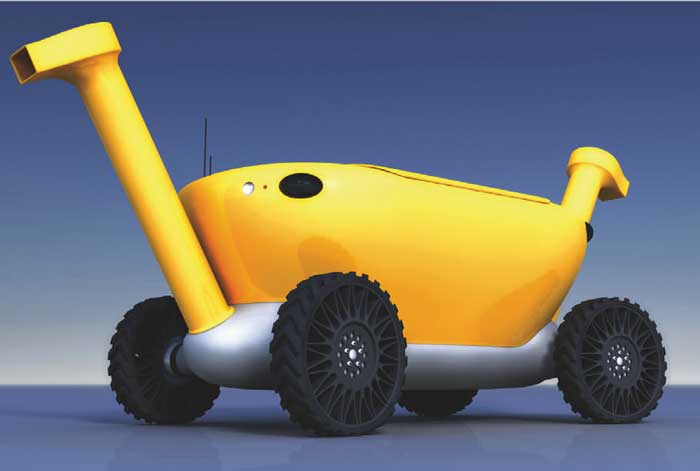 Drone aircraft, with wingspans of just ten centimeters, carry vision and spectroscopic cameras over the fields at frequent intervals. Other than that, the need for high productivity and materials handling requirements did not allow the proliferation of herds of small, robotic agricultural equipment, as predicted in 2010.

In fact, average equipment productivity continued to increase, although most of the increase was due to automation, advanced materials, and 24-hour operation rather than the moderate size increases limited by roads, facilities, and other constraints.

The most challenging aspect of attempting to increase food production, in response to increasing population and increasing per capita demands, has been responding to pests’ increasing resistance to pesticides at a time when new pesticide modes of action are not being approved. Both traditional and robotic mechanical weed control have become commonplace. Rather than an integrated pest management model based on economic thresholds, a “no tolerance” model has become widespread. All weeds on the farm are removed to reduce future seed banks. Given the larger farm size, the perimeter over which weed introduction has to be strictly controlled is not a large percentage of the farm area. Insect and disease infestations, while minimized through the use of new highly resistant cultivars, sophisticated control technologies, and large-scale rotations and isolations, remain a management challenge.

Although biomass removal is limited as a part of sustainability considerations, the farm is a net exporter of energy. Where appropriate, a large mobile pyrolysis unit travels through the fields after harvest, generating liquid and gaseous fuels for farm use and external sale. In addition, the federal government pays the farmers for the carbon sequestered as pyrolysis biochar if the soil limit for biochar in that field has not been exceeded. Once every six years, the pyrolysis unit is operated in the much slower “full-consumption” mode in which all the biomass is consumed to generate heat to sterilize the soil.

As in 2010, in 2035 there is a huge variation in agriculture between countries, within countries, and even from neighbor to neighbor. This farm, while typical of an average (not advanced) farm, represents just one of many different existing models of technology adoption and management. However, it is worrying that plant agriculture (and animal agriculture) continues to reduce genetic and cropping system diversity. Already struggling to feed 8.5 billion people an advanced diet on less arable land than in 2010, the stability and robustness of the world’s food production system are becoming questionable. Your Customer Wants You to Know...