Case IH informed its dealers on Oct. 8 that effective immediately Scott Harris has taken over the role of Global President of the Case IH brand. Harris will replace Brad Crews who has moved fully into his position as the President of the North American region for CNH Industrial.

“Scott Harris’ strong leadership in North America has made a significant impact on the Case IH brand,” said Derek Neilson, CNH Industrial president of agriculture. “As we look to the future, at both Case IH and the agriculture industry as a whole, we are excited for him to make his mark across the globe.”

As Case IH global president, Harris will lead the overall strategy for the brand with a strict focus on customer-centric brand building, brand marketing and communications, overall digital customer experience, and the Case IH solutions portfolio. He will coordinate activities with Case IH and CNH Industrial leadership across all regions.

“With a rich background rooted in agriculture, Kurt Coffey is committed to supporting North American producers through a strong brand approach along with the right iron and technology solutions,” Harris said. “His experiences in the industry have made him an exceptional leader, and we look forward to Coffey’s continued future with Case IH.”

Coffey holds a bachelor’s degree in agricultural business from Illinois State University. He remains actively involved in his family’s grain-farming operation in central Illinois, bringing a customer-centric collection of agriculture industry experiences to his new role.

When Coffey took over his role as VP of Parts & Service, it was to replace Harris who had recently been named VP of Case Construction.

Full memo that was sent to dealers is below. 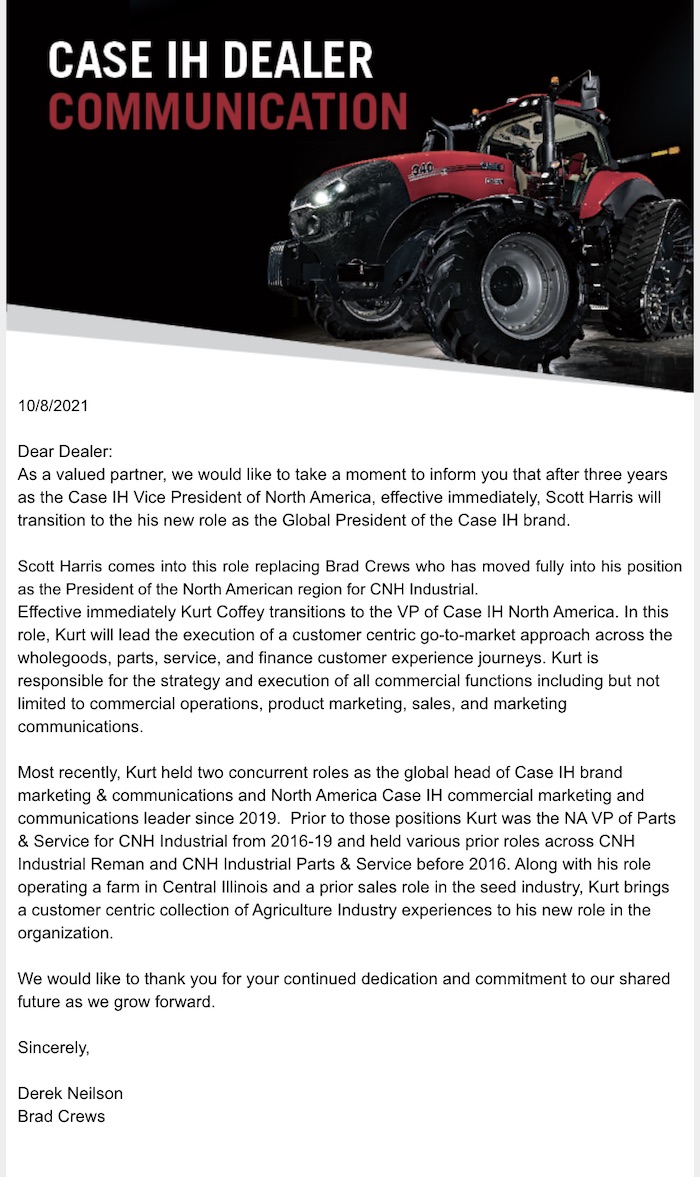 ‘Producer-First’ Partners to be Mantra of New Case IH Exec: After 12 years of dealers (partners as Scott Harris calls them) accustomed to the same personality at the top, Harris bring a familiar yet fresh approach as the new leader of Case IH Agriculture’s North American dealer network. Read more.