This year’s Farm Equipment Dealer Business Outlook & Trends survey saw significant changes relative to last year’s survey. Projections for next year’s new and used equipment sales were up compared to the 2021 survey, as well as forecasts for early orders and equipment price increases.

Considering the strength of the ag equipment market at the moment, driven by a sharp economic recovery following the crash that came with the COVID-19 pandemic, the results make sense. Farmers’ government payments, coupled with struggling equipment supply chains creating an equipment shortage, have created the perfect storm for an equipment seller’s market. What remains to be seen, however, is if the increasingly positive outlook for 2022 will come to fruition.

For the moment, it seems as though the impact of the overwhelmed supply chain will continue into the foreseeable future. A September 2021 report from Ag Equipment Intelligence quoted John Deere Director of Investment Relations Josh Jepsen as saying, “As we expected a quarter ago, we noted we thought the back half of the year would be more challenging. That’s exactly what we saw. We saw more disruptions, more impacts to production, where we were losing days of production at different facilities at different times throughout the quarter. And we think that continues; we don’t see that easing up as we get into the fourth quarter and into 2022.”

Dealers’ forecasts for 2022 new equipment revenue were much higher than either of the 2 previous years, with 53.1% of surveyed dealers expecting new equipment revenue to be up by at least 2% year-over-year. This surpassed the 42.4% who thought the same in last year’s report and the 41.7% in the 2019 report. 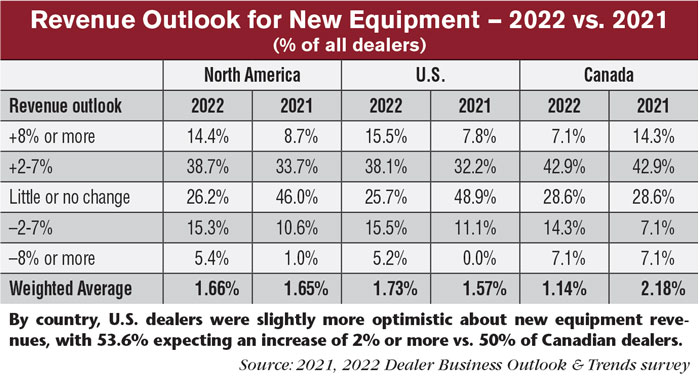 A little over 26% of dealers estimate there will be little to no change in new equipment revenue for next year, a 5-year low.

Some 21.4% of Canadian dealers forecast new equipment revenue down 2% or more, above the 20.7% of surveyed U.S. dealers who forecast the same.

Some 1% of this year’s surveyed dealers expected no price increase from their OEMs in 2022, showcasing the severity of current price increases as global supply chains struggle to meet increasing demand. 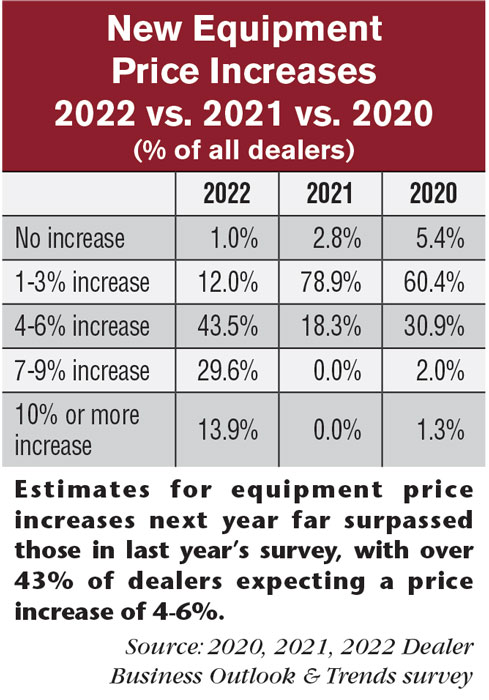 Nearly 14% of surveyed dealers are forecasting a price increase of 10% or more from their OEMs next year vs. none in last year’s report and 1.3% in the 2019 report. Nearly 30% of surveyed dealers are expecting an increase of 7-9%, far surpassing the 0% and 2% who expected the same increases in the two previous reports. With 43.5% forecasting 4-6% increases and 12% forecasting 1-3% increases, only the 1-3% category saw decreases from the two previous studies as dealers moved their forecasts higher. 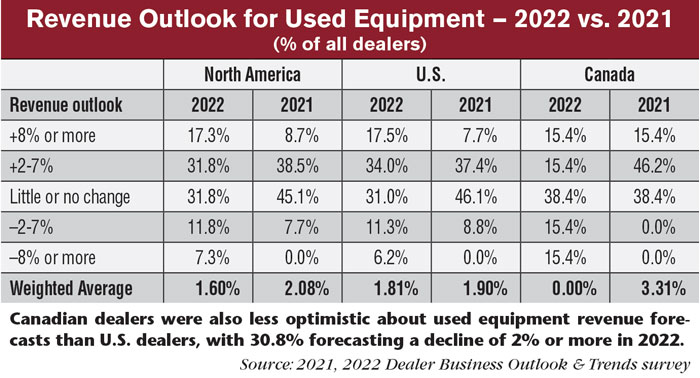 With the ongoing equipment shortage, early orders have become an increasingly important part of how dealers are doing business. As a result, this year’s early orders results are up significantly vs. last year. 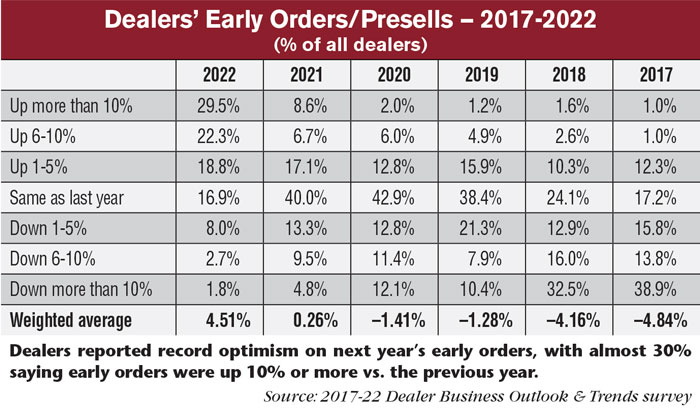 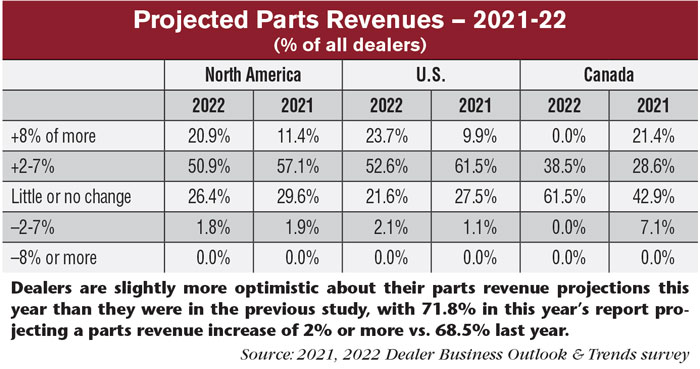 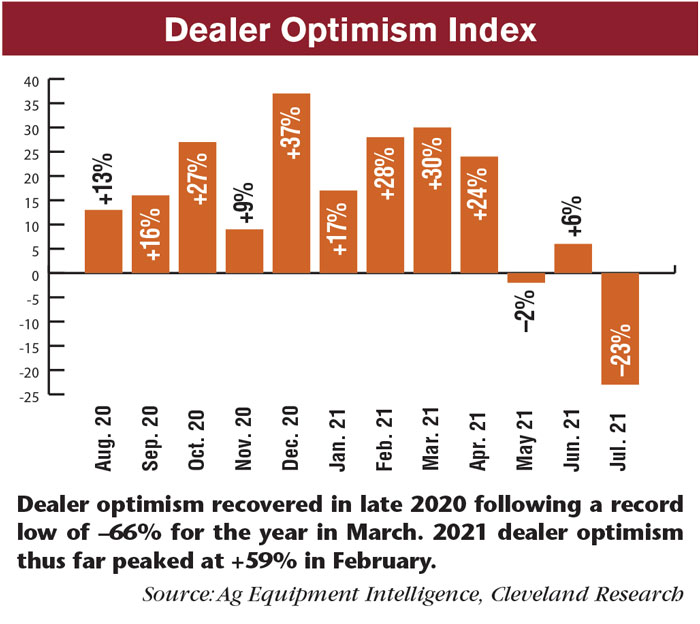 Comments from the most recent Dealer Sentiments report show dealers are most concerned about having equipment to sell to their customers and OEMs increasing prices. One dealer from the Southern Plains says, “We are less optimistic as inventories run low at the dealer level and within the manufacturers' shops. We are also concerned about the general well-being of the economy, especially inflation into next year.” Another dealer from the Northeast says, “Sales continue to be strong despite working through supply issues with the manufacturers. The OEMs are pushing further price increases each month.” One dealer from the Lake States mentioned all their OEMs issuing double-digit prices increases. 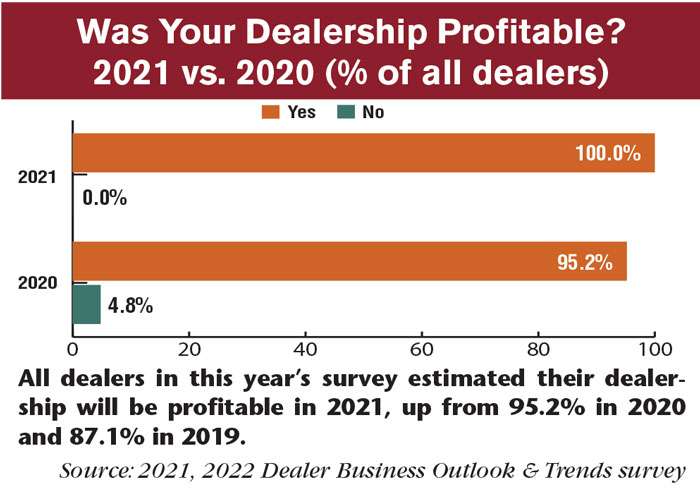 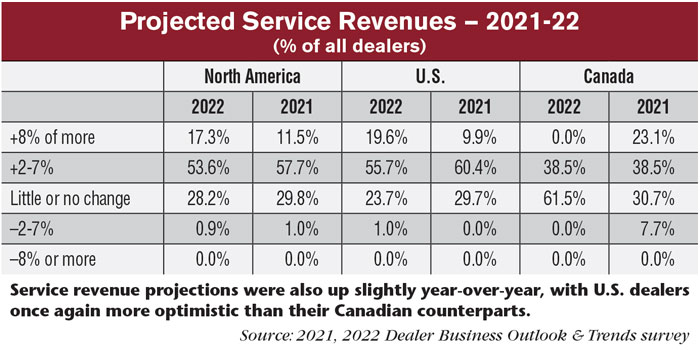 Canadian dealers were notably less optimistic in this report, with 38.5% forecasting used equipment revenue up vs. 61.6% in last year's survey. 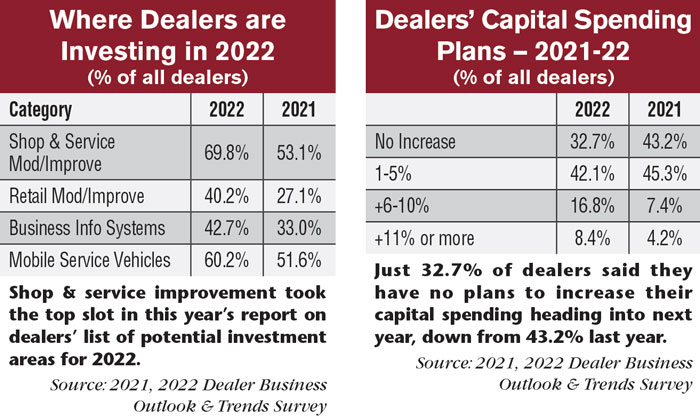 When asked where they plan to invest in 2022, shop and service improvements was dealers’ top choice with 69.8% selecting it as an investment plan. Mobile service vehicles took the second slot at 60.2%, followed by business info systems at 42.7% and retail modifications/improvements at 40.2%. Investment was up in all categories year-over-year, with the largest was in the shop & service from 53.1% of dealers indicating they planned to invest in this area last year. 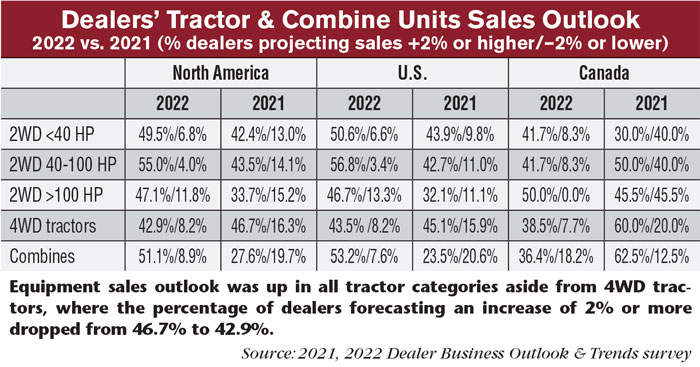 Notable changes in this year’s lineup included field cultivators going from #8 last year to #4 in the most recent report, while forage harvesters moved from #9 to #5. 2WD 40-100 horsepower tractors saw a jump in ranking as well, going from #12 last year to #6.

Some of the largest drops in ranking came from Precision Farming Systems (#2 last year to #18), round balers (#6 to #17) and lawn/garden equipment (#3 to #14). The lowest percentage of dealers forecasting unit sales to remain the same or better was for 2WD over 100 horsepower tractors at 88.2%, well above the lowest percentage recorded last year (combines at 80.3%). 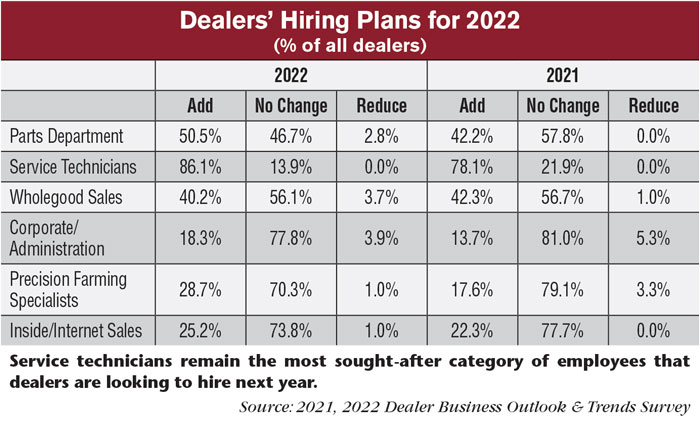 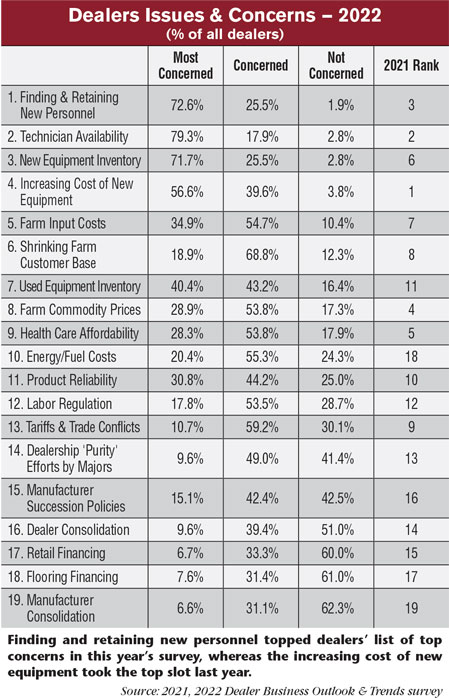 Other notable changes to the list included used equipment inventory rising to #7 from #11 in last year’s report, energy/fuel costs rising to #10 from #18 and farm commodity prices dropping from #4 to #8.