After a unique and difficult year, dealers are reporting they beat last year’s forecasts for 2020 and are indicating 2021 will see even more growth.

It’s been a strange year for dealers to say the least. Not only are dealers following a particularly wet and difficult planting season in 2019, but now they’re facing the long term effects of a global pandemic, as well as an election year in the U.S.

In spite of all that, results from the Ag Equipment Intelligence/Farm Equipment 2021 Dealer Business Outlook & Trends survey show dealers not only beat last year’s estimates for profitability in 2020, but they’re now predicting greater revenue growth in 2021 than they did for 2020.

When examining the results from the 2021 Dealer Business Outlook & Trends survey, it becomes apparent that more dealers are shifting away from a negative outlook on new equipment revenue.

The more notable change comes from those forecasting little to no change in new equipment revenue, which came in at 46% in this year’s survey. This surpasses both the 36.8% recorded in last year’s survey and the 41.7% recorded in the survey conducted in 2018. 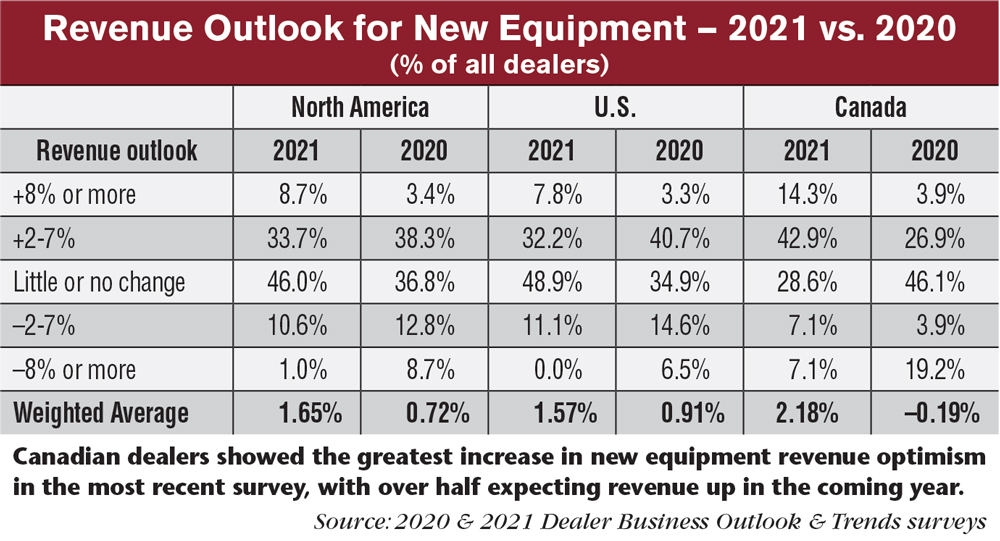 The percentage of Canadian dealers expecting declines in their new equipment revenue was down compared to last year. Some 14.2% forecast revenues down for 2021, whereas 23.1% forecast them down for 2020. 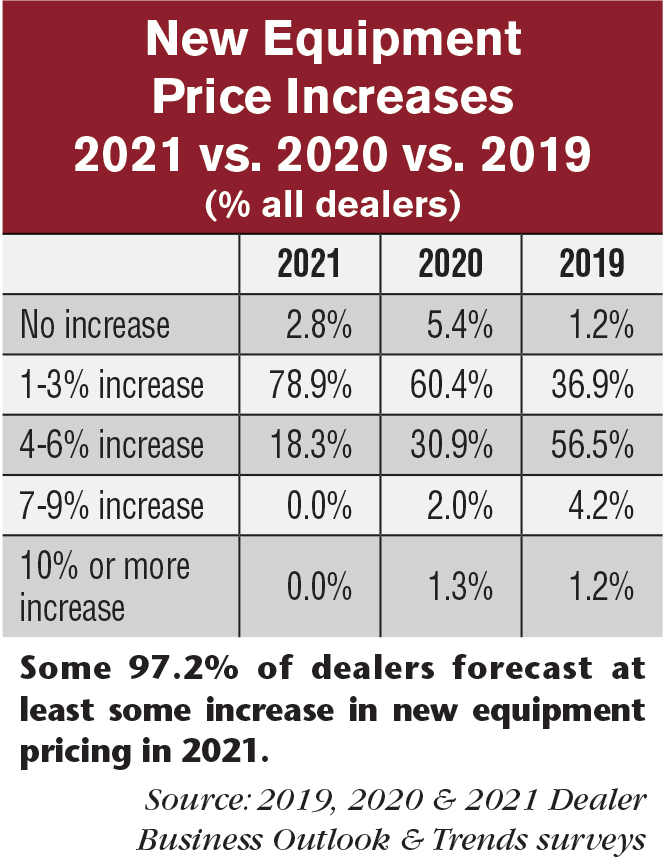 Dealer Sentiment Up Despite Economic Trouble

Dealer sentiment bounced back sharply in May from the double-digit decreases seen in March and April as the initial stages of the COVID-19 pandemic hit North America. Ag Equipment Intelligence’s “Dealer Optimism Index,” which measures sentiment among dealers compared to the prior month, came in at +13% (31% more optimistic, 51% the same level of optimism, 18% less optimistic) in the September Dealer Sentiment & Business Conditions Update, the second highest reading the index has seen in the last 12 months. 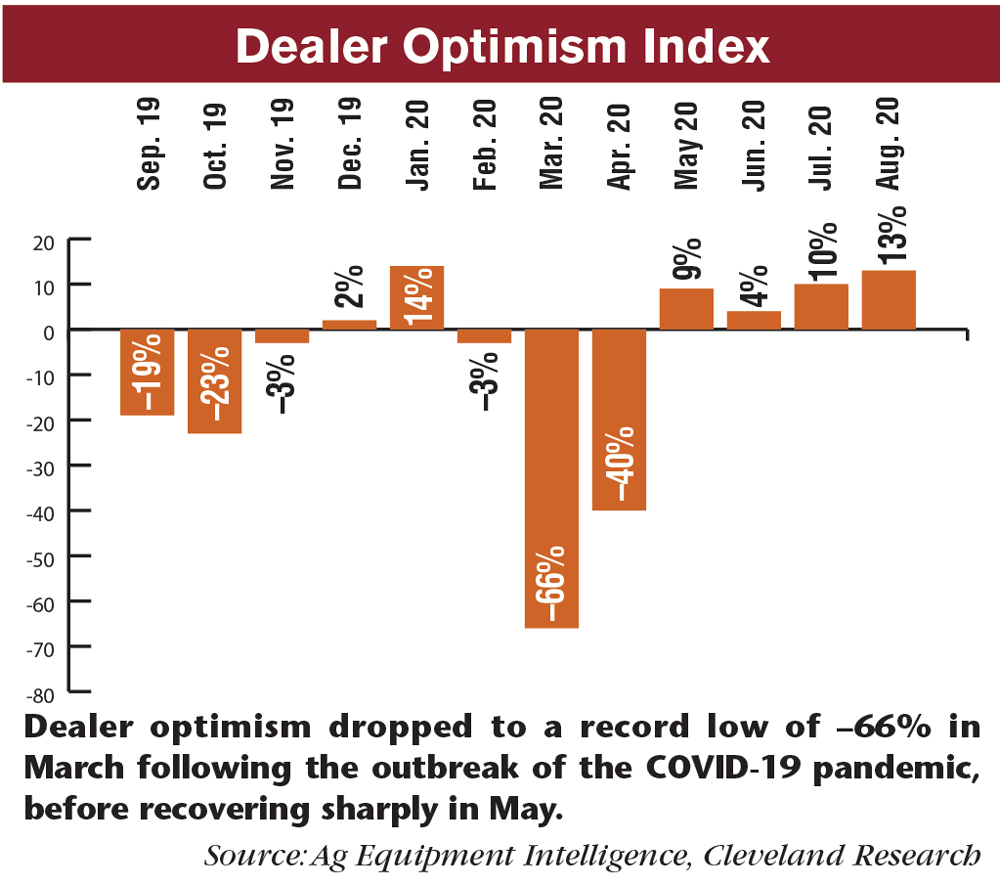 Dealers are not only more optimistic in general, but survey results show they’re particularly confident about their profitability for the year. Results from the 2021 Dealer Business Outlook & Trends survey show nearly all dealers (95.7%) are forecasting their dealership will turn a profit in 2020, an uptick from the 87.1% who estimated they’d be profitable in 2019. This also surpasses the 89% who indicated they’d be profitable in 2018. 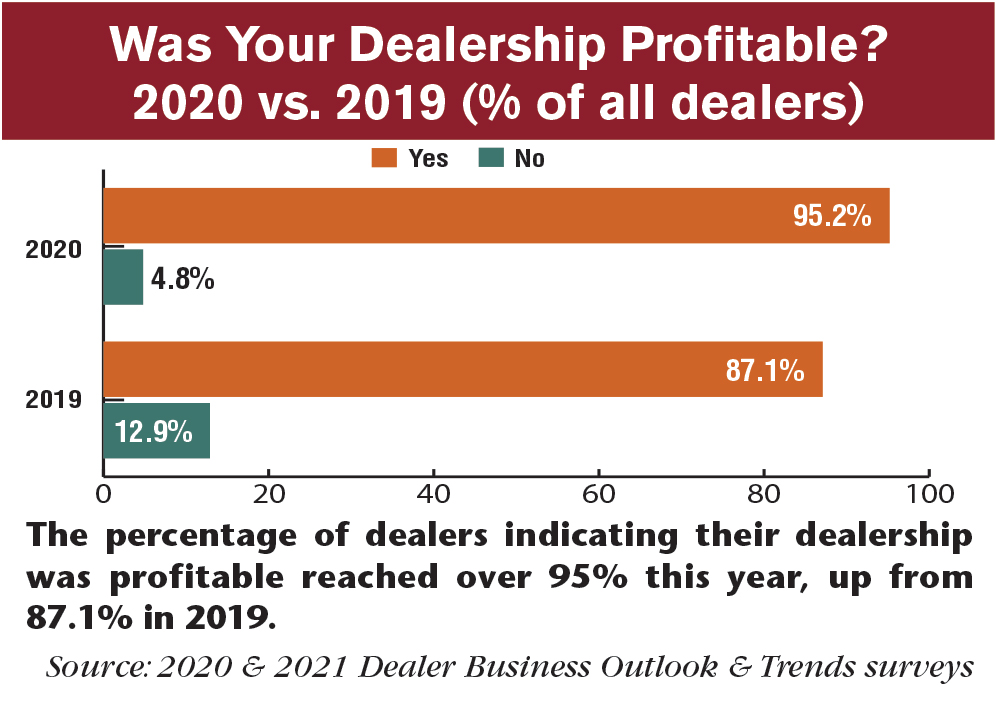 The outbreak of the COVID-19 pandemic in March was a sharp blow to the global economy in general, including the health of the ag equipment market. Dealerships and manufacturers were thrust into a limbo of uncertainty, starting with a fight to be deemed “essential” by the FDA, followed by crashing farmer sentiment and falling commodity prices.

Dealer commentary from Ag Equipment Intelligence’s April 2020 Dealer Sentiment & Business Conditions Update sheds light on dealers’ worries in the initial stages of the pandemic. One dealer from the Delta States said, “Coronavirus changed our business immediately. Our customer base is uncertain about the general well-being of the economy and have delayed or stopped purchases.” Another dealer from Canada mentioned manufacturer production halts, saying, “Product availability is concerning. Pre-sold units on order are now being pushed back a minimum of 3 weeks due to plant shutdowns.”

Commodity prices dropped at the start of the pandemic, something one dealer from the Pacific region drew attention to back in April, saying, “Milk and cattle prices are plummeting due to restaurant closures.” Corn prices dropped as well, partly due to a decrease in ethanol demand as gasoline consumption declined amid state-wide “stay at home” orders.

Canadian dealers once again showed a strong uptick in sentiment, with 61.6% of them forecasting used equipment revenues up in 2021, more than double the 26.9% who forecast increases for 2020. The percentage of Canadian dealers expecting used equipment revenue up 8% or more next year rose from 7.7% in 2019 to 15.4% in the most recent survey. Canadians expecting used revenue up 2-7% also more than doubled since last year, from 19.2% to 46.2%. 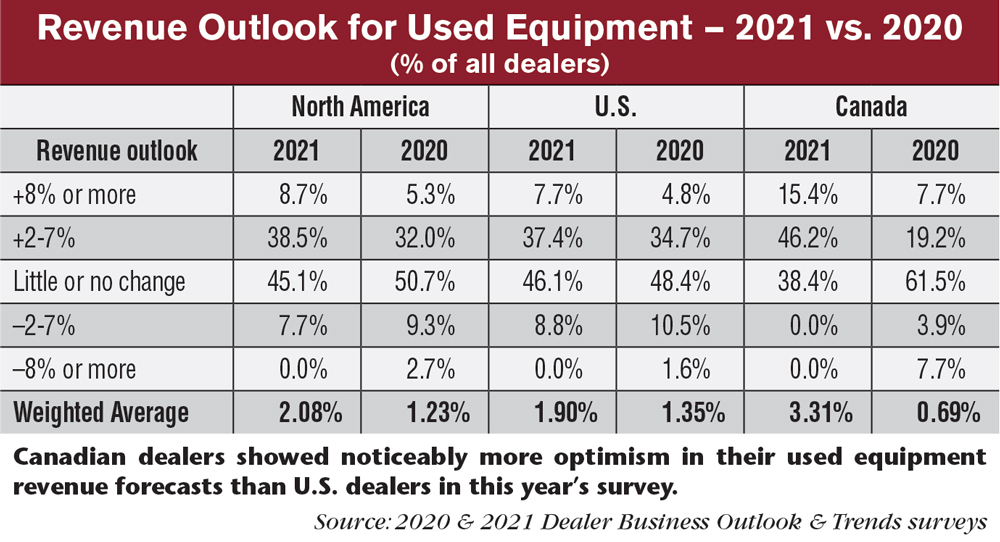 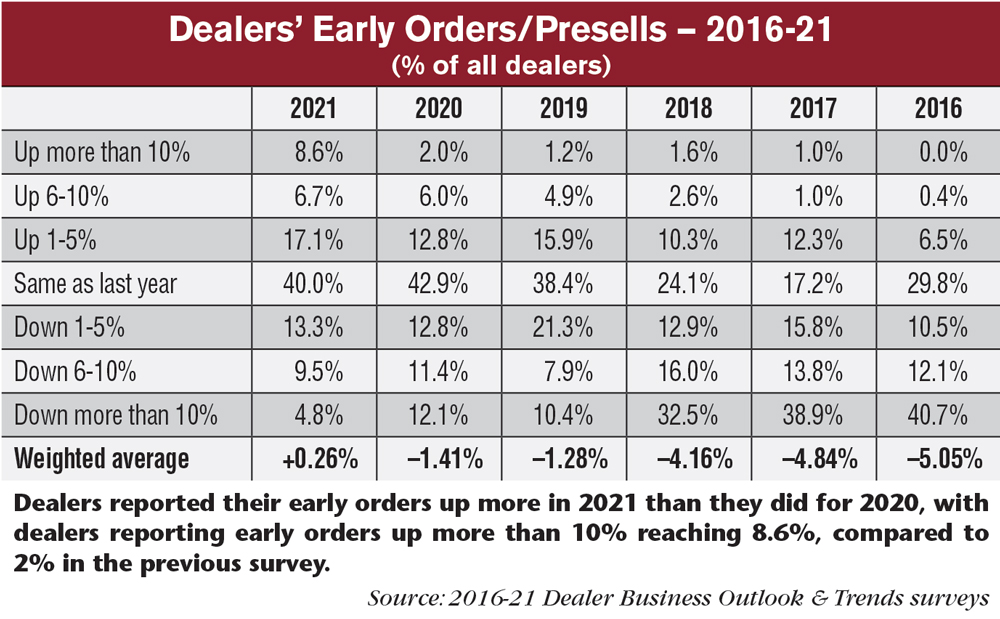 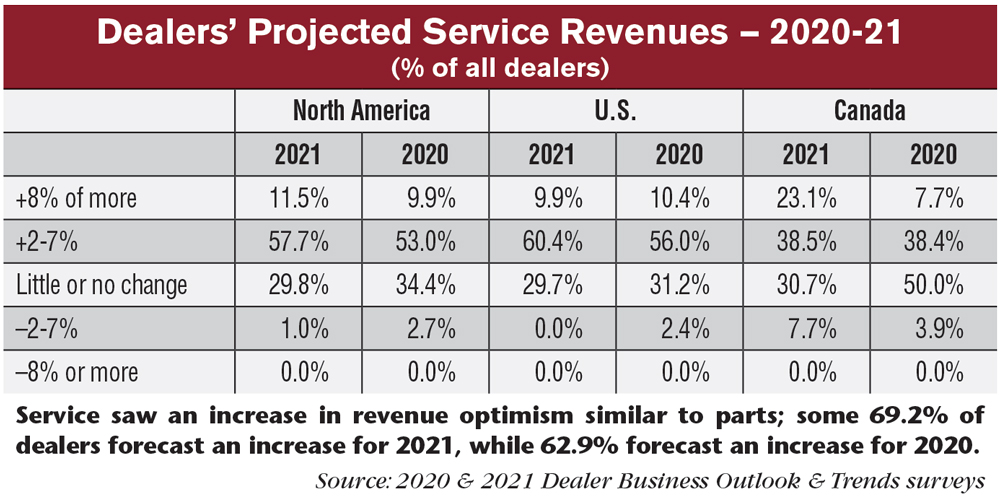 Tractor & Combine Sales on the Rise

More dealers are betting on increasing tractor and combine sales for 2021 than they did for 2020 nearly across the board. There was only one instance of decreasing forecasted sales growth: under 40 horsepower tractors, where some 30% of Canadian dealers forecast growth compared to 44.4% in last year’s survey.

Otherwise, optimism was noticeably up compared to last year’s forecasts for 2020. 4WD tractors had the greatest overall increase in optimism, coming in at 46.7% of North American dealers expecting 2% growth or more in 2021, compared to just 26.4% in last year’s survey.

The percentage of U.S. dealers expecting some form of sales growth in the coming year rose in all equipment segments, with the largest being in 4WD tractors (27.8% last year vs. 45.1% this year). The 40-100 horsepower tractor segment showed the smallest increase, rising to 42.7% from 41.6% last year. Combines also saw a similar increase in the percentage of U.S. dealers forecasting sales growth, reaching 23.5% from 22.1% last year.

Dealers’ best bets for improving unit sales in 2021 showed many top ranking categories maintain their high ranking from last year (see pg. 26). Farm loaders jumped from second last year and became dealers’ #1 category for increasing unit sales next year, with 93.9% indicating unit sales would be the same or better in 2021. Precision farming systems lost its first place slot, becoming dealers’ second best bet for improving unit sales; 93.8% of dealers bet on this category to remain the same or improve unit sales next year. Lawn and garden equipment held on to its spot as dealers’ third best bet, receiving a vote of confidence from 93.3% of surveyed dealers.

There were some notable shifts in ranking from last year’s survey. Windrowers/swathers, which ranked #17 on dealers’ list of best bets last year, jumped all the way to fourth in this year’s survey, receiving optimistic forecasts from 88.6% of dealers. Field cultivators also received a boost in ranking, from #18 last year to #8 this year, receiving positive forecasts from 86.8% of dealers.

Not all changes were positive, however. Tractors in the 40-100 horsepower range, which ranked fifth last year, dropped down to #12 on this year’s list, receiving a vote of confidence from 85.9% of dealers. Rectangular balers dropped from #8 last year to #15 this year, while pull-type sprayers saw the greatest decline: from #9 last year to #18 this year. 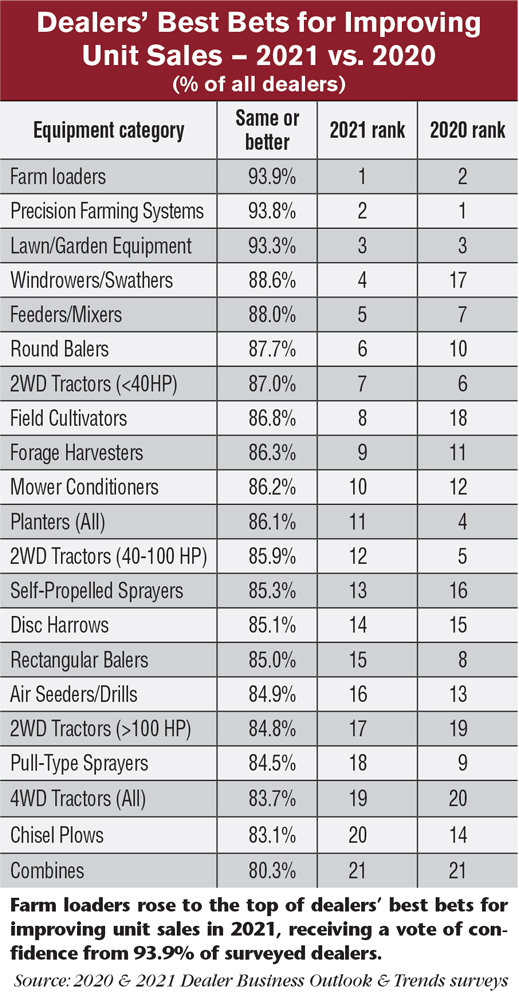 Cost of New Equipment Tops List of Concerns in 2021

Dealer’s top issues and concerns heading into the new year were mostly unchanged from the 2019 survey results. The increasing cost of new equipment maintained its top spot on the list as the #1 concern, as did technician availability at #2, finding and retaining new personnel at #3 and farm commodity prices at #4. 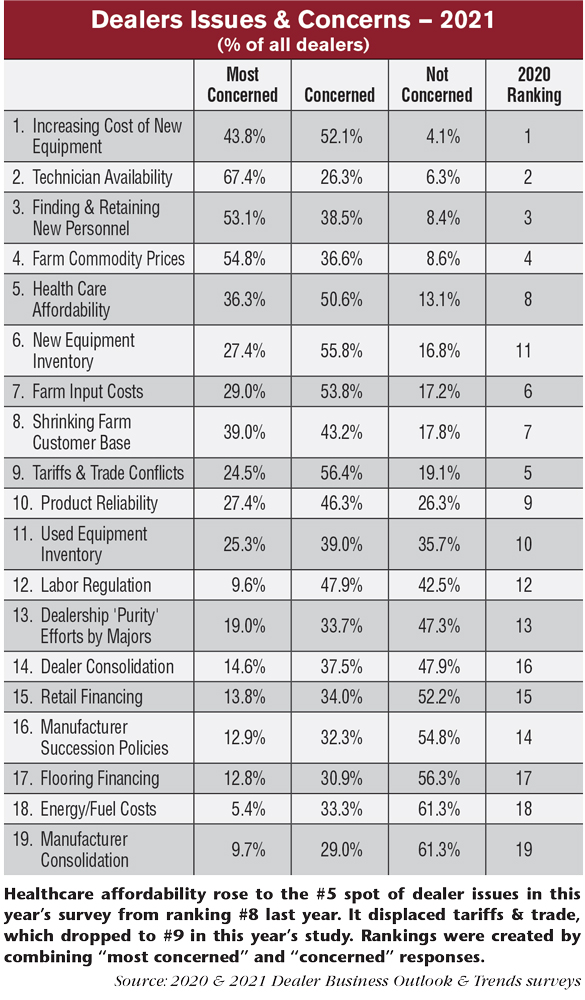 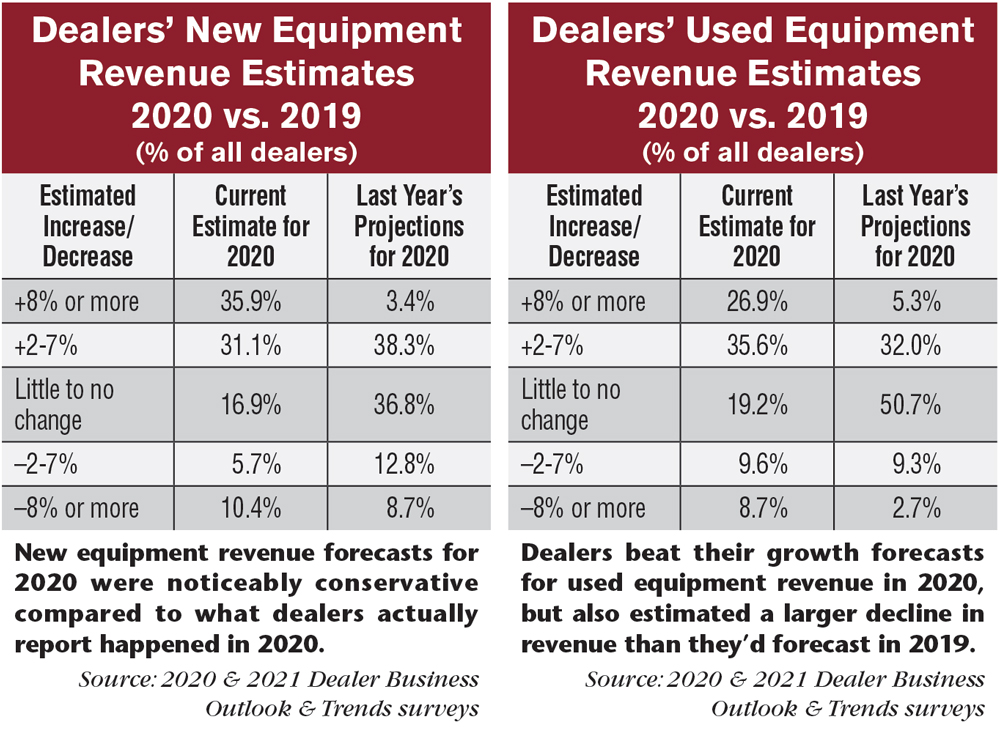 Used equipment revenue showed a similar difference between last year’s forecasts and the current estimates. Around one third (37.3%) of dealers in 2019 thought they’d see more revenue from used in 2020, while the most recent survey shows 62.5% estimate they’ll see used revenue growth this year. The largest shift in dealers projecting growth came from those estimating revenues up 8% or more, which went from a 5.3% forecast last year to a 26.9% estimate this year.

The percentage of dealers expecting little or no change in used revenue was also more than cut in half, from 50.7% in last year’s forecasts to 19.2% in the recent estimates for 2020. Dealers expecting used revenue down 2-7% was mostly unchanged (9.3% forecast last year vs. 9.6% actual this year), but those expecting declines of 8% or more rose from 2.7% last year to 8.7% looking back in the recent survey. In total, 12% of dealers last year thought they’d be down in their used revenue in 2020, but 18.3% are now estimating that’s how they’ll finish the year. 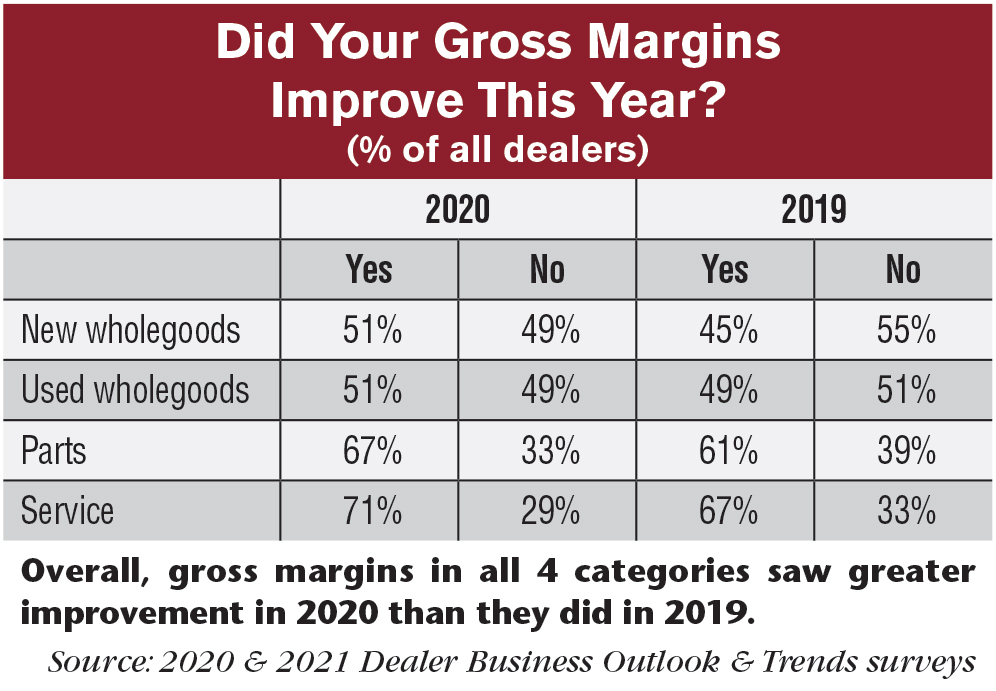