Report Weighs Opportunities and Risks of Betting on Industrial Hemp

No one in agriculture — growers, equipment dealers or manufacturers — has been able to avoid the hype surrounding the potential market for industrial hemp. This is the focus of an October 2019 report from CoBank that examines the prospective opportunities and risks associated with exposure to this promising crop.

The report points out that “Any nascent industry has inherent risks, but regulatory and legal hurdles compound the risks for the hemp industry. However, with big risks can potentially come big rewards.” 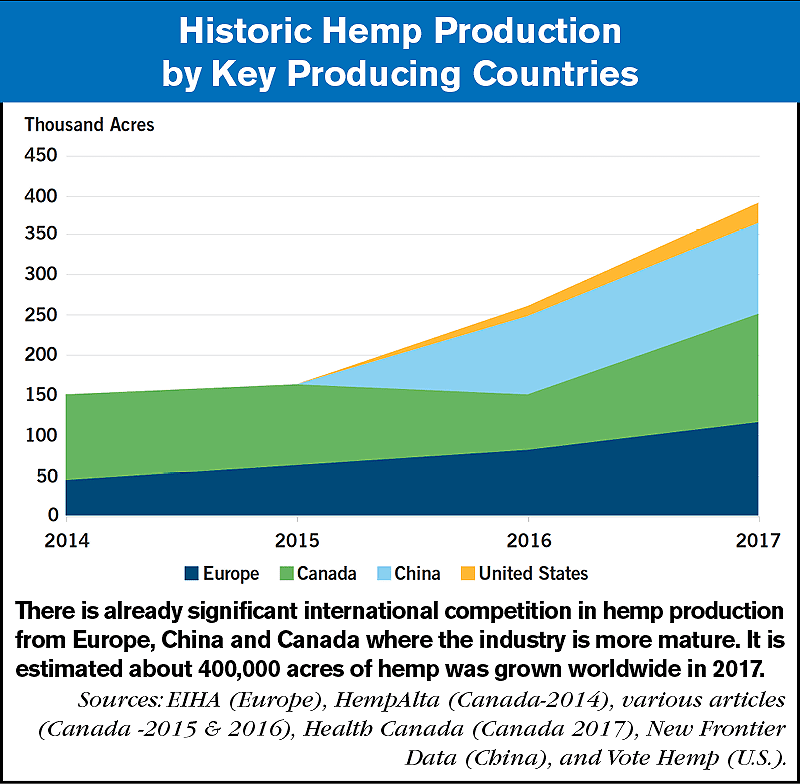 The three major applications for industrial hemp are fiber, grain and seed, and CBD (cannabidiol). Of these, CBD is driving current market growth. But of these three markets, the CoBank report says fiber has the best potential long term market opportunities. The biggest barrier to growth of hemp fiber is the lack of processing capacity today. “Grain/seed hemp has more stable risks and demand markets than hemp fiber or CBD, but not the growth potential of either.”

According to the report, of the three major markets for industrial hemp, CBD demand is currently driving hemp’s rapid growth as it is being promoted as a “cure-all” for a multitude of health issues and ailments.

The report goes on to say, “Despite relatively loose enforcement, CBD is still federally illegal in food, beverages and dietary supplements. The Food and Drug Administration (FDA) recently announced it will speed up efforts to create a regulatory framework. In reality, permanent regulation is not likely to happen within the next year, as long term impact studies are needed to determine safety and efficacy of therapeutic claims.”

Estimates of CBD sales vary widely, from $1.8 billion to $22 billion by 2022. But the per-acre value of hemp for CBD can be tricky to ascertain.

The report points out that, for the most part, farmers are taking on the majority of the up front risks. Prices depend on the percentage point of CBD concentration within the dry flower. According to CoBank, in 2018 this typically ranged between $3-$5 per percentage point. “For 10% CBD yielding 2,000 pounds of dry flower per acre, that equates to $60,000-$100,000 of gross revenue per acre.” 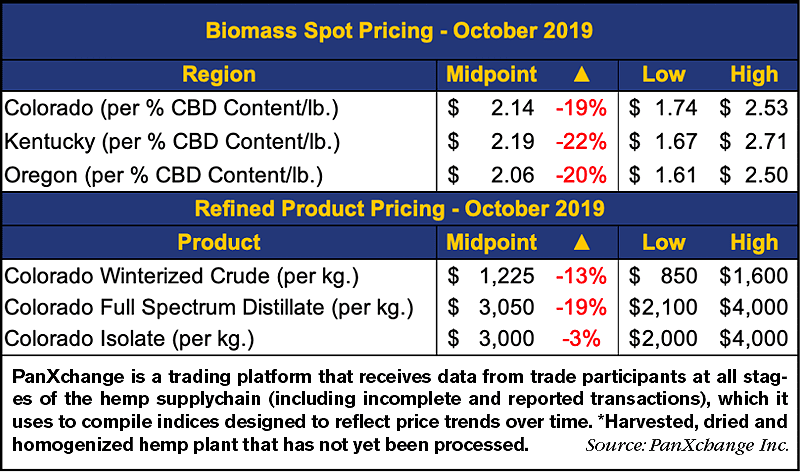 Textiles and biocomposites are said to offer longer term demand potential for industrial hemp. For example, Levi’s is working with the material for its products and as a competitor to cotton. Automaker BMW is using hemp-based biocomposites in conjunction with thermoplastics. The company claims the resulting material is stronger than steel, reduces vehicle weight, which increases the distance electric cars can travel between charges.

The CoBank report maintains that grain/seed hemp currently has a better rate of return than fiber but less than CBD. “Grain/seed hemp has more stable risks and long term prospects than hemp fiber or CBD, but not the growth potential of either. Hemp seed is claimed to be a super food that is high in fiber, protein, omega-3s and essential fats.

It adds that “hempseed cake could potentially be a viable protein source in animal feed once it is approved by the FDA as a commercial feed ingredient. Its protein content is typically cited at around 30%, which is less than soybean meal, but studies show hemp seed is a more digestible protein.”

The CoBank report goes on to list significant risks, including international competitors from Europe, China and Canada where the industry is more mature. It estimates there were about 400,000 acres of hemp grown worldwide in 2017.

The editors of Ag Equipment Intelligence have released their newest custom research report: Industrial Hemp: Possibilities & Potential for the Ag Equipment Industry. The 70 page report includes data and commentary from farmers, dealers and manufacturers who were surveyed and interviewed in preparing the new study.

It is available for sale by going to www.AgEquipmentIntelligence.com/HempReport. Ag Equipment Intelligence subscribers receive a 50% discount off of the full price of the report.

Another difference that growers face that could potentially be a stumbling block is that a majority of hemp will be grown under contract with legally enforced specifications. This isn’t the norm for most field crop producers, but must be a strong consideration.

The biggest hang up for those producing hemp for fiber applications is the lack of processing infrastructure. Despite the growing popularity of hemp and the potential for its use as a fiber, until textile and other applications are market tested and accepted by consumers, there probably won’t be a rush to invest in additional hemp processing.

As the report explains, “Hemp fiber has a severe shortage of processing infrastructure. Most CBD processing is not currently at an economically efficient scale, but this shortcoming is being addressed to some extent.”

At the same time, until the FDA determines final regulations, this will “increase the risk profile of lending to CBD processors, particularly in cases where CBD would be the primary source of collateral.”

The willingness of lenders to go out on a limb for this emerging segment of agriculture could be its biggest hurdle to get over.